When a music fan thinks of the "Quadraphonic Sound" of the 1970's, and even today's modern 5.1 sound options, one of the first music titles that come to mind is Pink Floyd's "Dark Side of the Moon" album. Released in 1973, this album combined thematic music with a myriad of sound effects and spoken passages that has entertained listeners for the past 30+ years. Many have spent hours listening with headphones, while others listened as stereos and boom boxes played their LPs, cassettes, and 8 tracks. When the CD format arrived, this was one of the first titles to get released, earning the first catalog number used in the US by Capitol: CDP 40001.

A special few, however, got to hear this work with more than two channels, as it was originally conceived. When the album was recorded, engineer Alan Parsons created a discrete 4 Channel mix that was to be used for commercial LP and tape release in the new "Quadraphonic" systems. Pink Floyd had been using surround in their stage presentations of this music, so it seemed quite logical that the fans be able to hear it as it was meant to be heard.

EMI owned the rights to all Pink Floyd material throughout the world, with the exception of the United States. In the USA, Pink Floyd titles were released on the Capitol label, originally controlled by EMI. In the early 1970's, there were competing formats for quadraphonic records. Early matrix systems competed with discrete tape, and soon JVC came up with a discrete format for the LP, the CD-4 system. With 3 major systems to choose from, many labels vacillated between choices, waiting to see which one would be the "victor". Columbia championed its' own SQ system, while RCA pushed the discrete CD-4 system. Some labels, like A&M, used both SQ and CD-4, as well as the third system from Sansui, the QS system. EMI decided to use the CBS SQ system throughout the world, and "Dark Side of the Moon" became available in the UK, Europe, and Australia as an SQ LP. Interestingly enough, in Japan, it was released using the RM matrix system, which was the system that Sansui based their QS system on. In the USA, however, Capitol did not release "Dark Side of the Moon" as a quad LP**. They did, however, release it as a quad 8-track tape. This, however, is where the story gets interesting.

Alan Parsons had created a vibrant, discrete mix of "Dark Side of the Moon". Those that have heard it will attest to the fact that it is quite remarkable, and surely a masterpiece when we consider the equipment available to him during 1973. (There is an interesting article called "Four Sides of the Moon" that details the creation of the mix.) When this discrete mix was finished,  EMI created the master for the worldwide SQ LP release by encoding the discrete master tape using an SQ encoder. This device mixed the front and rear channels together, combining them into a compatible stereo track that could be pressed onto LPs and be subsequently decoded by a proper decoder, resulting in the playback of the original mix. In theory this sounded good, but the encoding and decoding equipment was far from perfect. Once the tracks were mixed together, they could never be decoded to the point where they were totally discrete as was the master tape. Even the modern "Full Logic" decoders that emerged in the 1980's could not reproduce the exact mix that existed on the master tape.

In the UK, EMI created their Quad 8 Track from the master discrete tape, thus creating the only commercially released version of this classic. Since quad tapes were sold in very small numbers in the UK, an instant collectible was created. The UK DSOTM Q8 usually sells for over $500 when it changes hands. As you can see from the illustration below, this tape presents the quad mix in a totally discrete fashion.

In the USA, Capitol, for some reason, received the SQ master tape to "Dark Side of the Moon". Why they received this tape is unknown, as there was never an intended SQ release for the USA (Capitol never decided on a format to release quad LPs, and although they released a few sampler LPs using the CBS SQ system, no commercial titles were ever released)  In an incredibly stupid move, Capitol took the SQ Master Tape and used it to master their domestic Quad 8 Track! They simply decoded the SQ reel using an SQ decoder, then mastered the US Q8 from the decoded source. This resulted in a "less than discrete" tape.

The US Capitol Q8 of "Dark Side of the Moon" is a decoded tape.

Consequently, in the USA, the only quadraphonic release of DSOTM was the compromised Capitol Q8. Although it actually sounds pretty good to the unknowing, the UK Q8 blows it out of the water. The Alan Parsons mix used to create both tapes was not used to create the current 5.1 Super Audio CD, as the group preferred to have their current engineer James Guthrie create a new 5.1 mix to match the capabilities of the SACD format. While the SACD is astonishing in it's own right, the original Alan Parsons mix remains a favorite of fans, as it is known to be more "aggressive" in its' use of the surround channels.

ABOVE: The UK Q8 with Slip Case and white shell

ABOVE: The UK Q8 in the green shell (Photo's from eBay auction)

In Japan, Dark Side of the Moon was pressed using the "RM", or "Regular Matrix" system. This was basically the Sansui QS system without the Sansui name. This is the most desirable, and consequently the most valuable, of the DSOTM quad LPs. It sells for well into the hundreds of dollars when it shows up on eBay, which is usually only once a year. The UK and German LPs, while collectable, are still fairly common. In the USA, there was no official release of the album in quad, although the following article was published in Billboard Magazine claiming that there were in fact "secret" quad issues in the racks with no quadraphonic labels or graphics. It is assumed that these would have been QS encoded, but to this day this has never been proven as true. 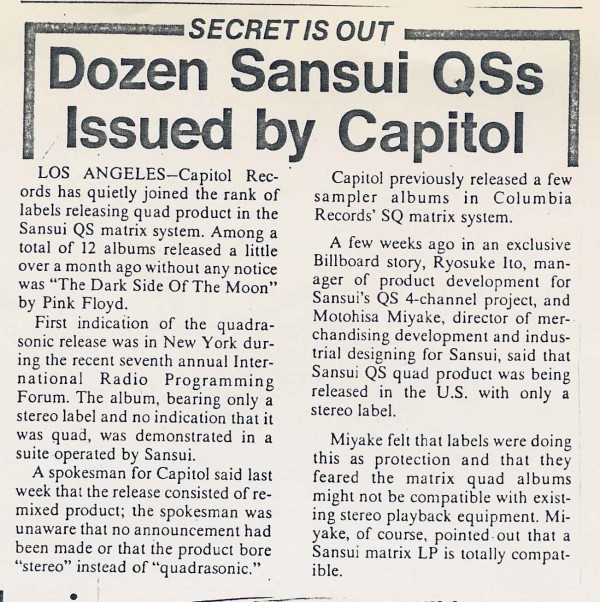 AROUND THE WORLD with DARK SIDE OF THE MOON

EMI produced and marketed the Quadraphonic LP in other countries such as Brazil, Australia, and Yugoslavia. In Australia, they released a special Pink Vinyl "Tour" Edition of the LP.Below are pictures of some of these pressings in photographs snagged off of eBay over the year(with a friendly "thank you" to the folks whose listings I grabbed thes from!) 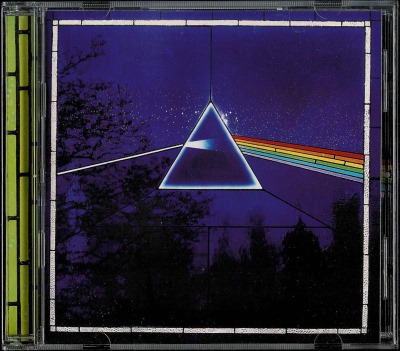 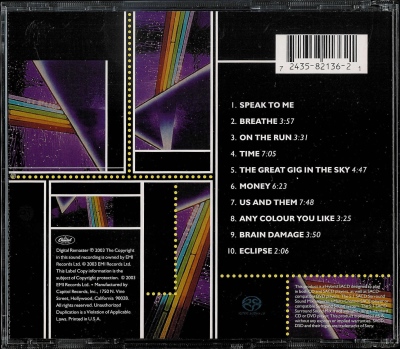 The SACD of Dark Side of the Moon does not contain Alan Parsons original quadraphonic mix.
It was the opinion of the group that the SACD be created from a new 5.1 mix, and commissioned their current engineer James Guthrie to create that mix.

The SACD was released with the below disclaimer printed on the
ower right corner of the back graphic. This was odd for an SACD release.

In 2011, Pink Floyd began their IMMERSION box set releases with Dark Side of the Moon as the inaguaral title. To the delight of surround
fans everywhere, not only was the James Guthrie SACD mix included on the Blu-Ray disc, but the original Quadraphonic mix
done by Alan Parsons in the '70s was included as well. This was the first time this mix had been officially released
in a discrete format since the UK EMI Q8. (A DVD-V disc was also inluded in the box with the same content) 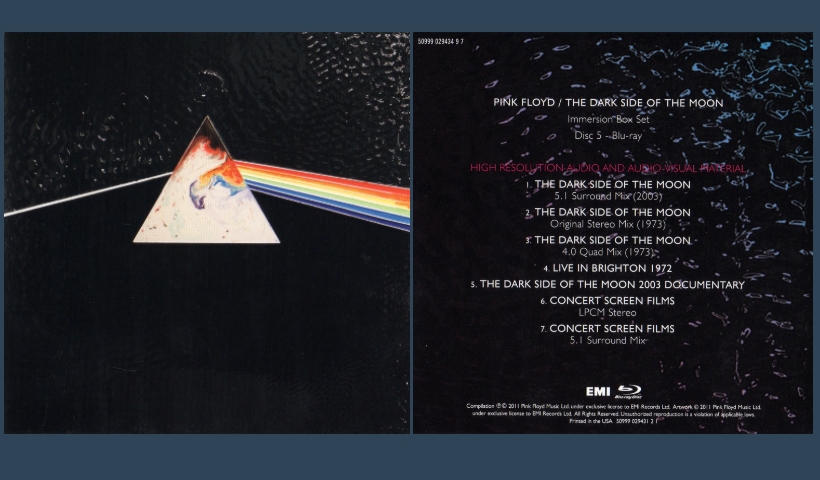 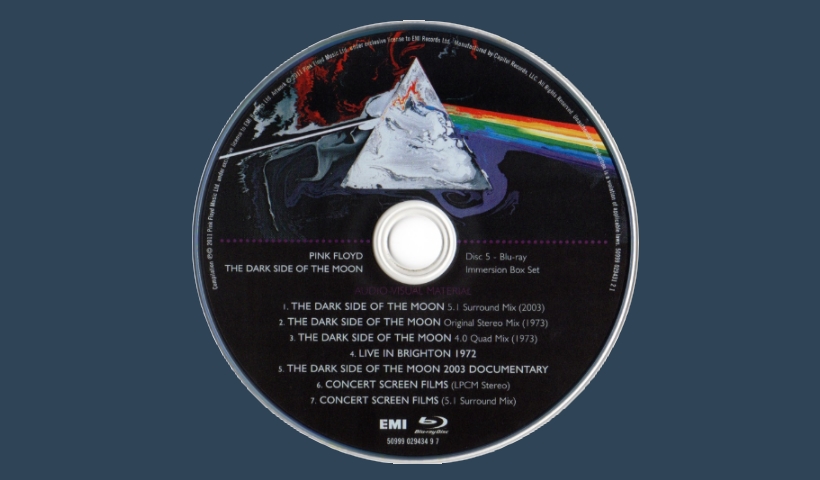 The Atom Heart Mother Q8's were released on both sides of the Atlantic in the same manner as the Dark Side of the Moon tape. Capitol's tape is a decoded SQ master while the UK tape is totally discrete. While not as popular as the UK DSOTM, the UK Atom Heart Mother usually sells in the hundred dollar range on eBay because of it's surround quality. The Capitol tape is fairly common and can be found for a reasonable price to this day.

The UK Q8 can be found in a white, green or black shell, with a clear plastic slipcase or a cardboard case. Several examples are show below in graphics pulled from eBay auctions

Just as was done with Dark Side of the Moon, this title was released in Japan encoded with the 'RM' matrix system,
and in the rest of the world (aside from the USA) using SQ. In the US, there was no quadraphonic LP release.

BELOW: The jacket of the Brazil issue of the album 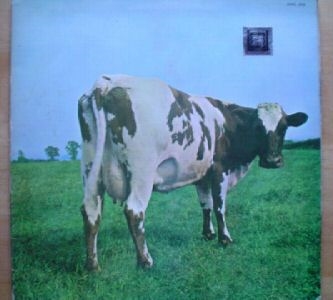 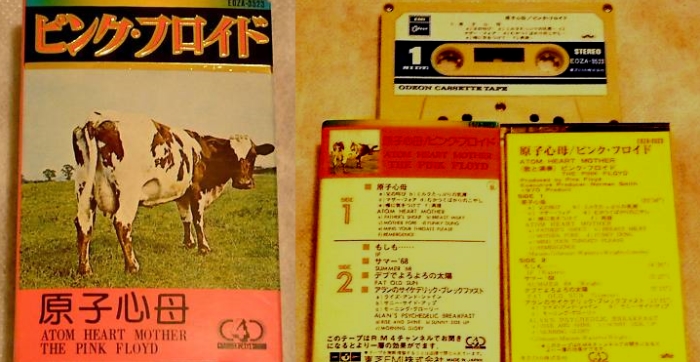 Released in the US on Columbia and in the rest of the world on CBS, Wish You Were Here was shipped with a colored shrink wrap
around the jacket. In most countries it was blue, in some it was black. There was a large blue QUADRAPHONIC sticker
on the Columbia LPs, but most of the EMI copies only had a small SQ logo within the edge printing on the round machine
sticker on the shrink wrap. Once unwrapped, the US issues are identified by a gold embossed stamping
of a standard stereo jacket proclaiming it's quadraphonic contents (see below).

The below label and jacket are from the Australian issue

Released only in the US, the Columbia Q8 of Wish You Were Here, although prone to excessive hiss, was the only way to hear the mix in a discrete format until the Immersion Box of the album was released. It is still highly sought after by collectors.

The second box set released in the Immersion series was Wish You Were Here. Again, surround sound fans were treated to not
only the original 1970's Quadraphonic Mix of the album as previously released on US Q8 and Worldwide SQ LP, but the box
contained the long rumored James Guthrie SACD 5.1 mix that was prepared but never released on SACD in the mid 00's.
Both mixes were now available to listen to in High Resolution Blu-Ray audio, as well as a seperate DVD-V disc for those
without Blu-Ray playback capability. 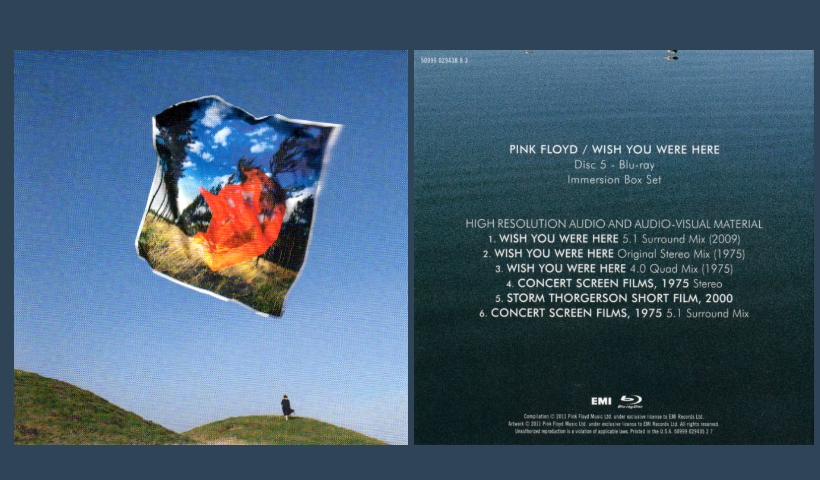 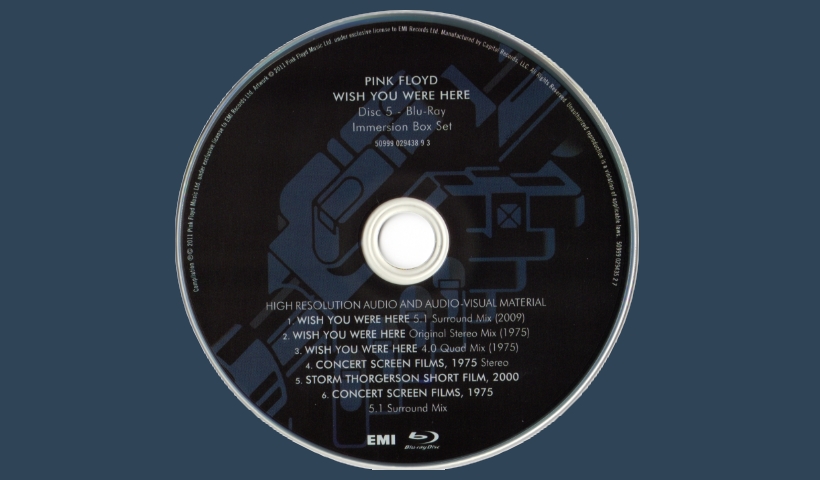 In an exclusive agreement with Analogue Productions and only available through their Acoustic Sounds website, EMI and Pink Floyd released
the long awaited SACD of the album with the 5.1 James Guthrie "Group Approved" surround mix. The disc was enclosed in a very elaborate package
with a hard cover book cover, and included post cards, lyric pages with photographs, and sold for $35.00. The SACD does NOT contain the
1970's quadraphonic mix of the album. 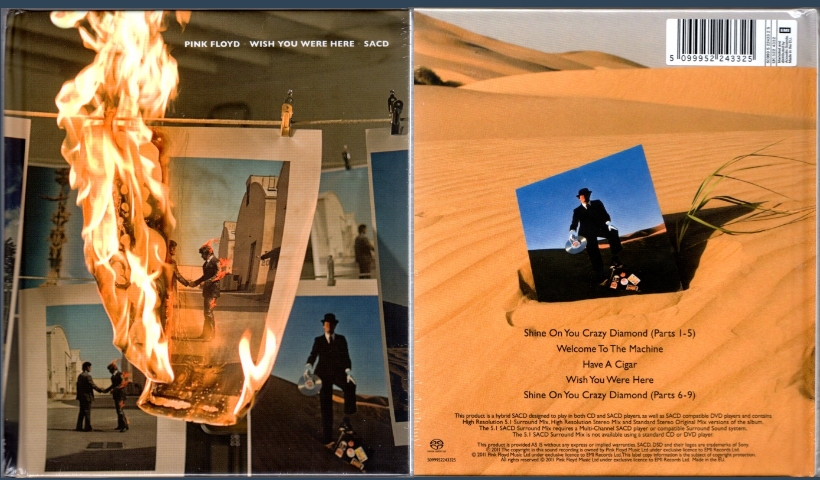 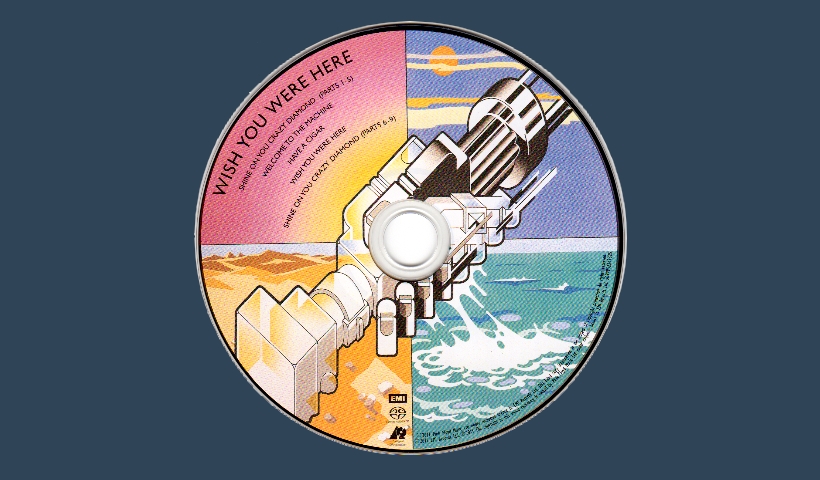 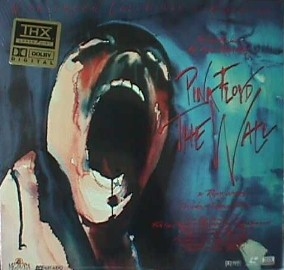 This is the very rare, late release Dolby Digital THX LaserDisc of "The Wall"


All copyrighted images remain the property of the copyright owner, and are used for informational purposed only. No ownership is implied.