barfle said:
There are a handful of CDs that are matrix encoded.
Click to expand...

Interesting, I don't remember ever hearing about this capability?
Although being a matrix'd system I don't imagine the sound quality was any better than we later got from the DTS CD's. They're not earth shattering but not too bad either.


The first time I saw the word quadraphonic associated with a CD was the album - Edgar Winter - They Only Come Out At Night, it isn't quad though.

My first CD player was a Radio Shack ( I know but it was all I could afford ) and funny thing is it is a belt drive. I had to replace the belt once. I still have it but don't use it since I have much better players now.

Sal1950 said:
Interesting, I don't remember ever hearing about this capability?
Although being a matrix'd system I don't imagine the sound quality was any better than we later got from the DTS CD's. They're not earth shattering but not too bad either.
Click to expand...

absolutely right, I prefer having the LP versions with their "imperfections" but full frequency range than truncated frequency music and more "stable"...

My first CD player had a pitch / speed slider. I guess if I was a DJ that would have come in handy. It was a techniques, possibly the SLP1 or 2... I really don't recall the model number! 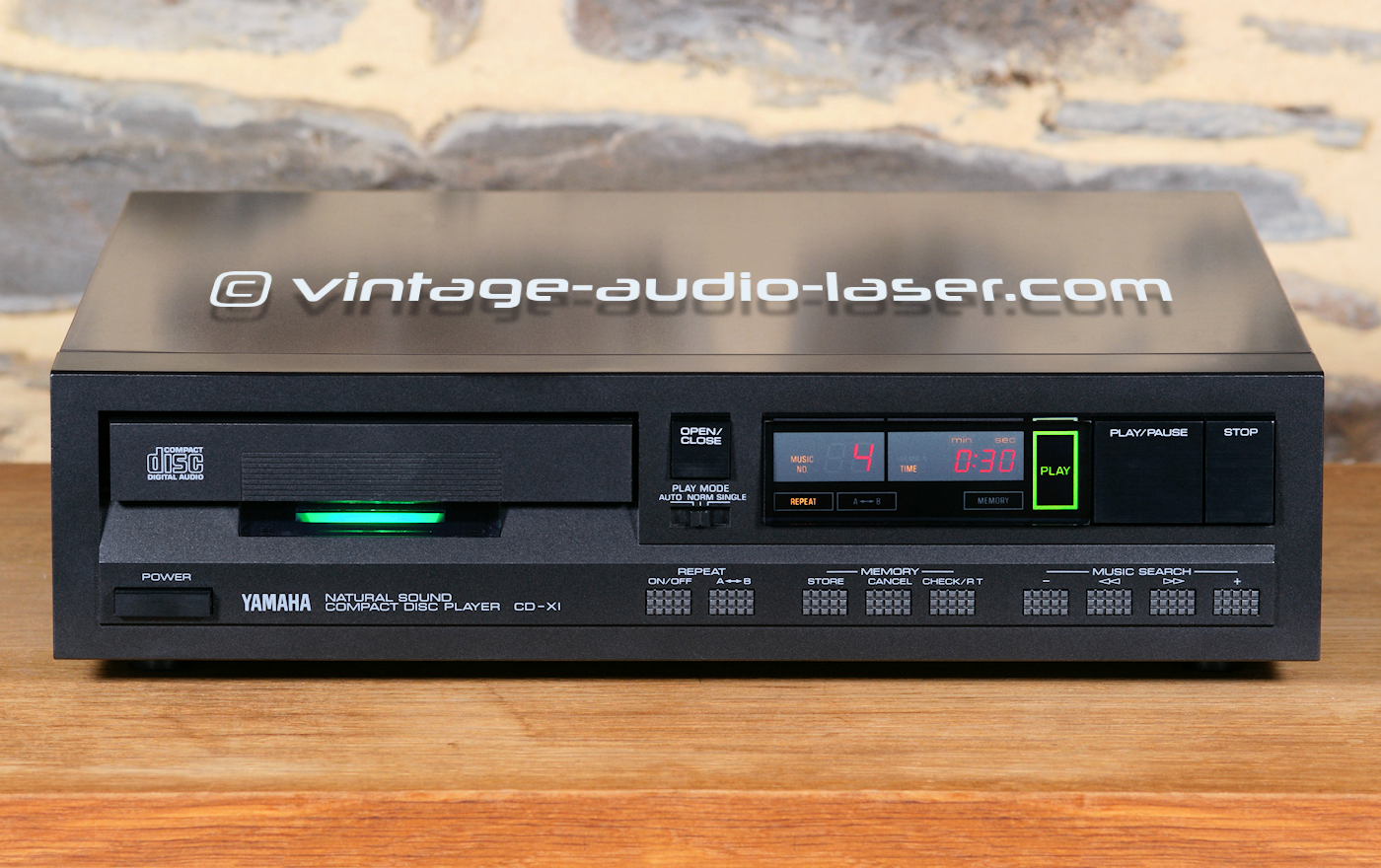 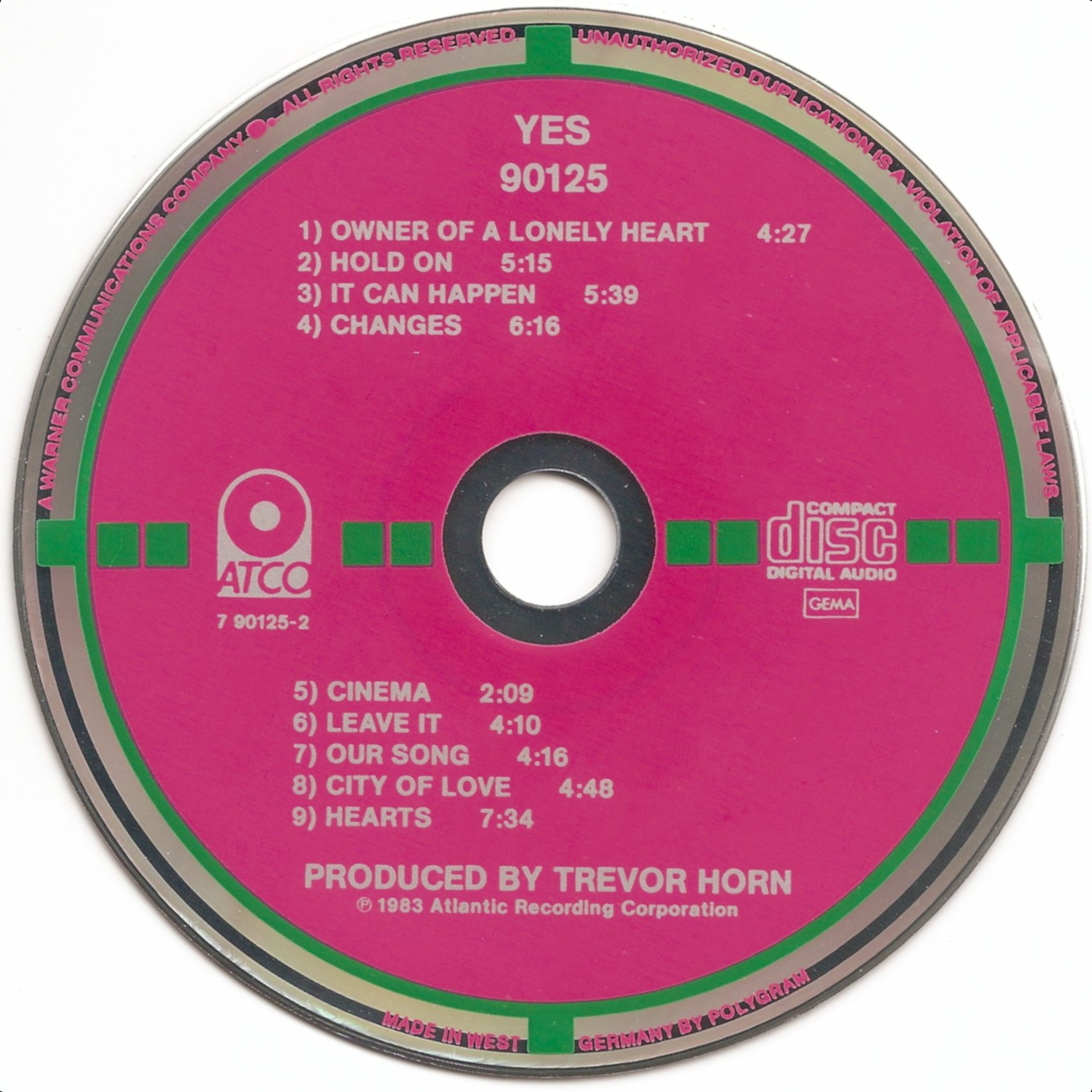 My most unusual CD player purchase was a Sony D-88 portable (I still don't know if it has 1 or 2 DACs), 5" CDs stick out of the player (I bought quite a few 3" CDs around this time too):

I remember the print articles about CDs in 1980. A story on CBS Sunday Morning in Oct 1982 showing the launch of the new format in Japan pretty much had me hooked. My first CD was a japanese import of Journey ‘Escape’ in March 1983. I traveled to the Sony Store in Detroit 2 weeks later to check out the CDP—101.
Purchased Billy Joel’s Nylon Curtain, MJ’s Off The Wall and Gustav Holst’s The Planets. My first CD Player was a Technics SLP-10 in July 1983. It still plays discs made between 1983 through 1987. forget non redbook 80 min discs, it doesn’t know what to do with them.

I bought a Sony D-5 in Oct 1984 and the battery case for it. With the D-5 attached, it’s the size of a portable cassette player from the 1970’s. I also bought the D-5 12v car adapter. What a game changer for car audio. Plugged it into the aftermarket car stereo aux RCA inputs. Kept the D-5 on a small pillow to mitigate skipping when crossing railroad tracks at warp 5. Those were the days…..


The first time I saw the word quadraphonic associated with a CD was the album - Edgar Winter - They Only Come Out At Night, it isn't quad though.

I’ve got the Q8 of that album. Frankenstein sounded great in the car.

I wish my CD players had the longevity of my turntables. Luckily I've ripped most of my discs, so when the CD players all die, I can still play the music.

CD's are convenient though.

A self installed Craig (low end) stereo cassette AM/FM radio which I wired to mono for the single speaker in the dashboard.

It was too cumbersome to use all this stuff and I was worried about damaging my CDs, I switched to making cassette copies until I got a new car w/built in CD player (I make CD-Rs of my albums which I keep in my car).

Thank you! That is the player! I now recall it came with at least three discs, The Jacksons was one, I don't recall the others. Even worse, is I have no recollection of what my first CD purchase was! Then again, I probably bought a few to get started.

I think my first CD player was an Emerson boombox that I bought at Service Merchandise in the burbs of Chicago. I knew a cd player was going to cost me a small fortune. So before I bought it, I bought about 8 CD's which most, if not all, I still have. That was shortly after Cd's first came out and our local record store, Flip-Side, had a very small section with a very limited selection. A few of them I bought were ChangesOneBowie, UFO Lights Out and The Yes Album. I don't remember the other titles. I'm sure if snooped through my collection I could find them. If I'm not mistaken, the cd's were about $25 each.

To those mentioning the Technics CD players, I don't remember the model but the Technics cd player was the first component CD player I owned. I miss it very much. I enjoyed features it had that I still don't see on CD players now. To name a few, the cue feature and peak search were great when it came to recording cd's to tape. I also loved the index feature.

My stereo buddy and I were licking our chops, and lusting like hungry wolves for CDs. The first ones were more than records, as I recall, usually about the price of like, a double LP album , from something like 12.95 to 19.95 which was often more than I wanted to pay. The players at first were even worse. Nobody we knew had one because they were very expensive. But we were primed because the Soundstream mastering system had been around and the St. Louis Symphony used it.

Eventually, we went to Venture, (gone and forgotten) and my pal bought a cheapie, maybe an Emerson. It was $189.95. But the check out girl only put 89.95 on his credit card. We considered that auspicious. The prices for even good ones plunged, and when he got a better one I got the Emerson, which in spite of its cheapo reputation name, sounded fine to me. Later I inherited from the same friend, an Akai which I used for many years till it got goofy.
I didn't even try to repair it, but just pitched it. When it got goofy I had on hand a Mission Audio , early player that I got at my local electronic surplus place. I remembered it was an "audiophile" brand and snagged it. It has the swing arm disc reader and the well known first batch of A/D converters which some audiophiles think sound better. I don't hear any difference, but I am probably a philistine. It plays the discs. I also have not been above using DVD players with analog outs to play CDs. Even though audiophiles shrink from that , the digital circuitry is fast enough for video so its about 400 times faster than audio. No problem.

I probably had about 100 cds of my favorite music on hand for ages and a lot more LPs (maybe close to 1000). I had gotten away from the hobby. But about four years ago it flared up again and I discovered that discs have become cheep and I probably have about a 1000 of them now. Mostly bought for an average price of about $1.45. It doesn't matter if a two CD set was an expensive DGG or Telarc. At Half Price books or Vintage stock when it gets into the clearance bin they are $1.80 and 0.99 respectively.

It is my opinion that cds will make the same kind of comeback that LPs have made. They are infinitely easier to play. I don't dislike LPs nor even their sound limitations. I would love to have needle drops of the many quad LPs that are out there. I have two record players (mine and my late friends' both of which are superb) but have not bought a record since the 1980s. I can't imagine buying one either though it could happen. (Likely either a Beatles LP or a Quad disc , that would cross my bow) I have looked at the records on sale at Half Price books and V stock and haven't seen anything that causes excitement/wallet-rection. I admire the folks that are cranking up CD-4 systems and even Matrix LPs but I don't see myself doing those things. Maybe matrix since I do expect to have a Surround Master.

When I returned to the hobby and read about SACDs and DVD-As and Hi Rez and especially Multi Channel Hi Rez I had the same excitement we had when CDs first appeared. I sorely wished my old pal was around to navigate through all of this together. He would have been just the guy to build a matching center channel.

I can see why people want to stream and also why they may prefer to put their discs (or downloads ) onto a NAS.
Last edited: Aug 22, 2022
R

Still own my Philips 101 player circa 1984, had it refurbished but the laser is degrading. Plays like a champ and weights like on too(heavy weight class)
I thnk my first Cd was Herb Alpert

My 1st CD, ©1983 which came with the Magnavox (Philips) FD 1010 top-loader swing arm dual D-A converters player I bought on sale at Bloomingdales in '84 for $299. Sold the player to buy a front-loader Magnavox which was troublesome. Sent it to a Magnavox service center in Atlanta and it got damaged on the return trip. NAP sent me a check to pay for it. I proceeded to buy a Denon DCD-1500 II which served me well, over 15 years. 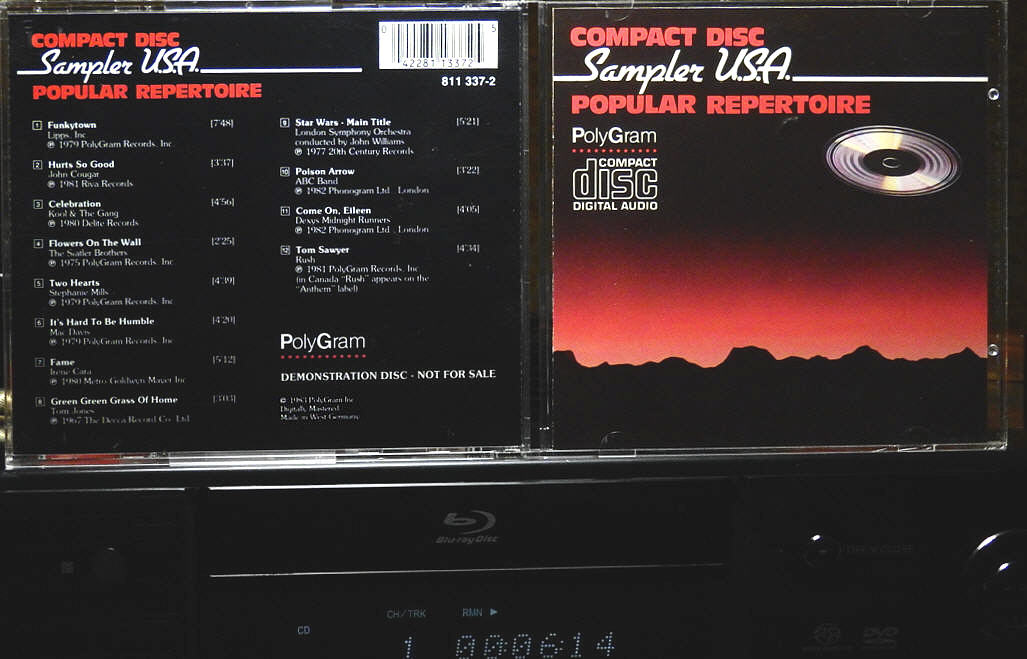