DuncanS said:
I have quite bad astigmatism (I own all his albums!) so I'm not 100% sure 3D would work well for me, and I also have to confess I don't watch many films/movies anyway, I take the lead from the Doobies............ I just listen to the music
Click to expand...

Duncan, I do empathize with those who do have poor vision or become nauseous when viewing 3D [the latter affects approximately 10% of the population] and I, likewise, have astigmatism but with surgery a few years ago to replace a lens in my right eye, I do have 20/40 distance vision and do have to wear corrective glasses under my 3D goggles but IMO, it's WORTH IT.

Only when I purchased my LG Curved 3D TV back in 2016 did ALL those 3D movies I 'invested in' over the years suddenly came into FULL FOCUS with rapturous video quality, brightness and depth synonymous with the format. My previous Panasonic Plasma TV ONLY HINTED as to what was really on those 3D discs.

And if I can EVER get my new system set up [due to Covid 19 everything's ON HOLD], I did invest in a new state of the art SONY 3D Laser Projector [NO more replacement bulbs after 2000 hours of use] and a new 120" Stewart filmscreen [imported from the UK].

The only rub: 3D BD~Vs in mid 2020 are only being released in the UK and only a scant few are trickling out of the studios. And since 4K movies [which themselves are likewise being sparsely released] eliminated 3D, the format is presently on shall we say LIFE SUPPORT. And of course, the major hardware manufacturers have also ceased manufacturing 3D flatscreens.

Sounds suspiciously like the early days of SACD/DVD~A when no one really took those formats seriously and everyone said: WHO NEEDS SURROUND?????

jefe1 said:
You know there is 3D then there is 3D.... I got a hold of the last star wars movie Rise because the 3D was described as superlative. I found myself disapointed in that version wheras there are some films where the depth of field is stunning regardless of whether there are any pop out moments.
Some of the old 50s fims have great 3D but you are also looking at film grain and images that are just not as sharp as modern films.
I bought a copy of Taza Son of Cochise a 50s film. It is lame my son regarded it a punishment to watch but the 3D was done well...except for a constant tree branch always appearing in the foreground to emphasis the depth.

For modern 3D films I dont think you can beat the ones from Marvel.
Click to expand...

Two words: Dr. Strange! In 3D it's amazing. The first sequence where the skeptical doctor is taken into the other dimension -- WOW!!!
J

Thumbs up I completely concur about Dr Strange! Looking forward to a second Dr Strange movie and hope its done in 3D.
W

For me, what is extra icing on the cake for the Marvel 3-D titles is they are the only consumer release versions so far to show certain scenes in the wider IMAX version, as they were originally shown in IMAX 3-D theaters. (4K and standard 2D bluray versions are all locked in at 2.35) Dr. Strange benefits nicely from the variable aspect ratio changes. I think the two Guardians of the Galaxy features utilize this the best and also have great 3-D presentations. 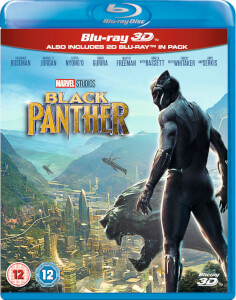