So I was poking around on Google looking for quad info that was entirely unrelated, and I found this little blurb in the May 20, 1972 issue of Billboard: 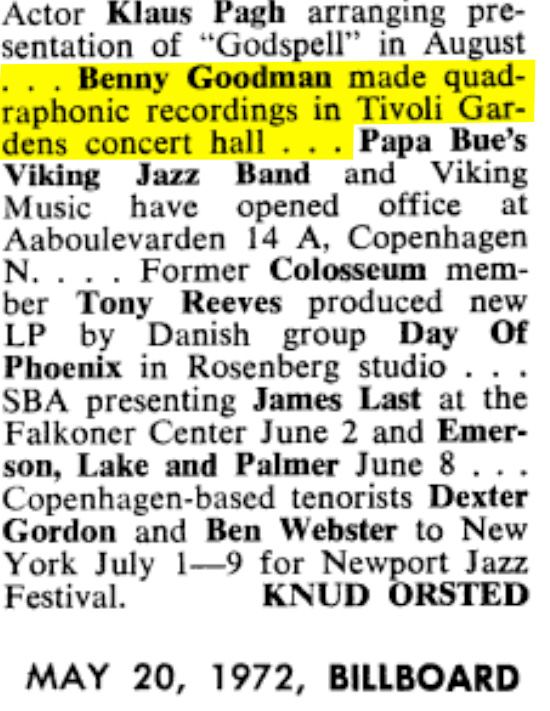 So I did a little digging around Discogs, and these recordings were released as a double LP called On Stage With Benny Goodman & His Sextet Recorded "Live" In Copenhagen, albeit only in stereo:

View credits, reviews, tracks and shop for the 1972 Vinyl release of On Stage With Benny Goodman & His Sextet Recorded "Live" In Copenhagen on Discogs.

I noticed that the album was part of London's "Phase 4 Stereo" series, which is often mistaken for being quad, so I did a bit of googling on the producer and engineer of the album (Ray Few and Arthur Bannister) to see if they were "quad guys," and the evidence suggests that they definitely were - the duo worked on several Decca albums that came out in quad (Q8 and QR only) in the US on the London label, including Ted Heath Orchestra A Salute to Glenn Miller and The Big Ones, many of the Ronnie Aldrich ones including Soft and Wicked, Close to You, and Come to Where the Love Is , Stanley Black Film Spectacular Volume 4: The Epic, and quads by Mantovani, Edumndo Ros, and more.

View credits, reviews, tracks and shop for the 1972 Vinyl release of Stan Kenton Today: Recorded Live In London on Discogs.

This is the relevant passage from the book, with the quad mentions bolded:

"Having rejected the Hammersmith Odeon as the recording venue because of its notoriously poor acoustics, Decca's engineers now found the Croydon Hall no better. After the first house the play-back tapes sounded way off, partly due to poor initial mixing (16-track quadraphonic was being used), but also because Von Ohlen's drums swamped the orchestra. For the second concert a high baffle wall was built around John, in an effort to contain his sound.
By now "recording nerves" were prevalent, and while Kenton retained his affability, the guys knew he was in reality willing them to succeed. Particularly on newer pieces like "Ambivalence," mistakes were made, causing Stan to stop the band and start again. In addition, some of the featured soloists out front had played away from the recording mike, like Fred Carter's largely inaudible trombone on "23oN-82oW." Thanks to the good offices of Ken Hanna, Pete Venudor and myself were invited to attend the Decca studios next day to hear the first run-through of the tapes, and in those ideal conditions in quadraphonic sound, the band sounded well."

(The full two pages if you want to read them.)

While this discovery isn't earth-shattering or anything, it does make you wonder if labels like Decca were pursuing a policy of mixing everything in quad in these early days of the format, as a kind of "better safe than sorry" type of thing before they knew what the demand would be like or how many albums they'd release in quad, or if they'd maybe even release albums as single inventory quad, like EMI did with many of its classical releases. It also makes you wonder how many Decca albums from the early '70s that were released in stereo only have an unreleased quad counterpart sitting in a vault somewhere.