THE QUEEN OF SOUL GOES QUADRAPHONIC

LOS ANGELES – For its second Quadio release, Rhino Handmade gives “Respect” to one of the greatest singers of all time with a reissue of The Best Of Aretha Franklin, a collection of stone-classic soul music that was released in 1973 exclusively in Quadraphonic. Out-of-print for decades, this music-only DVD features unique quad mixes by legendary producer Tom Dowd that have not been available since the original release.

THE BEST OF ARETHA FRANKLIN (QUADRAPHONIC MIX) is available for pre-order now exclusively at www.rhino.com for a suggested list price of $29.98 and will be released August 17. Featuring four channels of 24-bit, 96 kHz audio (down-scalable to 24-bit, 48 kHz), this DTS DVD is to be played in a DVD player with Surround Sound in order to enjoy the Quadraphonic mix as intended. The release does not include a two-channel stereo mix.

THE BEST OF ARETHA FRANKLIN (QUADRAPHONIC MIX) contains 12 tracks, including an extended version of “Rock Steady” with music by the Memphis Horns that was cut from the stereo version and can only be heard in this Quadraphonic mix. The disc also includes a rare version of “Chain Of Fools” with an extended introduction. This version was released in stereo in 1995 as part of Rhino’s expanded edition of Lady Soul.

These songs spotlight Franklin during her white-hot run with Atlantic Records and capture the singer at the pinnacle of her hitmaking prowess. The collection opens with “Respect,” a song that topped both the Pop and R&B charts in 1967 and went on to become the singer’s signature hit. The disc gathers many of the Queen of Soul’s crown jewels and accounts for no less than eight #1 R&B hits, including “Baby, I Love You,” “Spanish Harlem,” “Don’t Play That Song, “Call Me,” and a cover of the Simon and Garfunkel ballad “Bridge Over Troubled Water.”

One of the earliest offerings of what would later be known as Surround Sound, Quadraphonic sound uses four channels and speakers placed in four corners of a room to create signals that are independent of one another. To learn more, visit Rhino Handmade’s primer on Quadraphonic sound at www.rhino.com/global/what-quad. 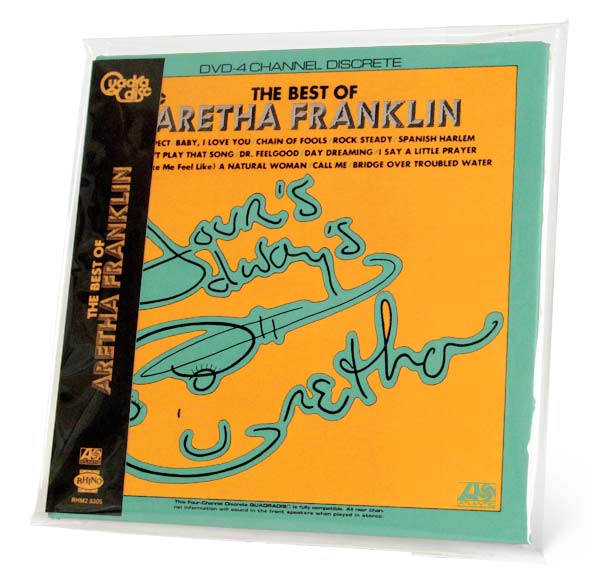 I am a big fan of Aretha Franklin and I thought about her when the unnamed upcoming release was discussed and we were trying to guess but I just immediately dismissed it thinking there was no way. It is a good thing I don't wager on picking upcoming Rhino Handmade quad releases.

I'm thrilled to get to hear this -- I just hope the pace picks up. First in March, was it? Second in August. Would love to see a blow-out title for the holiday shoppers....

Not sure what release velocity is possible but if we saw 4-6 releases every year I'm sure we would be thrilled and the marketplace would support that. For those of us who have been involved with these formats since back in the day, it is very exciting.

Also great fun to turn people on to discs like CTA and watch their expressions as it begins to play! Thanks

Looking forward to it... even though I already have a copy of the original reel wavs.... it can only get better from here! Count me in.
C

Oh. This is gonna be fun!
S

I'm in too. I loved CTA and cant wait to get this one. THANKS!

This is a great chess move by Rhino to gather interest in the rediscovery of these great Quadraphonic mixes. There are many great funk and soul hits that were released in Quad. This release will absolutely get much press and raise awareness of Quadraphonic with the public. You can’t go wrong with these classic #1 chart topping recordings. What will blow people away is the openness of the mix and that you can hear all the instruments and great musicianship discretely. Keep the titles coming!

Good thoughts, Jim. I think the Aretha Hits will generate quite a bit of press, which in turn will get more people to notice the Quadio program. The next release can gain by the awareness of the program that the Aretha release will garner.

Found it disappointing. The differences between the Front and Back are not significant for most of the titles.

wavelength said:
I was listening to the audio samples.
http://www.rhino.com/shop/product/aretha-franklin-the-best-of-aretha-franklin-quadraphonic-mix-handmade

Found it disappointing. The differences between the Front and Back are not significant for most of the titles.
Click to expand...

Are you listening to the right clips? This is a very discrete recording, granted it's from an 8-track source and there's lots of "studio echo" it sounds great. Yeah, it's not as discrete as CTA, but it's still very well done. Tom Dowd was a genius when it came to some of his recording/mixing techniques.

Listen to the 'Rock Steady' clips.

Remember that the Columbia Quads, especially the Q8 tapes, we SUPER discrete, isolated mixes in the back, blow you away quad. Most of the WEA mixes were more like todays SACD/DVD-A mixes. Nicely balanced, but still discrete.

It's hard to compare a quad title like CTA with a WEA quad.

It's a great title. After listening to these songs on the AM radio or in stereo, it's quite a kick to hear these familiar songs in Quadraphonic.
M

JonUrban said:
Remember that the Columbia Quads, especially the Q8 tapes, we SUPER discrete, isolated mixes in the back, blow you away quad. Most of the WEA mixes were more like todays SACD/DVD-A mixes. Nicely balanced, but still discrete.

Very good point. We're dealing with audio decisions made on the fly by people nearly 40 years ago when it was a fledgling format.

Looks similar to the quad reel.

I am super jazzed about this and have already preordered. I've heard some very nice transfers of the commercial tape release, but having an official release direct from the Quad master will be a major step up just in terms of getting to a higher generation dub.

I saw, in John's "clue" thread on the main board, a couple folks bemoaning that this release isn't one of the more obscure or unreleased bits, but as a marketing professional I understand that Rhino must start off with what will likely be hot sellers by established, notable artists in order to build client base, word of mouth, and internal support from label execs who could easily pull the plug if the showing's lackluster this early in the game. I hope folks will take the long view and be supportive of these early releases so that we can perhaps get the obscurities once the program has plenty of support from all corners.
You must log in or register to reply here.
Share:
Facebook Twitter Reddit Pinterest Tumblr WhatsApp Email Link