Here's an interesting one. The latest album by Band of Horses is "Acoustic at the Ryman", a live recording from last year at the Ryman Auditorium in Nashville.
It turns out that the concerts were recorded in Stereo Direct Stream Digital (DSD) using the Mytek DSD converter.

The album is available on the Super HiRez downloads site run by Acoustic Sounds along with several other formats. As a bonus, the Stereo DSD Download version of this album has 4 bonus tracks - 3 of which do not appear on the other versions of the album (Vinyl LP, CD, iTunes and MP3). It will be interesting to see if offers like this are made available with future DSD Download titles.

I will say that the Stereo DSD Download of the album does show off the performances of the band and the DSD format very well. And the DSD Download of this album is moving up the Super HiRez "Top 20" sales charts (now at # 6) as a result. Worth listening to the sound clips, and a purchase if you like this type of acoustic music. 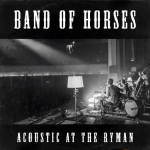