For a 1959 recording, I presume it was recorded on 3-track at most. How much could they do to make this quad?

It's not improbable that this could have been recorded on a 4-track machine, but I can't find any mention of a portable 4-track machine in 1959. The separation is incredible though. The only thing I can think is they took the two instrument tracks, and passed them through some sort of hafler circuit and layered those overtop of Harry's vocals in the front while sending the unprocessed band tracks to back left and back right.

Gosh! It does exist on QR too!
Since it's a Reel Society, it should had been released very very late (1978) since the layout is similar to Tomita Kosmos.

It also exists in its' entirety as a 2LP Japan CD-4. 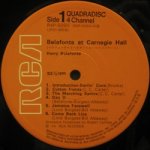 Great! Probably cost a fortune to track down. Amazing someone hasn't converted it, many Japan quad's have been....

As for the recording: probably 3-track. I have the Q8 (unfortunately, not here to play back to be sure) but as I remember it's similar to Cliburn's Tchaikovsky album, with the main stereophonic sound in front and a lot of ambiance in the rears (some would think it 'double stereo' but it isn't, the idea was to put the listener in the middle of the concert hall). The Belafonte mix was, IIRC, L/C/R in style for the fronts, with some 'backwash' and ambiance and audience in the rears (been a long time since I've heard it, but even abridged, a nice listen).

QuadLinda,
the japanese cd4 is the same abridged version as the Q8. You said that...

I'm afraid so...which is too bad. So I'll repeat my post from that thread:

This one is a classic example of record company stupidity. Despite the fact that this album easily sold over a million copies since its 1959 release, and despite the fact that many consider it a great, even iconic, Lp, someone later on decided to first hack it down to one Lp/tape for quad release (can you imagine the reaction if someone had tried to do that with Miles?!), but then, in the digital age, put the album on one CD instead of giving it the treatment almost every other 2-Lp reissue on CD got--the complete album? Simply ridiculous. Not only that, but BELAFONTE AT CARNEGIE HALL, like Harry's CALYPSO, are key commercial and prestige markers in the history of RCA. But then, it may be proof that, by the early '70s, the bean counters were taking over record companies and didn't care nor appreciate the artist or his music.

In reading my comments, I did say "If it's a single LP..." It obviously exists as a 2 LP Quadradisc, subtitled "Complete Concert."

Sorry for any confusion.


winopener said:
QuadLinda,
the japanese cd4 is the same abridged version as the Q8. You said that...

Quad Linda said:
In reading my comments, I did say "If it's a single LP..." It obviously exists as a 2 LP Quadradisc, subtitled "Complete Concert."
Click to expand...

To me, it's just a abridged release, period. Would make no sense at all to have two releases, one on 2lp and one abridged, in quad. At least it would had made the 2xQ8 version in USA. The only exception to this rule was the Bernstein Mass, complete or highlights.
Also, the song sequence and listing are the same as the USA Q8: if it was a complete concert the song sequence would follow the original 2lp order.
Of course i will love to be proved wrong, but i doubt it. Probably it hasn't been mixed totally into quad, just the needed tracks for the abridged version.
You must log in or register to reply here.
Share:
Facebook Twitter Reddit Pinterest Tumblr WhatsApp Email Link