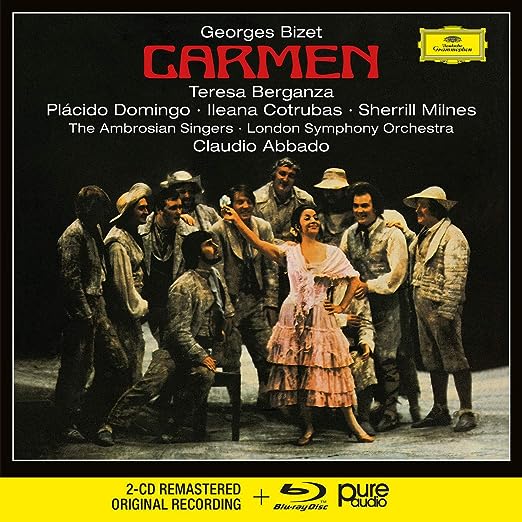 Although no information has appeared yet from the label themselves, Presto Classical has this information attached to their listing:

Abbado’s years with the London Symphony Orchestra resulted in three celebrated sets with the Spanish mezzo Teresa Berganza in central roles – and few could be more “central” than Bizet’s Carmen. Made in 1977, the recording followed staged performances directed by Piero Fagioni at the Edinburgh Festival. Berganza had studied the Carmen story, immersed herself in the opera’s background and delivered a characterization that emphasized the gipsy’s nobility, while Abbado’s conducting was both dramatic and vividly coloured.
Click to expand...

Opus Arte have at least one modern opera Blu-ray that offers Atmos, while DG have a few classic operas in 4.0 / 5.1 on Blu-ray Audio (including the 1973 Bernstein recording of this opera) and one or two Dolby Atmos remixes, but I believe this will be the first opera from the analogue era to be presented in a Dolby Atmos mix, and it seems that high-resolution options in both 5.1 and stereo will also be included, seemingly in 192kHz, 24-bit.

The price is really good, too. Just $17.00 on sale above at Presto, and currently under €22 VAT included on Amazon in Germany and Italy. It's not active on the other Amazon sites yet, but hopefully, the price will be comparable.

Although I would love to have a copy of this and may buy it, I don't see the point of digitizing analog magnetic tape at 24/192.

gene_stl said:
Although I would love to have a copy of this and may buy it, I don't see the point of digitizing analog magnetic tape at 24/192.
Click to expand...

It's better than MP3.

My favorite soprano of all times. Oftentimes my favorite tenor.