Blood Sweat and Tears (Second Album) and it's 3 quad mixes

Today I've been sort of wiped out from home renovations and decided to play around on the PC for a while. I never know what's going to get my attention when I open up Sound Forge, but for some reason I decided to "look into" some BS&T. I found that I had my AF SACD rip (which is basically the official Q8 mix sounding better than ever possible on Q8), but I also had files from the two Robin Reels. So I got them all queue'd up and decided to see what the differences might be. In the past it's been talked about but I could not find an older thread looking at the differences so I figured I'd start one up for posterities sake so that future QQ'ers might have a reference.

So here is the first track I decided to pluck out. It's track 6, "God Bless the Child", the old Billie Holiday classic from 1939. There are very stark differences in all three mixes that you can see (and hear), but alas I can only post the visuals. So here goes:

THE OFFICIAL COLUMBIA MIX (Q8/AF SACD): Intro horns in all 4 channels. Vocals in the fronts and at a lower volume in the rears. 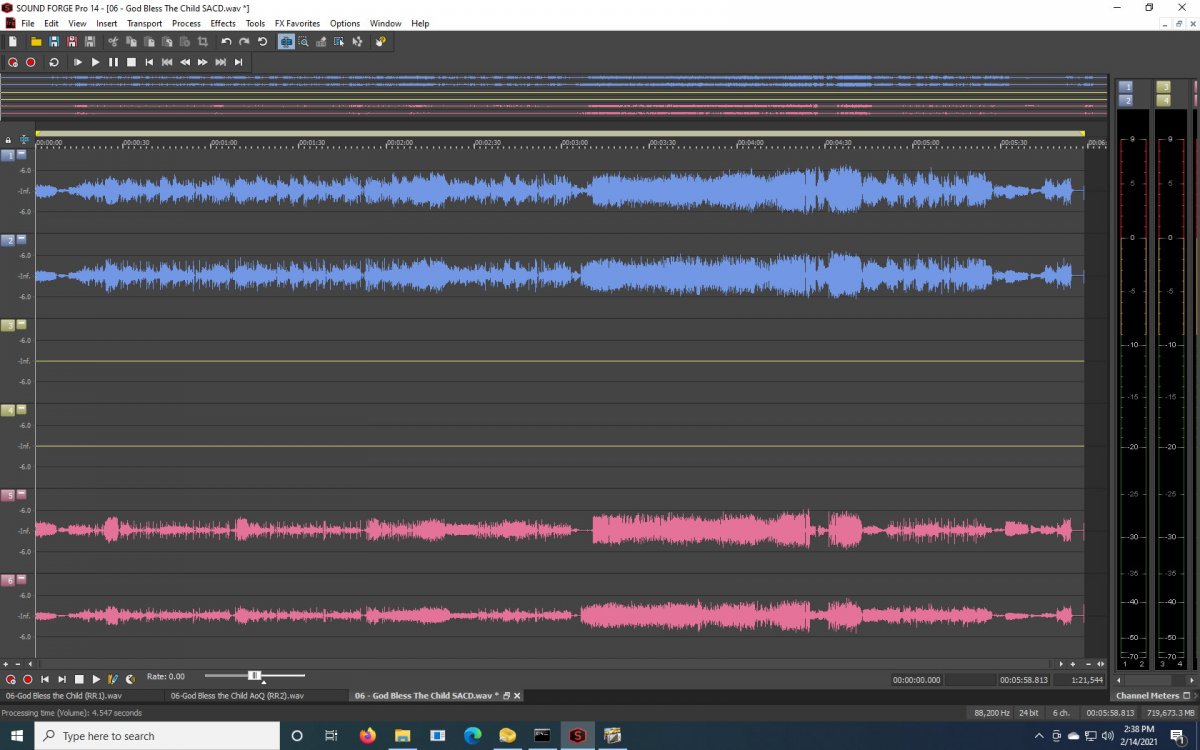 THE ROBIN REEL #1: Intro horns in the rears, mostly skewed toward the left rear. Drums and bass solo in the fronts along with lead vocals. Lead vocals again at a lower level in the rears. This is a VERY discrete mix compared to the commercial release. 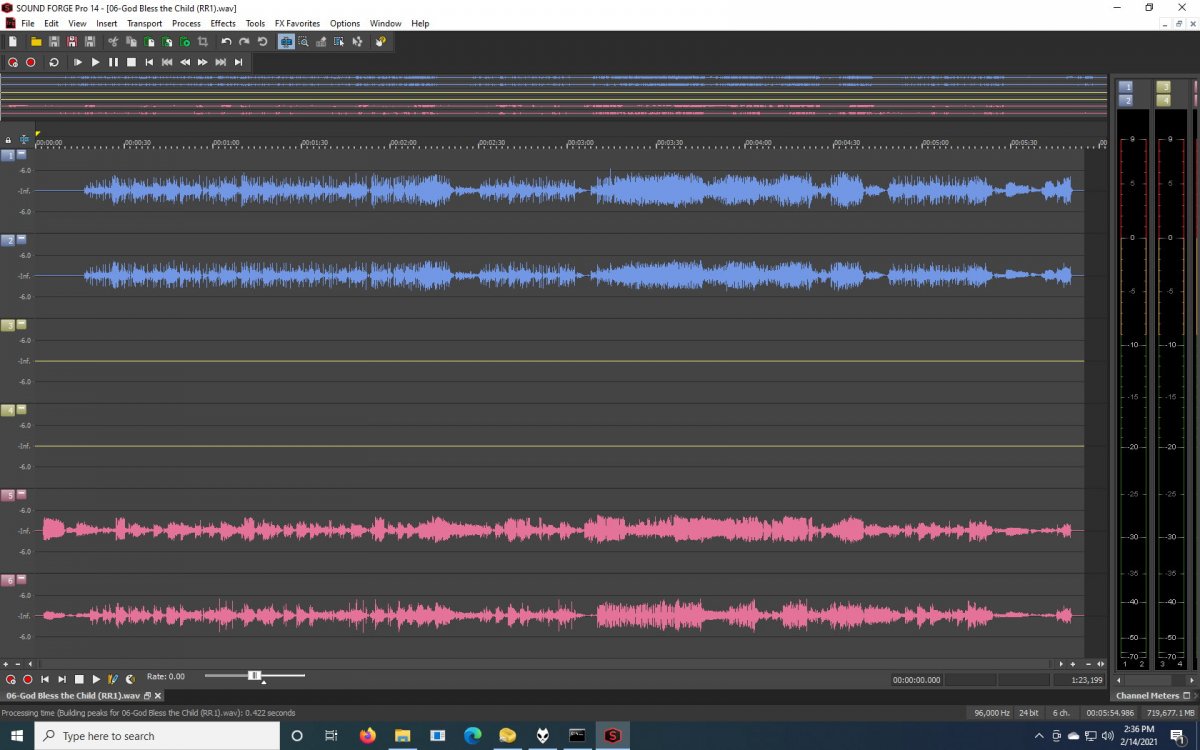 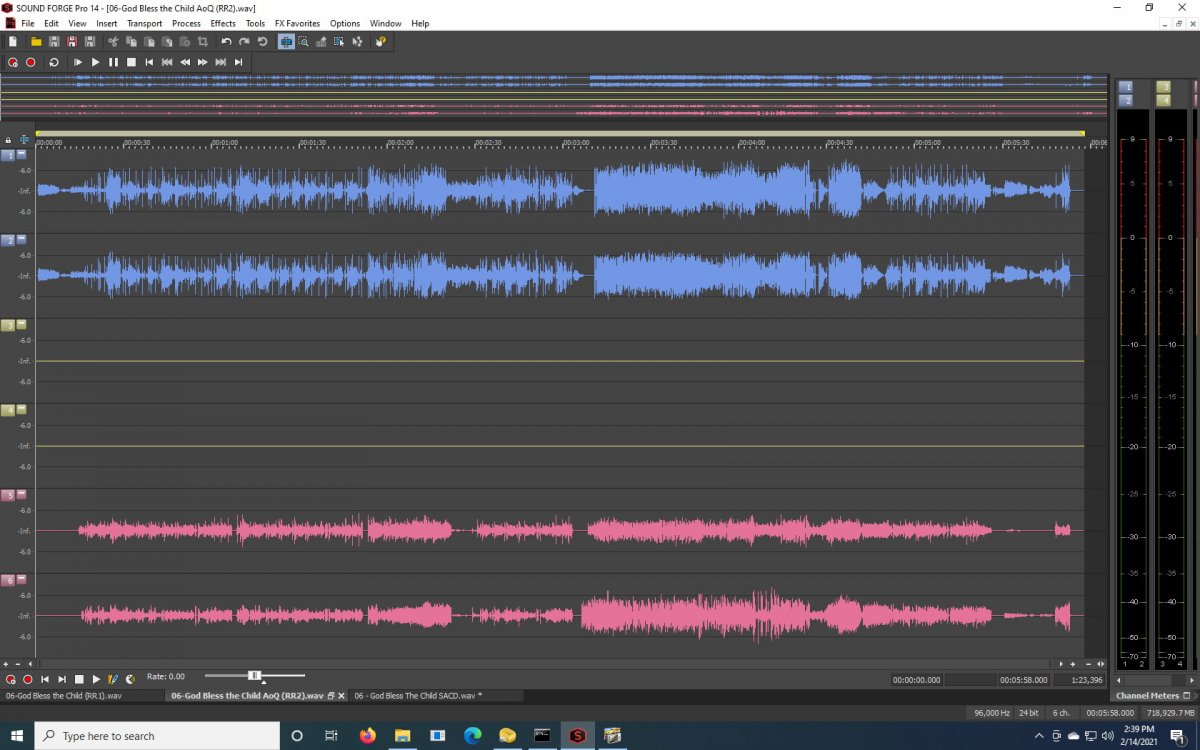 Three really different mixes. As I putter about I will do the same for some of the other songs if you guys are interested.

Also, I would love to hear from AoQ who spent a lot of time with these mixes as to what he thinks of them and which he prefers. Or anyone else for that matter. I know these things are "out there" in the wild.

So, now "Spinning Wheel". Many complaints in the poll thread for the SACD in that the longer version of this song was not used for the Columbia GH album, which meant that AF received the master tape for the released version that did not have the longer ending.

Well, the Robin Reel 2 has that ending, and you can see it, and hear it, below. First up, the released version wav file:

THE OFFICIAL COLUMBIA MIX (Q8/AF SACD): Again, the horns at the intro come at you from all 4 speakers. Maybe this is something that they wanted to do that would sound better with the shitty SQ encoding that they used. Who knows? Vocals again can be heard in the rears at a lower volume. 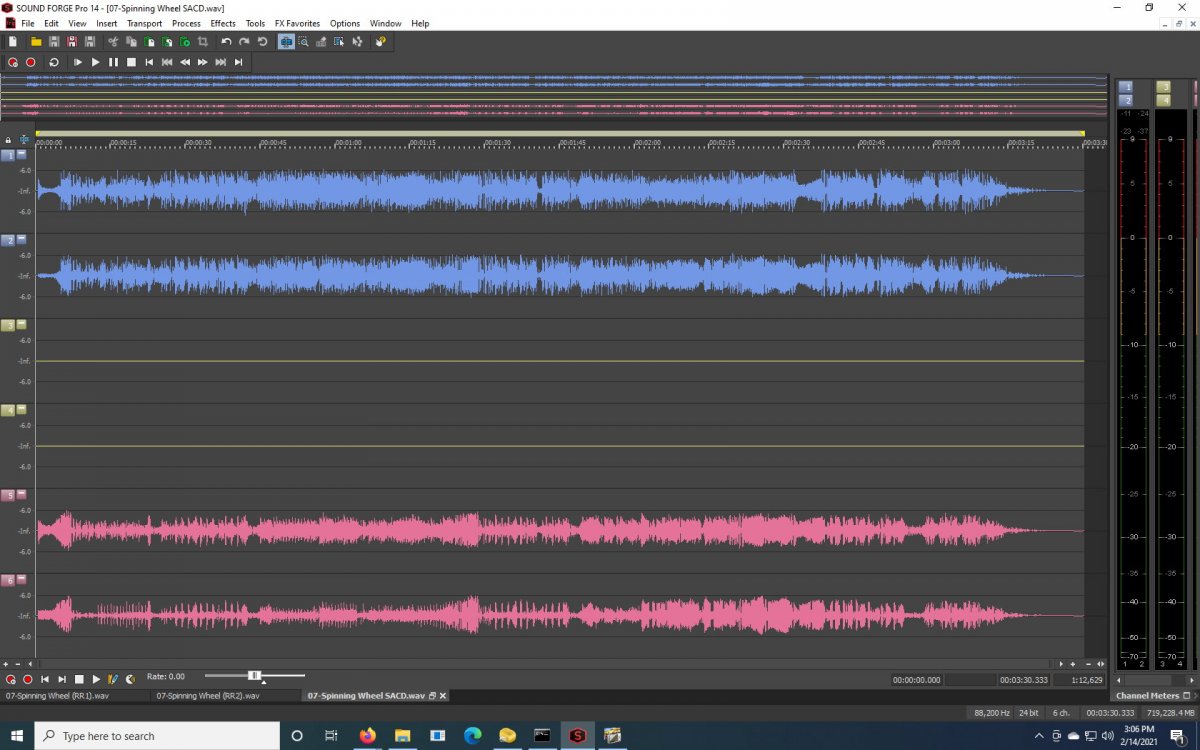 THE ROBIN REEL #1: Horn intro in the rears here. Vocals in the rears as well, and in fact early in the song, the only thing in the rear right is the lower volumed vocal. Very strange! 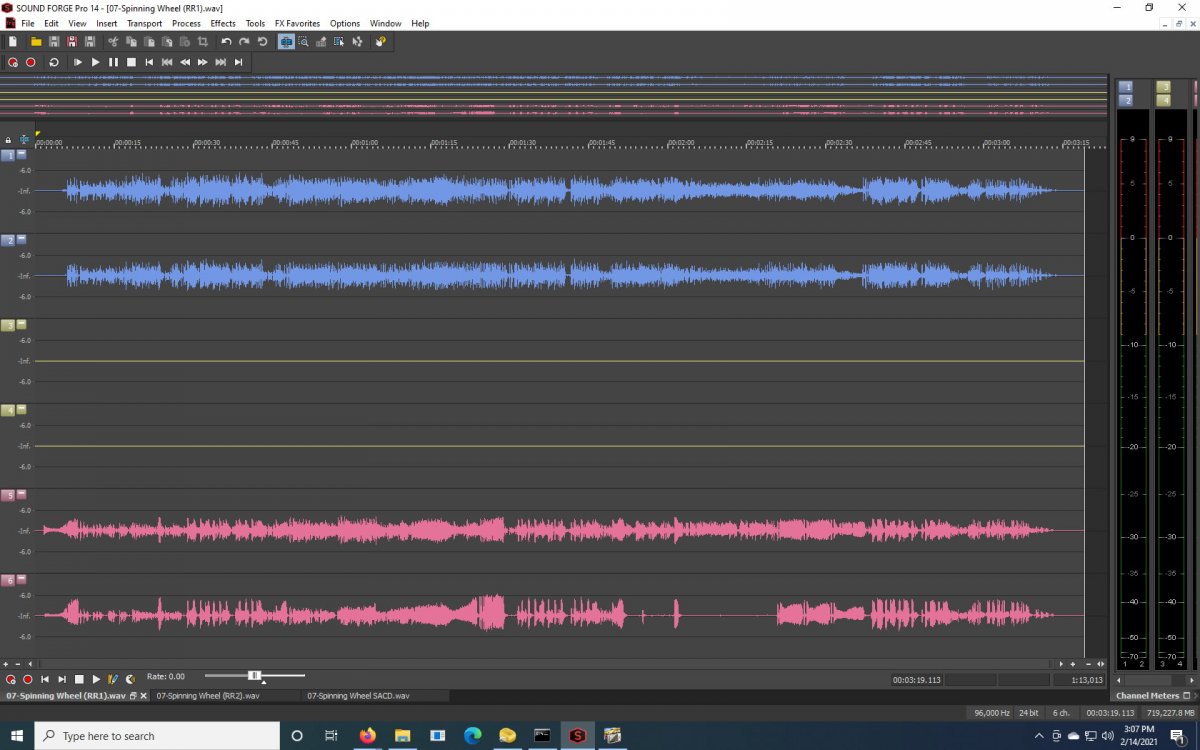 THE ROBIN REEL #2: Horns in the rear again, but different this time. Absolutely no vocals in the rears. Very discrete percussion and brass in the rears. And of course, the extended ending with talking. 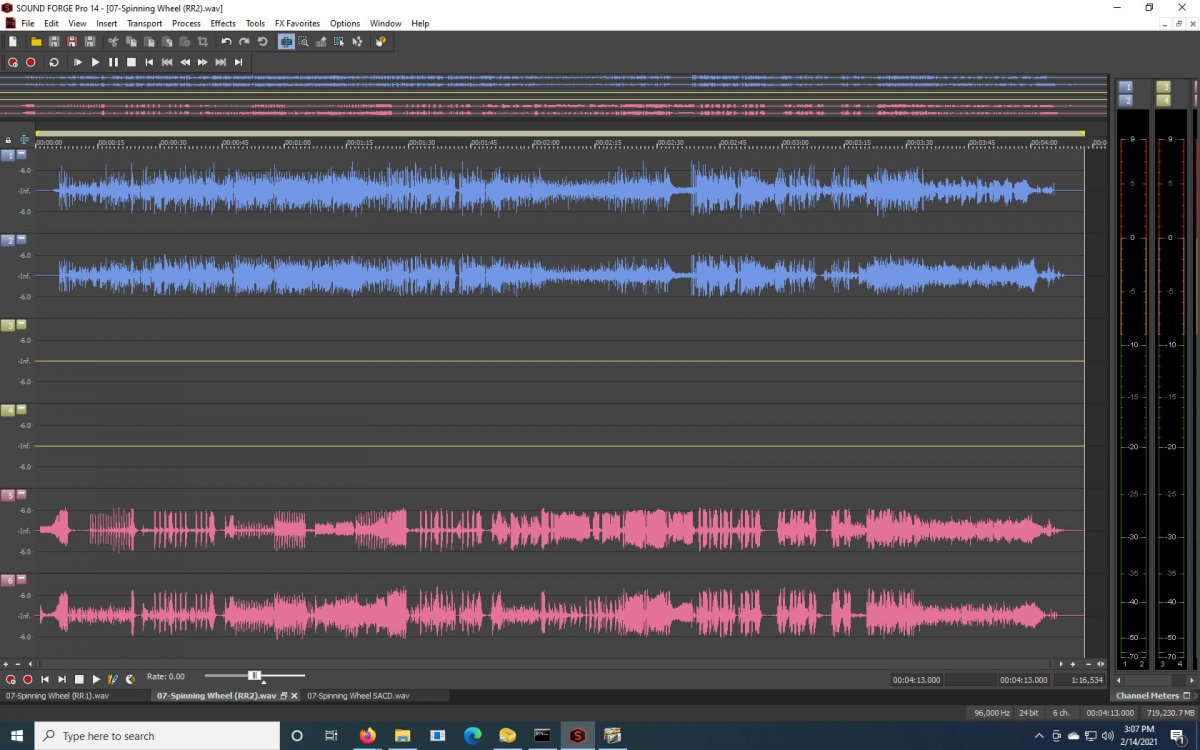 Here's a flac of the ending. I hope it fits! It didn't

So I put it on my Mega hosting, it's very small, about 15Mb.

I didn't know there were two different versions of the album on the Robin Reels. I think I only have Reel #2? Overall, I think it's a much better listen than the 'official' mix on SQ/Q8/SACD--with the only exceptions being a missing horn part in "You've Made Me So Very Happy" and the way the extended drums/bass section in "Blues Part II" is handled.

The Columbia "Underground" Quad Reels of the late '70s

Blood, Sweat & Tears Child is the Father to Man Bloomfield/Kooper/Stills Supersession The AF SACDs of these two are new 5.1 mixes by Al Kooper - the quad mixes have not been released digitally (yet). The BS&T self-titled quad was released by AF, but there are two versions on the robin reel -...
www.quadraphonicquad.com

I agree, the "Robin Reel #2" is the one for me, it's far more exciting than the other mixes, despite its flaws.

I always felt like they mistakenly pulled the wrong tape when they released the 2nd BS&T album in quad. It came out in late 1973, but I'm reasonably confident that these mixes were done much earlier (ie in 1970 or 71 at the latest, once they settled on SQ) as they don't have nearly the same level of polish as the 'new' CBS quads that were coming out in late '73/early '74. To me what's really telling is that the quad mix of the album includes those two single edits, which I can't think was intentional or preferred, given that no other non-greatest hits Columbia/Epic quad LPs include single edits in place of the album versions.

It seems like Columbia must've done a lot of quad mixing that they then had to 're-do' it when it was decided to adopt SQ as the quad LP format of choice. I think the Laura Nyro Eli album is similar, there are two unreleased quad mixes on Robin Reels, and then a 3rd mix on the AF SACD that came out a few years ago which has SQ-compliant rear speaker mixing, ie no instruments panned to rear phantom center, whereas the unreleased versions do.

I've often wondered if there are unreleased mixes of any of the other BS&T quad albums in the vault - their 3rd album seems like the likeliest candidate, recorded in 1970 and very popular through 1971, and recorded and mixed at CBS San Francisco (where Santana & Buddy Miles Live! and Santana's Caravanserai albums were mixed for quad) by Roy Halee, who was in charge of the studio there and did the quad mixes of Simon & Garfunkel Bridge over Troubled Water, Paul Simon self-titled, and Garfunkel Angel Clare there.

To me, the "Greatest Hits" Q8 mix seems to be a collapsed mix of the #2 Robin reel. Like they intended to go full four-corner discrete, only learning that it made for some silent channels in discrete and probably a messy decode in SQ. Remove that heavy separation and the SQ mix tightens up and you have fewer dead channels. Take for example the song "Lucretia McEvil" on the Greatest Hits. Horns are mostly to the rear, drums are mostly to the front. Vocals and bass are mostly to the front as well.
You must log in or register to reply here.
Share:
Facebook Twitter Reddit Pinterest Tumblr WhatsApp Email Link