I hope Ed won't mind me stepping in here for a moment, but I've been "living" with this title on my PC for the past 3 days, and I'm really psyched up about it.

This is one of those CD-4 LPs that I bought back in the '70's and played a few times, but it never seemed to grab me. Then a few years later I found the Q8 in the cutouts and played it in my car and got to "know" it. It's one of those albums that grows on you.

There is no "hit" single on here, but there are some excellent tunes, and the finale "Before the Deluge" was a JB concert staple for years and he performs it for the "No Nukes" concert movie and CD.

There is nothing like having a quad mix on your PC to appreciate the work of the "Quadraphonic Remix Engineer", and this title was compiled for quad with great care. This is demo quality stuff if you are in the "discrete - put the stuff all around me" camp. There are no swirling gimmicks, but the rears are active and contribute to the presentation immensely.

The rear right is generally the lead guitar and some backing vocals. The rear left is Jackson's harmony vocal track, along with the Eagles when they're there! Other claps, percussion, piano and accent instruments fill the back and come out from the shadows of the stereo mix to create a full spacial sound, especially on the louder pieces.

To verify that I had the correct speed for the conversion, I ripped the DCC disc of this album to my hard drive and played it along with the Q8 rip that I did, and while the Steve Hoffman disc is considered the ultimate, the quad mix opens the thing up so much more, it's truely amazing.

There is a sound effect, almost like "buzzing lips" at the beginning of the tune "Walking Slow". On the DCC, it's buried in the phantom stereo center with the lead vocal. On the surround mix, it's panned hard right front, and very prominent. When I listened to the test disc in my car, it startled me for a second, as it's very loud and discrete.

There are many things to like about this album. Even if you are a casual JB fan and only know the "hits", this might be a title that you would want to seek out on CD-4 or Q8. It's a shame that BSM does not release a DVD-A of this. It would be well worth it, I would say.

While it may be easy to give everything we like a 10, this one, IMHO, really merits one.

Of course, you may think it sucks!

What can I say? 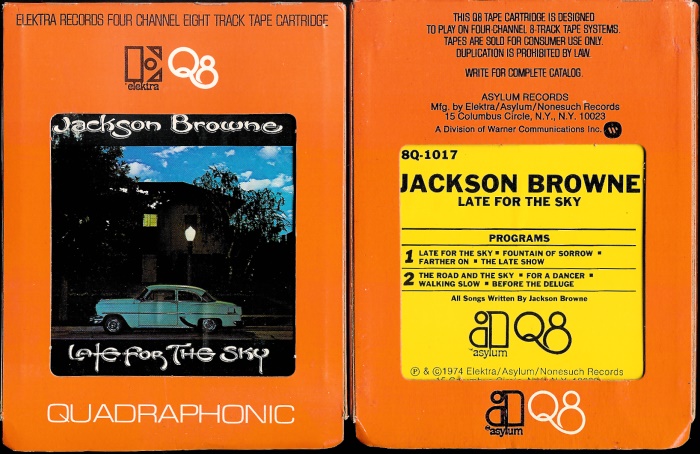 Haven't heard this one in years, but I remember it was well balanced and separated, basically an extension of the stereo mix without a lot of different things going on. Typical of Browne, a bit downbeat, but probably, song for song, his most endearing album from my POV. And, having seen him a few times back in the '80s, I can attest that "Deluge" was one of his signature songs, a fan fave. Can't say I'm overly fond of a lot that came later, although parts of RUNNING ON EMPTY are among his very best.

I'm not typically a lyrics person, being affected more by the music, itself, I guess.

But, of course, Jackson Browne is all about lyrics and this album hits hard. It seems he is wondering about everything possible anybody could ever wonder about here. And, often, you find yourself thinking, "Yeah, I've wondered that too."

It can be very sad. Especially being older and reflecting on life gone by.

OK, enough of that. The quad mix is wonderful with the accompaniments in the back channels as Jon thoroughly covered.

Probably Browne's best work if you get past the hooks of his more popular songs.

I rediscovered this album lately, though my quadradisc looks mint and decodes perfect it's pretty noisy (it looks like it's the record ruined by dunno-what-the-heck-is-there). It would be an eleven for me or even higher.
Everytime I have a listen to it (sometimes twice a day...) I feel so immerse in lyrics and quad sound fits so nice and perfect with the arrangement.

Hi, Luca! Don't see ya around these parts as much as we used to, you're missed! Hope the Quad Gods are keeping you entertained...

Not sure why, but played this one just recently, found it to be a nice late evening companion when in a relaxed mood. As many have said, the mix fits the recording like a glove, it's just 'right' throughout, and probably his finest album and the only one without a lot of 'hooks' or a 'hit' to pick it up. But that's part of what I like about it: although popular, not really a commercial album--no "Doctor My Eyes" (although "Fountain of Sorrow" coulda been a hit in edited form, and its ruminations would later culminate into the great "Running on Empty").

Hey Ed!!! Still alive and kicking, though I'm very busy with normal life problems. And I think it's time to update my quad gear here since last pictures

Had to make this my first vote here on QQ. Late For The Sky is not only one of my all-time favorite albums, it's also one of my favorite quad mixes in my collection. The mix is just so absolutely perfect. I love the way David Lindley's fiddle is so discrete in the right rear channel (most of the time.) And the combo of Jackson's beautiful voice centered in the front and the harmonies in the rear is just perfect. A quad demo record for me, not gimmicky at all, just a beautiful immersive presentation of a classic album.

Has anybody here ever seen or heard the elusive UK SQ pressing?

Great album! The content took a while to really grow on me - I think from my many conversion attempts, the songs really started to sink in, to the point where I now like every track.

I have both the Q8 and the CD-4 of this one. The Q8 is obviously more discrete, but the sound quality just isn't there, so I actually think the CD-4 is a better listen, even though it is a bit crackly-sounding. Come to think of it, I haven't really heard a good Asylum CD-4 pressing (The Eagles' One Of These Nights is a particularly noisy one).

That being said, it's one of my favorite quad mixes. Static and discrete, nothing more to it. This would be breathtaking if it was released on a good delivery format...10.
Last edited: Aug 6, 2019
F

This was probably one of my alltime favourite quad discoveries back in the 70's when it was issued. Only bought it because it was quad. Was not too familiar with Jackson Browne's tunes other than a couple am radio plays.

This is an interesting quad mix , and quite pleasing. This disc got better with each play .


Before The Deluge with David Lindley is a must listen, and a classic.

And a reissue would be so very appreciated.

I have to resurrect this thread simply because I came across it today while looking for something else. I wanna vote on it too.


This is a truly excellent JB album, Arguably his best. If you've never heard it, you need to. It was always stereo demo material to begin with because of the great fidelity. The surround version pushes it over the top to 10 territory. I only have a relatively clean HR CD-4 transfer. I agree this needs a modern release if the tapes haven't burned away. Its weird to think the transfers out there might well be the best available surround copies in existance.
You must log in or register to reply here.
Share:
Facebook Twitter Reddit Pinterest Tumblr WhatsApp Email Link