Also notable for the only *quad* appearance of "Ticket To Ride."

It never ceases to amaze me how the love of quad can make red-blooded grown men fans of the Carpenters. If any guy had listened to the Carpenters during the era their recordings came out he would have gotten his ass kicked. But I must admit, as much as I despised them in my youth, I do enjoy listening to them now.

Well, back in the day(let's say 1970-73, the duo's peak period), REAL MEN seemed to be into: the Stones, Black Sabbath, Mountain(really!), and in general, anything loud'n''noisy. Which I could identify with: we had a little clique who, every morning waiting for the school bus, gathered around one kid's portable cassette player and listened to things like PARANOID and STICKY FINGERS. Sounded like shit, but heaven when you're freezing your ass off, not getting laid, smoking on the sly, malingering, the glories of youth...

But, as a collector(mainly of singles, with some albums tossed in), I always bought the Top 40, no matter who it was, so the Carpenters were regulars on the TT for many years. And when quad came out, theirs was one of the fuller catalogs(along with Chicago and Santana)and since those titles were fairly easy to find(vinyl and/or Q8)back then, it made sense to buy them.

For Real Love of the Great Carpenters, though, you really have to visit Rudy's A&M Corner, where they make our discussions of the Carps look like the uneducated philistines we are.... .

But regardless of genre, time equals everything out, and it's obvious Karen and Richard had something special going on, otherwise we still wouldn't be listening and discussing. This album is not complete(even for the time period covered), but it's still a great survey of why they sold millions of records. Innovative they were not, but appealing? You bet!

Well I'm not that young and not that old , 34, and played most in Jazz/Rock bands.... I played death metal too and punk :flame.

I'd love a copy of this.... never seen one though, let alone listen to it!

The only quad format I've ever seen the LP in is SQ, yet at the top of this thread it's also listed as CD-4. Maybe in Japan, but not domestically. The only Carpenters album I've seen in CD-4 was the "Horizon" album, and that was a domestic release.

Here's one on eBay
http://cgi.ebay.com/CARPENTERS-JAPAN-CD4-AUDIOPHILE-QUADRAPHONIC-SINGLES_W0QQitemZ300188610756QQihZ020QQcategoryZ306QQssPageNameZWDVWQQrdZ1QQcmdZViewItem

Yes, other japanese quad records were CD-4 instead of SQ, CTI/Kudu comes to mind.
M

The SQ release of "Singles" is one of the worst SQ encoded issues. There seem to be phase issues with the lead vocals that never seemed properly located, I am searching for a reasonably priced CD-4 Japanese LP version.

motownboy said:
The SQ release of "Singles" is one of the worst SQ encoded issues. There seem to be phase issues with the lead vocals that never seemed properly located, I am searching for a reasonably priced CD-4 Japanese LP version.
Click to expand...

Ah. So it's not just my decoding or my disc. I tried two different Audition scripts, and when Karen's voice is in the left and right rear channels, it is some degrees out of phase. Summing the left and right rear channels to mono make's Karen's voice disappear to some extent, but not completely, so it's not a 180 degree phase difference. At the same time, the instruments sound fine. Do the rear channels sound this way on the Q8 and CD-4?

A&M should have stuck with QS. The albums they released in SQ all seemed to have issues, but the Joan Baez album they put out in QS sounded great.

This moght be a problem caused by the scripts you used, i'll be re-issuing it in the near future 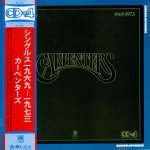 What made the Carpenters great? Richard's arrangements, great material, and most of all, Karen's voice. It was clear as a bell. Unlike so much of the mush-mouthed stuff I listened to back then (and now), you could understand EVERY word.
You must log in or register to reply here.
Share:
Facebook Twitter Reddit Pinterest Tumblr WhatsApp Email Link