10. A spectacular Quad mix and wonderful performance. This is Bill Chase's (William Edward Chialese) best album. Chase was an alum of Maynard Ferguson, Stan Kenton and Woody Herman's big bands. This isn't the band that recorded their first album with Open Up Wide and Get it ON, although this new band still featured four trumpets. It's a more adventurous, more fusion-oriented sound. Four of the six tracks here are instrumental. The other two feature Jim Peterik from Berwyn, IL, my old neighborhood, on vocals. Jim was previously in the Ides of March (Vehicle, LA Goodbye) and later in Survivor (Eye of the Tiger.) I own this album on Q8, SQ, CD and an SQ encoded Blu-Spec CD. 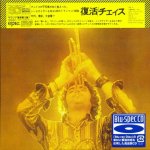 Sadly, this was to be Chase's last. Chase's work on a fourth studio album in mid-1974 came to an end on August 9, 1974. After taking off from Chicago, en route to a scheduled performance at the Jackson County Fair, Chase died in the crash of a chartered twin-engine Piper Twin Comanche in Jackson, Minnesota at the age of 39. Also killed were the Pilot, Don Ludwig, 41, of Chicago, and Co-pilot Linda Swisher, 26, Wheeling, Illinois, both qualified commercial pilots. Keyboardist Wally Yohn, 27, Scottsdale, Arizona; guitarist John Emma, 22, Geneva, Illinois; and drummer Walter Clark, 25, Williamstown, N.J. were also killed. In 1977 a Chase tribute band (composed primarily of the original lineup, plus Walt Johnson) recorded an album entitled Watch Closely Now.

A couple years after this tragic event, I was introduced to Jim Peterik through my friend Chuck. Jim expressed sadness over the tragic loss, as well as his gratitude that he was not on the plane. Before they were popular, Jim and the Ides of March played after school at Cermak Plaza in Berwyn, IL. Recent performance of Vehicle by Peterik, Chuck Soumar and the guys: http://www.youtube.com/watch?v=_EBMo8xHGNs In the '70's, the "car kabob" spindle of Wayne's World fame was erected in the Plaza's parking lot. The "kabob" was demolished a few years ago.

I vote 10, again Another one of my favorite quads. Super mix and music.

Also a 10 from me. Awesome swirls.

I saw Chase at Mr. T-bone's in Kalamazoo shortly before his tragic plane crash. He and his band were amazing. During the break he talked with we four high school trumpeters, reviewing mouthpiece selection. We were in awe!

My favorite from the evening: a trumpet-centric rendition of McArthur Park. Chase was planning this for their next album.

Excuse my newbie question. I have had the first Chase quad 8-track (which I got to listen to shortly today,) and also this quad 8 track. Both were bought in the early 80's. My good friend is entertaining the idea of transferring them onto a 4-channel RTR deck. The Pure Music 8-track tape is damaged. If the transfer is successful, can the discrete RTR be put on a Blu-ray Disc so that it can be played? Or has someone already done this? My friend and I are both former higher,faster, louder trumpet players.
I grew up in the early 70's with quad magazines but never heard it until today 45+ years later. Thanks in advance
Q

I was hobie's (and his son's) private teacher. I played professionally for over four decades. We're both (not concurrently though) medically advised to forego playing Trumpet (lead most of all) so, I decided if I couldn't do it like it should be done to retire and leave it to some of those I taught.
We got really great results from the 8 track Quad, after I flipped it over. It had somehow (in its former life) become COMPLETELY turned backwards with the oxide coating facing towards the CORE of the tape pack.

Unfortunately, during my efforts to reapply the foil tape (I'd repaired it earlier in the day) on the (now) ascertained "correct" side. The pinch roller ate about five seconds of the tape. (Sorry, Hobie. I was going to give you a call tomorrow.)

I can (and probably will) spool the tape off onto a 1/4" reell and salvage what I can. But what I'd PREFER to do, is get a Blu-Ray duplication from a pristine original.

I lack the equipment to encode four discrete channels onto the Blu-Ray, but I do have (several) Blu-Ray burners.

Another friend (years ago) very kindly sent me some other files (another Jazz-Rock group) that he long ago been decoded for his own personal use.

I'm not sure if "commercial" undertakings are encouraged or not. This is not THAT type of undertaking. It is for my personal use only. It is something that I cannot do without some kind assistance from those who have the original source on hand and a familiarity with how to get it into a digital multichannel format.

I (and I'm sure "Hobie") don't wish to do anything not "sanctioned" by the group, but I have a truly (even if I'm retired professional teacher and player) "transcription verification" interest in these recordings. What we were able to hear today revealed"aspects of the recording (particularly the inside trumpet parts) that are not easily isolated

on the stereo versions. (Along with a couple of nearly comically isolated rhythm guitar parts.)