Great mix. I play it on a 70s General Electric LP/Tuner/8-Track Component system hooked up to a Sony SQA-200 using Phase B. The 25 or 6 to 4 sounds really different than there stereo LP or CD release. Highlights certain instruments. Even though my SQ LP is scratched up most of the pops and clicks on hit channels 1 and 2. The vocals on 25 or 6 to 4 sound weak however. Beginnings emphsizes more bass. Make me smile seems to be a totally different mix. Lamms adlibs on the Now I need you more than ever are completely gone.
L

Years ago, when I had the Lafayette SW-W outboard decoder, I found the sound to be quite muffled, lacking clarity.

The SQ setting on my Sansui QRX 6001 sounds a little better but without the separation of the earlier decoder.
L

What you probably need is the Q8...

Beyond its mixes--which are pretty solid, IMO--the album is also noteworthy for having the "Make Me Smile" 45 edit, and a short "Does Anybody Really Know What Time It Is?," though as usual it doesn't match the Columbia 45 anymore than its stereo counterpart did. Unfortunately, "25 Or 6 To 4" is Lp length (there is a stereo mix of the 45 edit, however), as is "Beginnings," though there are two 45 edits of that one.

Played the Q8 this afternoon, and forgot something: yes, "Make Me Smile" is the 45 edit, but it lacks the backing vocals heard during the last verse of the stereo versions. Another example of 'sometimes you get less in quad than you did in stereo.' Ah well, such is fate....

Eleven big Chicago hits on one album?
In quad?
What's not to like?

One word describing this release? Embarassing.

Greatest hits albums in any format always had a poor reputation back in the analog era. To assemble one, it was necessary to make dubs from each of the chosen song's individual master tapes, degrading the sound quality by at least one additional generation. Then, what to do with all the different levels, sound quality and EQ come mastering time? The end result was a lot of extremely bad-sounding collections in the 1970's and early 1980's. But really, this one takes first prize.

The later releases on the album, from Chicago VI and on, don't sound too bad (maybe a little hissy). But the early ones? OMFG.
This just may be the worst-sounding quad album ever released by the normally reliable Columbia.
If I could travel back in time to the final mastering session, and was able to ask the engineer one question, it would go like this:

Engineer: Yes?
Me: I have a question about Chicago IX.
Engineer: Go ahead.
Me: Are you fucking kidding me with this?

To compare the sound of 25 or 6 to 4 to the sound of a dying, manacled gnat is an insult to bloodsucking insects everywhere. If you like your music taken from a fifth generation tape, with all bass < 250 Hz filtered out, then dubbed on to your child's cassette tape recorder before being mastered (poorly) on disc, then this is the album for you. Even 31 years ago, listening to this on my father's system, I knew something was terribly wrong. Was this just the way old songs were recorded?

All one need do to answer that is put on the Chicago II DVD-A.
'Nuff said.

The other early tracks Make Me Smile, and Beginnings are similarly limp and lifeless.
(To hear what the latter should really sound like, check out one of the DTS conversions of the excellent Chicago Transit Authority.)

And another thing.
Chicago IX came out in 1975 -- fall, I think. Where is Old Days, the top 5 hit from that summer? The failure to include this track is just the cherry on this crap sundae.

If you like Chicago, my advice is get the individual quad albums (or DVD-A's) and steer way clear of this dirt sandwich.


Chicago IX came out in 1975 -- fall, I think. Where is Old Days, the top 5 hit from that summer? The failure to include this track is just the cherry on this crap sundae.
Click to expand...

From memory i think they left it off, because the previous lp chicago viii ( which has "Old Days" on it) was close in release to Chicago ix.....so they thought they were like selling you something that you may have just bought....so any top 40 single release form chicago viii ("Old Days" and "Harry Truman") wasn't put on chicago ix...

so with that logic they put "Old Days" on the greatest hits volume 2 ..Chicago 15...or should I say Chicago XV..

anyway if you threw "old days" on ix , you'd have to take something off to fit it in...or else the narrow groove spacing would worsen the quality.

the columbia pressings varied on this...but the chicago vi and vii tracks would always sound better in those days, because those lp's originally sounded better than the earlier ones when they all came out in the 1970's....in fact at the time their best sounding lp sonically was chicago vi , followed by vii, then v.....
but yes adding another generation of tape and squeezing hits onto one lp does tend to mess things up...

and although the dvda's of chicago ii and v are a sonic masterpiece and blows this away, I still love the quad version of 25 or 6 to 4, because it has Terry Kath's guitar completely unedited, turned up the whole time in the mix.

ChristopherLees said:
the columbia pressings varied on this...but the chicago vi and vii tracks would always sound better in those days, because those lp's originally sounded better than the earlier ones when they all came out in the 1970's
Click to expand...

I don't recall any specific problems with the album pressing per se, other than the usual tics and pops. Columbia's LP's were second to no other major label in the 70's, which of course was the nadir for pressing quality due to the 1973 oil crisis. Are you saying the pressings varied in quality, or the mastering? Columbia did in fact quietly reissue different masters of certain albums, but in all cases I know of it was to add or change content, not to upgrade quality. (Example: Toto's debut, initially issued with the single version of Hold the Line and later with the long version.)

No, my gripe is with the master. Even considering the technical limitations of the day, it's just horrendous. There's no reason for those early tracks to sound so bad. Knowing that many quad titles were rush-released, I'm guessing they may not have had time to locate all the individual quad masters to dub, and instead used safety copies. If I'd been a band member and heard this release, I'd have taken hostages.

I think you may be wrong about early Chicago releases on LP sounding bad. The (stereo) Columbia releases I have from the time sound okay -- hissy and light on bass, but nothing like Chicago IX. In any case, we're talking about how they sound on a 1975 LP, not originally. The underlying recordings are solid, as the Chicago DVD-A's and individual quad albums attest.

I'd like to get my hands on a converion of II so I can get a good listen to the quad mix and compare to the DVD-A.

Took a listen to the stereo "Wishing You Were Here" -- damn, you're right about that missing guitar. How irritating. I've really only heard the quad mix for 31 years and never noticed.

I know this to be the absolutely worst sounding SQ LP I own. I'll never forget how disappointed I was to find how audibly inferior it was from beginning to end. Just as godawful@: on my Audionics SAIC too. It's good to see from some of the other comments that I am not alone on this assessment. Giving it a 1 because there isn't a zero to select in the polling!

Does this one contain the same alternate 25 or 6 to 4 guitar solo that's on the Chicago II Quad?

7. Perhaps that's being generous. 11 for the music and 3 for the sonics. What the hell were they thinking? Cheap and fast is my guess. Yes, they are all edited 45 versions of these songs. Hence, Kath's alternate solo is missing. FYI: the CD is the unedited album versions, albeit in 2ch. 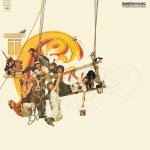 jaypfunk said:
Does this one contain the same alternate 25 or 6 to 4 guitar solo that's on the Chicago II Quad?
Click to expand...

Oh shit that's right, I forgot that these were all single edits.

As usual for the Columbia quads, the cover of my New Zealand pressing has just a Quad sticker over a plain old stereo cover...

And yes the tracks from CTA & (II) sound horrible, but all the mixes are great... I have to say that this is better than I thought it would be from the comments.

jaypfunk said:
Oh shit that's right, I forgot that these were all single edits.
Click to expand...

Well, no, they weren't: "25 or 6 to 4" is Lp length, but I did make an error on "Beginnings." Beyond the radical remix, the quad version runs 6:30 to the original stereo Lp's about 7:50, therefore fading out before the percussion coda. I realize that because I played this one back again tonight, because the latter had been playing in my head. Hadn't played either edition in some time, so I'm sure (beyond one's opinions of the sonics) there are many little things with every song that differ from the original stereo.

Eggplant said:
Eleven big Chicago hits on one album?
In quad?
What's not to like?

One word describing this release? Embarassing.
Click to expand...

Reviving a dormant thread to agree with this entertaining and informative review.

I'm listening to my recently purchased copy of the SQ LP and it's easily the least impressive sounding record in my small SQ collection, which is a shame considering the music is among the best in my SQ collection.

leeherman said:
Reviving a dormant thread to agree with this entertaining and informative review.

I'm listening to my recently purchased copy of the SQ LP and it's easily the least impressive sounding record in my small SQ collection, which is a shame considering the music is among the best in my SQ collection.

Make sure you pick up the Chicago Quadio set and hear it as it was meant to be heard.

Although I enjoy the album for what it is, it does have some oddities, like "Make Me Smile"'s 45 edit. However, this version lacks the backing vocals heard on the stereo 45. This seems like a sloppy mistake, which would tend to validate the opinion of some that the quad Lp was hastily assembled, the quality of which was hurt as a result.

Make sure you pick up the Chicago Quadio set and hear it as it was meant to be heard.
Click to expand...

I forgot to reply here, but yes, I did end up getting the Quadio set a few months ago and it was money well spent.

Thanks for the recommendation!