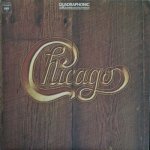 9. As I said on the DVD-A poll: what's great is fantastic: Saturday, Dialogue, While the City Sleeps, and A Hit by Varese. Much of the rest is uneven. I've had the SQ, DVD-A, LP, CD & expanded CD of this. A woodie.

Also a '9' here. Interestingly, this was a #1 jazz album (!) in Billboard, and admittedly it has more connection to that genre than any of the band's other albums, although there isn't much here I'd call fusion, at least not in the Miles/Santana/Mahavishnu sense of that concept. But the muck is kept to a minimum, fitting for a single-Lp project (a first for Chicago, and unexpected given the expansive 4-Lp CARNEGIE HALL marathon). "Dialogue" was a trenchant, challenging piece at a time when rockers were finally voicing their politics a little, the first hint of more to come from many.

You know, so many Chicago albums were on SQ and Q8, yet I have never found any of them. I would have thought that I would have found at least one SQ by now, but no. I figured it would be like Santana, of which it's not too hard to stumble across most of the Santana SQ's. Actually I've had a hard time finding the Enoch Light/Project 3 quads as well, which those should be fairly common, I even remember seeing more of those before I started collecting quad like a madman. Now I never see them.

Is there any particular reason why I'm not at least finding some of the Chicago SQ's locally (like most places, there are more stereo copies than anyone will ever buy again) or should I just attribute it to my luck not extending to Chicago quads?

Chicago Quads were pricey. CTA is probably the biggest example of this. The 2 LP set was originally a $5.98 list (a buck up from a single.) By the time the Quads came out, they were so wildly successful that CBS went full boat on them. CTA on Q8 was $2 up for tape, $2 up for Quad and the cost of two tapes, which it was. When CD's first hit, both CTA and Chicago II were $30 because they were on two CD's. Kind of ridiculous for albums that were $5.98 & $6.98 when they first hit 13-14 years earlier.

I've also noticed that the Chicago quads are not nearly as abundant as others, and have wondered why. For the Q8s, it may have to do with the double albums. But, one thing that sticks out to me is the fact the SQs do not have gold borders. The Santana 1st album in SQ (which isn't that common to find) also has no gold border, and came out later than the far more common Abraxas, III, and Caravanserai, which do have the gold borders. I'm thinking perhaps the Chicago quads came out later in the game, and the later titles are less common?

I don't have any dates, but I know from an interview with Wayne Tarnowski who was the band's engineer (and quad remixer) that the Chicago albums weren't remixed for quad until the band's Caribou Ranch studio was opened, and that was 1973. So it's likely these didn't come out until the latter half of 1973 for the early ones, and then the later ones came out around the same time as their stereo counterparts, which would've been 1974 for VII, 1975 for VIII and IX, and 1976 for X. I sort of go by the general rule of thumb that the quad era was 1972-1977, and the closer to 1977 anything was released, the shorter time it was in print and the less copies were made.

Just took a look at my SQ copy of Chicago III, which has a date of 1974 on the label. The SQ of Santana's first album also lists 1974 for the year. My SQ copies of CTA also have a year of 1974 on the labels. It seems that the earlier Chicago albums were released in quad in '74, by which point the gold border was dropped, and less copies were being pressed.

The early Columbia (gold border) quads were 1971 & '72; after that most of the covers were customized with the addition of the quadraphonic designation integrated into the cover design (if there was a custom record sleeve, the stereo sleeve was generally used, since it would have a stereo prefix).

In '73, Lee Loughnane's uncle was a client of mine. He told me that they were working on Quad mixes of all their studio albums. Sure enough, they were released in early '74. The Quad of VII came out a few weeks after it's April '74 release in 2ch. VIII-X had Quad releases that were simultaneous with the 2ch.

Yes, you are correct that Columbia Quads without gold borders are less common. Gold borders were abandoned in mid '73. Caravanserai, Azteca, Paul Simon and Birds of Fire all came out in Quad in '73 with Gold borders. Buddy Miles' Chapter VII came out in summer '73 in Gold. Angel Clare and Rhymin' Simon came out in fall '73 in all formats. The Quads were sans gold borders.

The later it was released, the fewer Quad copies were pressed. Scarcity is also tied to the album's popularity. Harry Partch and Thijs Van Leer are far less common than Santana, Streisand or Paul Simon.

I just wish they had gone one step further and done the labels on the quad releases in the same style as their stereo counterparts. The incorporation of the cover design and the script lettering were all part of the packaging to me, and that is sorely missed on the quads. And don't say it couldn't be done: look at the label on the quad edition of Santana's "Welcome."

Of course, they also didn't do the cool label design when Rhino started their re-releases of the catalog on CD, either. Come on, guys: if you can research & include bonus tracks and works-in-progress, how about remembering the visuals? Opportunity lost.

True, although I find that of minor concern at best, since sound and mix are what we really care about. That said, WYWH had the custom label, and I think, Santana's AMIGOS as well. Could be that those who assembled the Chicago albums just didn't give it much thought, though the first three didn't have custom labels anyway.

My first pressing SQ of Santana Welcome has the identical graphics to the 2ch LP release. Quad #'s and verbiage are the only differences.