A while ago I was able to convert HD-DVD disc audio to flac without issue, but I am really struggling today. Maybe it's because my source disc splits the program into two separate files. I'm not sure. Here is the file list: 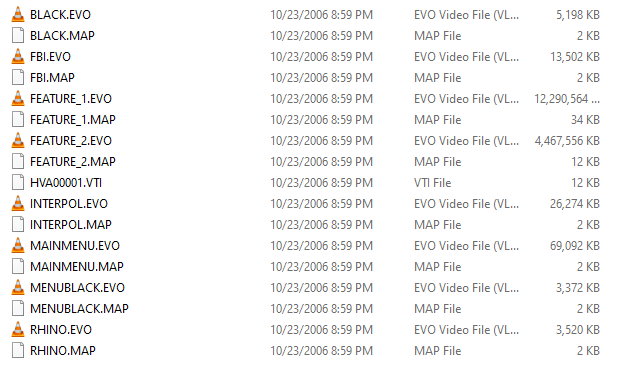 So there is FEATURE_1.EVO and FEATURE_2.EVO. I did a lot of Googling on this.

First off, I tried MakeMKV which chugs along, then crashes when it should finish. So I researched and found that if I went back to version 1.9.9 it would work better with HD-DVD. It showed the disc structure better, but it still crashed at the end.

I then continued reading and found that there was a program called HandBrake. I downloaded that and tried it. I got it to create MP4's out of the .EVO's and they actually play with Media Player and VLC player, but Foobar and/or AudioMuxer cannot get audio out of them.

I then tried tsMuxeR. Created .ts files and then .mt2s files of those .EVO's, and again, nothing works and I get errors like "Invalid Media Stream" at the end.

A feature of tsMuxeR is it allows you to JOIN the two pieces, so I tried that, thinking that was the issue. Well, it worked out fine creating a single .ts file that played with VLC player but nothing I have can get at the audio in that .ts file. 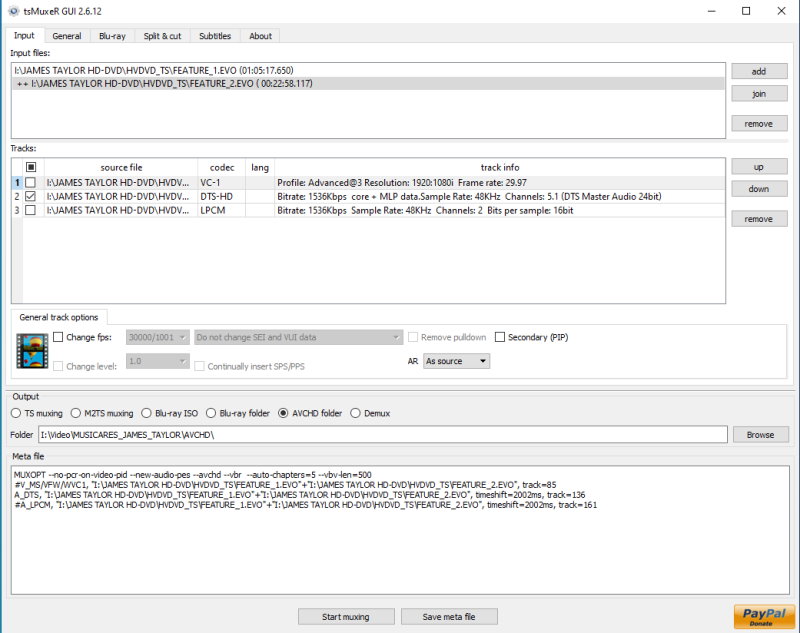 I am thinking that I am fighting some type of copy protection or something else.

So, I just figured I ask here in case on of you experts have ever run up against this issue. I know, HD-DVD, not the "topic of the day", but still, they're out there and maybe this thread can help someone in the future. Even if it helps them NOT waste their time trying this.

Convert the ts file to MKV then use MMH or Audiomuxer to extract to FLAC.

MKVToolnix (free) has a UI to convert a ts to MKV.

HomerJAU said:
Convert the ts file to MKV then use MMH or Audiomuxer to extract to FLAC.

MKVToolnix (free) has a UI to convert a ts to MKV.
Click to expand...

Thanks Garry. That sorta worked. I went from .EVO to .ts to .mka (each one separately), then let Foobar convert the .ts to .flac. The smaller file came out fine, but the larger file ended early and with distortion at the end of the rip.

I am trying it again directly from the HD-DVD disc, but this may actually turn out to be a case of Laser Rot!

JonUrban said:
.. but this may actually turn out to be a case of Laser Rot!
Click to expand...

That’s quite possible Jon.
A

JonUrban said:
I am trying it again directly from the HD-DVD disc, but this may actually turn out to be a case of Laser Rot!
Click to expand...

HD-DVD *really* sucked when it came to that. I have some that were dead when new and many more that once worked but no longer do.

Also have at least two that locked up in the player but did fine with MakeMKV.

It's Laser Rot I'm sure. All of the programs and methods bomb out at the end of PROGRAM_1

Here's one of the messages I got, this one from Foobar when trying to play the resulting .mka from MKVToolNix

Well this disc is shot. Sadly I waited too long to convert it, as it really does have a nice Elliot Scheiner 5.1 mix, even though it's a live show. Fortunately, in all of the wacky steps and converting I did I was able to get all of the music but one track, which is sort of remarkable. And the bad track is "You've Got a Friend" with Carole King and JT, and really, there are probably 100 versions out there of that song by those two, so of all the tunes to be in the rot, that was the best choice.

These freaking discs. BluRay's rotting, HD-DVD's rotting, LaserDisc's rotting - and these things were supposed to last "forever" and be "indestructible". Ha! Yeah, right.