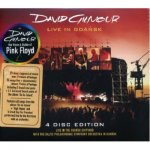 Please rate this CD/DVD package, stating where possible what version you bought (there are various editionsavailable from 2CD/DVD to 4CD/DVD Box Sets as well as limited edition standalone DVD) and what you paid for it.

paid the full price for the big box when it came out. definitly not dissappointed with the performance on the DVD only that its not the whole show.
possibly the best version of 'Echos' i have heard live.
IMHO this was a better live performance than the Albert Hall show which was released.

Mucho extras many of which are fun, the Barn Jams fo instance.

The surround will not set the world on fire but it was a live show, so not that dissappointed.

Please, please release the full Gdansk concert on blu-ray with lossless 5.1, along with a bonus On An Island BD-Audio in 5.1.

HomerJAU said:
Please, please release the full Gdansk concert on blu-ray with lossless 5.1, along with a bonus On An Island BD-Audio in 5.1.
Click to expand...

As much as I'd love this, any unreleased Pink Floyd/Roger Waters/David Gilmour album surround mixes should be released first! The dts DVD of "On An Island" works just fine for me (not to mention the superb Royal Albert Hall Blu-Ray that has many of the same songs as the Gdansk concert, even though Gdansk is a superior performance IMO)

"The Wall" in 5.1 surround remains the #1 must have Pink Floyd surround mix for me:
https://www.facebook.com/surroundthewall
O

Got the 4-disc version. Been listening to it a bit lately in anticipation for the new album. Would really like to see this re-released in full on Blu-ray as well, as I think it's much better than Remember That Night (which isn't too shabby itself). But as it is, it's great. The On An Island record comes alive a lot more because of the orchestra, and some of the Floyd numbers have never sounded better. It's a solid tribute to that music, specifically the contributions of Rick Wright, of which this is his true swan-song.
O

BTW, I just noticed that there are few copies of the DVD versions left on Amazon. It could be a good sign there will be a Blu release at some point.

This is a great package! I paid £23 for the 4 disc version in Norway. Great concert (wish for it to be released in full on Blu Ray) and I love the 5.1 surround version of On an Island.

Spock said:
This is a great package! I paid £23 for the 4 disc version in Norway. Great concert (wish for it to be released in full on Blu Ray) and I love the 5.1 surround version of On an Island.
Click to expand...

You have to get in line behind a few thousand of us waiting for that one!

I was thrilled to get this set (2 CD/2DVD) and it really offers a lot in terms of quality. It's also something I enjoy putting just as much as Live in Pompeii. This being the last time Rick was part of David's group gives it an extra emotional punch. The cherry on top is the On An Island 5.1 mix (thank you Andy for knocking that one out of the park!)