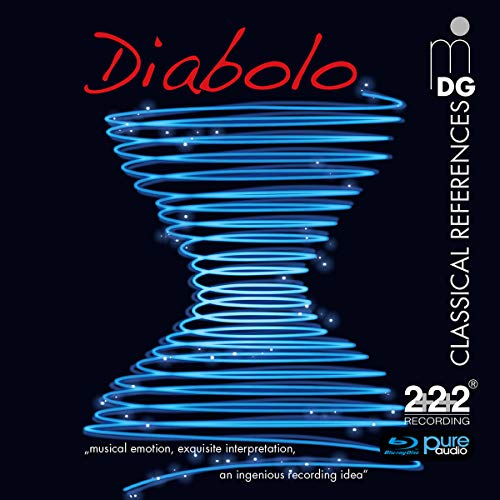 I had to read the booklet to see what the heck 2+2+2 and 2222 meant. I still don't know what 2222 is except that it's probably a reference to their own custom format of 8-channels total (i.e. short for 2+2+2+2) they were recording and playing with that could be converted to full playback using the Auro-3D 8.0 system. I had trouble locating the Auro-3D track off an MKV dump at first because it's oddly stored in a DTS-HD MA 4.0 track (I guess 4.0 + hidden Auro-3D signal = 8.0?)

The 2+2+2 is apparently a format they came up with that uses Left, Right, Surround Left, Surround Right, Front Height Left and Front Height Right according to the booklet it came with. Oddly, it's stored in a DTS-HD MA 7.1 track that my AVR shows as DTS:X even though it's not really DTS:X at all and sometimes my AVR has trouble locking onto the signal (probably because it's not 'real' DTS:X), but once it does, it does appear to work correctly (I get distinct front heights that are different from the lower channels. I had to disable my dialog lift feature to test this since it send some of the lower channels upward to move the soundstage up, but once off sure enough there's discrete front height playing with it). If I read the booklet right, it seems the SACD version requires rewiring the 5.1 outputs to play correctly as it apparently uses the center output and LFE outputs for the front height channels. That sounds like a pain to change out for what can't be more than a few recordings from the Pure audio label?

The 5.1 and stereo tracks appear as normal DTS-HD MA 5.1 and PCM 24/96 on the disc (The latter which can be converted to FLAC 24-bit for KODI playback of an MKV dump of the disc run through Handbrake (which you can reduce the video signal to the lowest setting since it's just a black screen) and save a bunch of space compared to the straight dump.

I don't have a SACD compatible player at the moment to test the SACD layer of the hybrid disc directly (I could easily play the CD layer in a regular drive), but it supposedly contains both a multi-channel 5.1 layer and a 2+2+2 layer, which as I mentioned above might require rewiring your 5.1 outputs to use them as front heights instead (I didn't even know the LFE channel could play full range if reused?)

Overall, however, the classical recordings are EXCELLENT quality and sound especially good in Auro-3D here. There's 28 tracks of varying artists so it's a mixed bag, but you have to appreciate an orchestra that sounds like it's very nearly "real" instead of a stereo image and that's generally what I've gotten from most Auro-3D classical, chamber and jazz/big band type recordings thus far (including the demo discs).

Rock can be just about anything they want it to be as it tends to be mixed. I've also heard some excellent Atmos recordings (namely John Williams Live in Vienna and Hans Zimmer Live). The John Williams one in particular sounds very realistic. The Hans Zimmer one includes a lot of unconventional instruments, but is unbelievably dynamic and outright scary at high volumes at times (my ears were ringing and I got my sound meter out and found it was outputting 105dB A-weighted here during the loud parts. Ouch. You could damage your hearing at those levels. But it was so quiet earlier in the same concert, you want to crank it up. That's some major dynamic range and can be dangerous if you don't watch the maximum output parts (to your speakers too if not your ears if you hit the rails and go square wave).
Last edited: Sep 16, 2021
You must log in or register to reply here.
Share:
Facebook Twitter Reddit Pinterest Tumblr WhatsApp Email Link