So, some of you may have been into this little hobby of ours for over 20 years now. Those who were may remember that back when we would actually get excited about DTS CDs, the DTS folks had their own online store where they sold their discs direct to customers like us. When they decided to close down their online shop, they had a blowout sale and were selling off remaining stock very cheap. I seized the opportunity and bought lots of stuff. Among the titles I bought were several classical titles. None of them is particularly discrete in terms of the mix (though most of them are sourced from 70's quad maters.) So as it turns out, they have collected a lot of dust over the years. I recently pulled out a few to give them another test drive and find that I don't think that I would miss them. So.....I am offering them up as one mega-door prize. Each has been played at most only once or twice and are all still in great condition. There are nine titles total as follows:

So onto the rules:

Please respond to this thread with any three-digit number before 12 noon EST on Thursday March 14, 2019. The winner will be determined by the State of Connecticut's Play Three Night lottery drawing on the evening of Thursday March 14, 2019. Whoever is closest to that evening's winning lottery # will be the winner. In the event of a tie (i.e., if the winning lottery # is 100, and one person guessed 90 and another guessed 110) the person with the lower # will be the winner.

One entry per person and please check to make sure that nobody else has already chosen the number that you are choosing.

I will open this up to all members regardless of where on planet Earth they reside. However, if the winner is not a U.S. resident, I will ship the discs without jewel cases (in paper sleeves) to reduce postage costs. 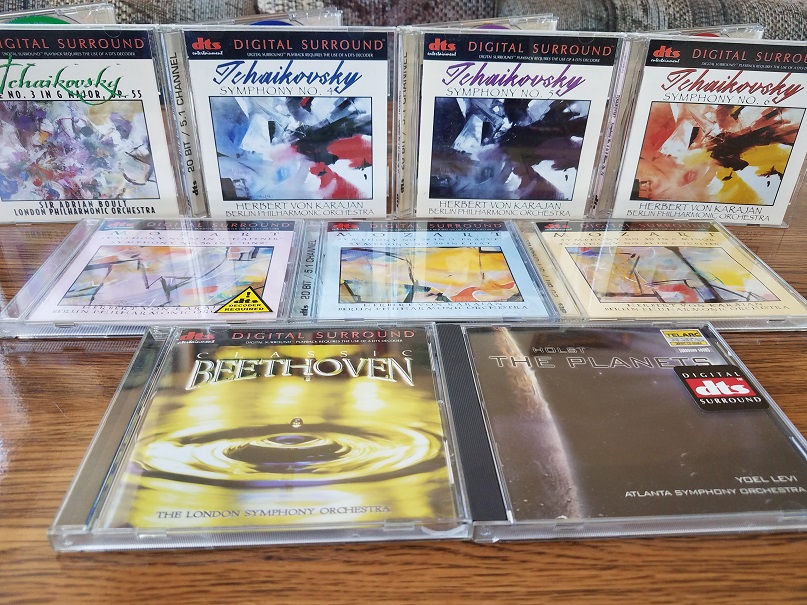 901. Thank you so much for this opportunity.

These are absolutely wonderful, and a real pain to assemble cheaply. I have them so I'm not in, but I hope they go to someone who enjoys them. The performances are top-notch, of course - original EMI recordings of Herbert von Karajan, renegotiating his contract with Deutsche Grammophon by recording for EMI, conducting the Philharmonia Orchestra (London-Based). The surrounds aren't particularly active but give a sense of space and of "being there" that you don't get with stereo, the center channel is silent.

I need to relisten to Yoel Levi's version of The Planets, but it should be a technical masterpiece, at least in terms of recorded sound (it was made just before the high-res era in the mid-90s).

410. Thank you private universe!
I

Bases on your avatar, I would have thought you go with 666!


Sent from my iPhone using Tapatalk

Very generous and a fantastic opportunity for someone. I'll go with the Hawaii area code: 808
Thanks!
You must log in or register to reply here.

Classical Music: Do You Prefer Immersive/Middle of the Orchestra or Ambient/Hall Multichannel Mixes?
2