View credits, reviews, tracks and shop for the 1974 Vinyl release of "Planet Waves" on Discogs.

View credits, reviews, tracks and shop for the 1974 Vinyl release of "Planet Waves" on Discogs.

Don't believe I've ever heard the Quad of this one; I've got the Dylan SACD box set from Sony. There's also an MFSL SACD, again why not a Quad release as with some of the others?

Would love some comments / reviews on how this one sounds!

I've owned this on Cassette, Q8, CD-4, CD & 2ch SACD (in SACD box). This was the third Dylan album released within a few months. First, there was Pat Garrett. Then, came Dylan, a CBS collection of scraps from the cutting room floor. Those were from late '73. This was released in early '74. Dylan had signed with Geffen's Asylum (WEA). After "Knocking," I eagerly awaited his first regular album release in 2 1/2 years.

Elation and mild disappointment. Although Planet Waves is a very good album, it isn't a great album, IMHO. Forever Young is a true classic. Going, Going and On a Night are also very good tracks. Most of the rest just never quite hit me.

I am a Dylan fan & completist. I bought my first Dylan LP in Grade school.

Musically, I'd rate this a 7. Far from bad. Perhaps just as far from his best. It is my least favorite music of the three Dylan Quads.

IMHO, it is the best mix & format of any of his three Quads. Give that a 9. Typical WEA Quad mix.

The two SQ's are musically better, IMHO. Neither SQ Quad mix enthused me, however.

"Something There Is About You" is such a stellar song. That song right there and four others are worth the price of a 50/50 album.

The CD-4 sounds great in stereo. Too bad there was not a Q4 issued.

I don't really know this album at all (not a Dylan fan) but I found an interesting interview in the March/April 1974 issue of Recording Engineer/Producer with engineer Rob Fraboni, who engineered the album, and Dick La Palm, manager of the Village Recorder studio where the album was done.

There isn't much about quad in the interview, but Fraboni does mentions that he's working on the quad mix for the album at the time that the interview was conducted: 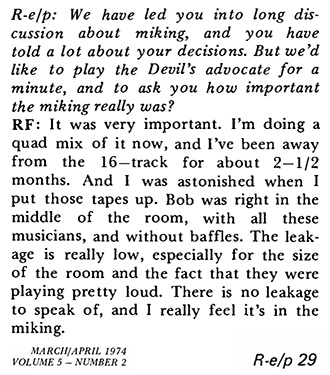 This is somewhat "new" information as the jacket for the quad LP just reused the stereo artwork so there was no confirmation that Fraboni did the quad mix as well, until now.

If you like Dylan, or have an interest in recording and mixing, I think the interview (which starts on page 19) is well worth a read - it does get overly technical at times (I think there's a whole page on what kind of microphones were used, and how) but there's a lot of interesting information about how (and when) the album was recorded, and the amount of input that both Dylan and Robbie Robertson had on the sound and final mix. I've always felt that in one way, albums are kind of like an aural document of work that was undertaken, so to have more information about that work just adds more context that only serves to deepen my appreciation of what I'm listening to.

As a side note, it's interesting just how much stuff it seems was mixed for quad at the Village Recorder, a relatively "less famous" studio compared to the Record Plant, Capitol Records, or the Warner or CBS studios. Not only was this album mixed there, but Ed Michel and Baker Bigsby did most (or all?) of his ABC/Imuplse!/Bluesway quad mixes at the Village Recorder, and apparently some of the Fantasy/Prestige/Milestone quad work was done there too.
You must log in or register to reply here.
Share:
Facebook Twitter Reddit Pinterest Tumblr WhatsApp Email Link