swam36fc said:
Mine too. Maybe that's what they label the status as for all pre-orders? My credit card charge is pending status, so they shouldn't run the charge through until they send the box out, I would think.
Click to expand...

That is correct...I called yesterday and they also said would be in by end of this month

Good to know. Thanks Music

Yes, thanks, this is very assuring. Hey, I just got a update notification from Discogs about this box set. The April release is a new pressing without the limited 3000 numbering: Emerson, Lake & Palmer – Fanfare 1970 - 1997 (2017, Box Set)

Interesting, a "new" pressing. What do think the chances they fixed the Trilogy 'bonus track' thing?

Good detective work, thanks for sharing that.
The original numbering was pretty bogus, placed on the throw-away outer wrapper under the shrink wrap.
I taped mine to the inside of the box lid.


Matt Wilson said:
Interesting, a "new" pressing. What do think the chances they fixed the Trilogy 'bonus track' thing?
Click to expand...

The discogs note clearly states no difference other than lack of numbering.
Soo... slim to none?

And don't forget the "flawed" bass guitar mixed in all channels on the last track of BSS.
Oh, the horror!

Don't bother me, YMMV.
When I saw the used prices on this go through the roof, I cheerfully bought the BSS DVD for $50 to have both.

I think it's great this is getting another release.
In spite of the "defects", to my knowledge it's the only single blu ray ever released containing four full classic out of print surround albums plus bonus tracks.

This new promotional video appeared yesterday, ending with a release date of June 11, 2021:

I purchased this box set when it initially came out. I got it primarily for the 5.1 mix of BSS. Plus I thought it would be nice to have for the live material. I was very disappointed in this box set. I kept the blu ray disc and gave the rest away to a friend. Sorry guys but I personally felt like I spent $180 bucks on a big piece of crap. I love ELP. I think it is a crime how their catalog is being treated.

I have my pre-order in for this set, but my only interest is in the blu-ray disc with the 5.1 mixes of the four albums. Acoustic Sounds states that these are to ship this month, but I'm wondering if the release date of June 11 will end up being the ship date as well? Only a few days left in April, so we'll know soon enough.
J

Matt Wilson said:
Interesting, a "new" pressing. What do think the chances they fixed the Trilogy 'bonus track' thing?
Click to expand...

Can someone please report if this is indeed the case and trilogy bonus tracks have been sorted?

( Just confirming ! )
The Fanfare pre order on Amazon.com says Vinyl $198 and next to it CD $1176 or something ridiculous. There is only one Fanfare release right ?
Not a choice between vinyl and CD ( I know there is a triple vinyl live album and two 7" singles) Is that the vinyl release as specified by Amazon ?
Why do they have a CD release next to it ?
It's not available from Amazon Australia....so I don't want to have to return it to the US !
Cheers

Cancelled original order this is a great deal!!

Ship Confirmation For Your Order With ImportCDs.com

For Australians....the ELP box set is now available for pre-order from Amazon.com.au for $251 au !

I just ordered from ImportCD and they currently have a 10% code (I.e., HAPPY10) off any items in stock - and this box set is currently in stock!! 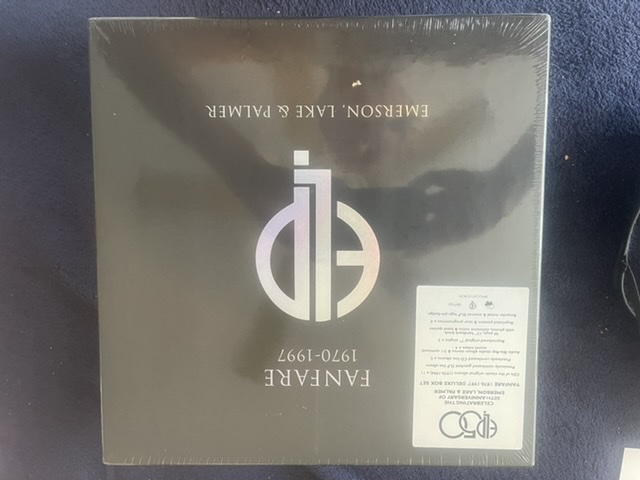