Released in stereo in April, 1974, the Four Tops third (and final) quad release for ABC was a Q8-only affair - possibly because the QS LPs of their previous two albums were issued as part of ABC's Command Quadraphonic series in January 1974 and the label didn't want to oversaturate the market.

The other unfortunate commonality that Meeting of the Minds shares with its predecessor (Main Street People) is that it's never seen digital release, suggesting the master tapes are either missing or lost in the 2008 UMG vault fire. Having said that, I'm surprised that in the 30+ years since the advent of the CD that they haven't managed to dig up at least a safety copy of the master tapes somewhere, given that these albums were issued in territories all over the world, and presumably tapes were sent out to foreign labels so they could cut their own LPs. 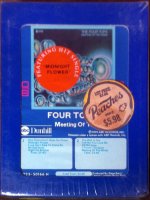 A little slower than the previous two albums. This one starts out with an explosion with "One Chain don't make no Prison". Not a bang, an explosion. I'm honestly shocked that this seems to be such an obscure, hardly-known album. "One Chain" should've been a chart topper. The album itself never broke into the top 100 and maybe it's because the album cannot stand on the strength of the opening track. The rest of the album, while it has it's high points, never reaches the same high as "One Chain".

The mix is pretty standard ABC, though for this one, backing vocals are in FL and BR if I'm not mistaken and I think they do the same with the string section in FR and BL. I'm not a fan of this mixing style as it ruins the stereo image of each speaker pair. It's not bad in headphones, but really, how often do you listen to Quad with headphones?

I really didn't start listening to artists like The Four Tops until later in life (mostly Rock music in my youth); but that whole R&B, Soul, Funk sound has grabbed me hard in my later years and hearing albums like this one in Quad is even deepening my love for the music. It just opens it up and expands the sound (as a good Quad mix should.) Even though there's no big hits on this album, I think it's just wonderful, and very enjoyable.
The Four Tops really got going initially with Motown and the writing team of Holland-Dozier-Holland. They later moved to ABC/Dunhill in around 1972 when Motown moved out west to the L.A. area. But what music was produced out of that little Detroit house called Hitsville U.S.A. was astounding and ground breaking.
This movie about those times is a must watch IMO, told by the people who were there.

Here's some notes I jotted down while listening to this recently from a good Q8 conversion.

1: One Chain Don't Make No Prison
- One of the better songs on the album, with Congas in Left/Rear, Rhythm Guitar in Front/Left, lead Guitar in Right/Rear, (the vocals in the phantom center sounded a little light to me), strings in the L/R, Electric Piano L/R, Bass seemed a little too light for my liking, and Backing vocals in the R/R.
2: Midnight Flower
- Good separation, and a stronger Lead Vocal in the front, would have liked the rears lowered slightly on this one.
3: Love Ain't Easy To Come By
- A little stronger phantom center lead vocals, a slight harshness in the strings and a Sax. in the L/R.
4: No Sad Songs
- One of my favorite tunes on this album, it's got a real funky feel to it that reminds me of something Art Neville's The Funky Meters would play; and shows the kind of diversity on this album. Horns in R/R and organ solo in L/R. Nice guitar licks in both the rear channels.
5: Right On Brother
- Lots of strings on this one but they sounded slightly dirty to me. A new mastering would help a song like this one shine, since it has the sound of a big full production. Wah Wah guitar in the L/R. Nice Jazzy Sax. solo in the R/R. Vocals could be cleaner also IMO.
6: The Well Is Dry
- Another heavily produced song with lots of orchestration and vocals, horns and a full band sound. A great vocal performance by Levi Stubbs.
7: Tell Me You Love Me
- More of a Soul sound on this song with the sweeter vocals by Lawrence Payton and lots of light strings.
8: All My Love
- Starts with a more folk sounding acoustic guitar in the Front/Left, Congas in the Left/Rear, Horns & Electric guitar in the R/R. Vocals a little unfocused on this one mixed across the fronts with more of harmonies from the singers, a Sax. solo in the Front/Right.
9: I Found The Spirit
- Lush and funky tune with the vocals having a little more focused arrangement and mix. Electric Piano solo in the Left/Rear and that funky guitar in the Front/Right. At about 4:13 if you listen closely you can hear a drum fill mixed from about mid Left/Front to Phantom Center then back to the Left/Front speaker (may be wider than that also) very cool effect, and there could be more of these in the song and album that a closer listen would reveal as you get more familiar with the album.
10: Meeting Of The Minds
- Another good strong vocal performance by Levi Stubbs. Some light strings as a counterbalance with the heavy keyboard riff.

I found it interesting to learn that a lot of the arrangements were by Michael S. Omartian who I remember being associated with arranging, writing and playing piano with Loggins and Messina, Steely Dan, the We Are the World session and others and went on to become an accomplished producer also.

Not sure how much of the playing was performed by "The Funk Brothers" on this album, but they do show up on quite a few of The Four Tops songs as well as many other recordings. And another great Docu./Show was this one which I also recommend highly.

It's a real crime that this has not received any re-issuing and mastering since the early 70's as far as I know. Just because it's a Soul/R&B/Funk album doesn't mean it doesn't deserve an updated good remastering any less than a Jazz or Classical album. Could be they're tragically no longer available, see steelydave's original post above about that.

The Four Tops* - Meeting Of The Minds

Discover releases, reviews, credits, songs, and more about The Four Tops* - Meeting Of The Minds at Discogs. Complete your The Four Tops* collection.

I do know that the more I become familiar with the album with repeated listening, the more I like it.
Someone in that Hitsville: The Making of Motown movie says - "Levi Stubbs was no joke" and I'll never forget that because now I understand it and embrace his legacy and the music of a great band, The Four Tops!