Soundtrack to the film Three Tough Guys, which also starred Hayes himself alongside Fred Williamson and Lino Ventura, Tough Guys was released in quad alongside its stereo counterpart in March 1974 to coincide with the release of the film.

I think the film must've originally been called "Two Tough Guys" because the lyrics explicitly refer to only Williamson and Ventura's characters:

Preacher man, policeman, working together
Both can fight, black and white, and they're tough guys
They're your friends through thick and thin cause they're good guys
Make them mad and then you have two tough guys

So it's Hayes that's the third "Tough Guy" - either his screen presence was better than anticipated, or they wanted to cash in on his name following the massive success of the Shaft film and soundtrack, but at some point after he recorded this song about "two tough guys" the film became Three Tough Guys and the soundtrack LP became Tough Guys.

As with the other Stax/Enterprise quad releases, the quad LP version of this release was just in a stereo sleeve that had a big red 'SQ' sticker with the new catalog number applied to the front and spine of the jacket, and the quad 8-track release came in a standard Stax cardboard slipcase, sometimes with a 'QUADRAPHONIC' sticker affixed to the top, and sometimes not. 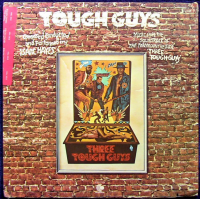 Side One
Side Two