How does it feel to be a 汚い犬, Pupster?

My package still hasn't shipped since the 17th. No explanation from Zenmarket on website or my message. Bought a DTS ES concert to hold me over.
waiting for Pandora's box and some other 5.1 mixes.

~~~ ~~~~ ~~~~~ so I guess DHL thought my package needed a trip around the world; uhm DHL you're going in the wrong direction 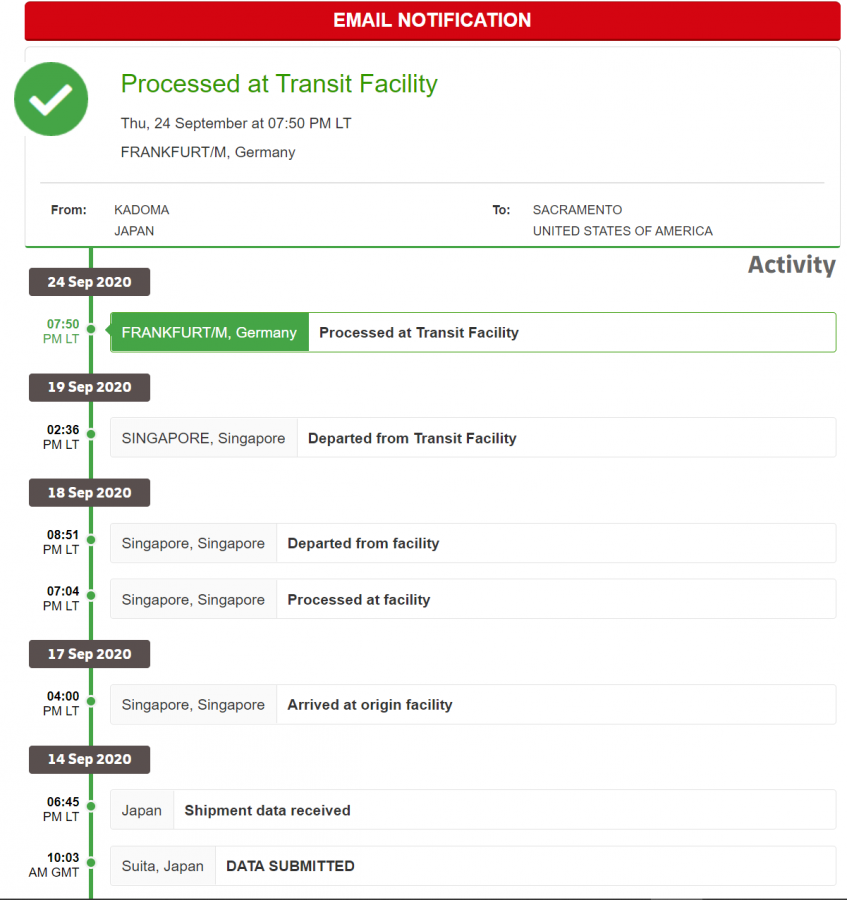 But Pupster the Japanese drive on the other side of the road.
What did you expect?

J. PUPSTER said:
~~~ ~~~~ ~~~~~ so I guess DHL thought my package needed a trip around the world; uhm DHL you're going in the wrong direction

Did you ever get a 2nd copy? Or just pay for it?
J

Since Japan is 17 hours ahead of us when your package arrives it will be yesterday.
You are already ahead.

jefe1 said:
But since Japan is 17 hours ahead of us when your package arrives it will be yesterday.
You are already ahead.
Click to expand...

My home page is Japan Today. So I can see what is going to happen.

Sonik Wiz said:
Did you ever get a 2nd copy? Or just pay for it?
Click to expand...

That is it, on vacation, around the world... cheese crackers and a drink? Tray upright and secure please sir!

J. PUPSTER said:
That is it, on vacation, around the world... cheese crackers and a drink? Tray upright and secure please sir!
Click to expand...

I hope Hiromi appreciates what you've done for her.

Sonik Wiz said:
I hope Hiromi appreciates what you've done for her.
Click to expand...

I put all the blame on Dave.

J. PUPSTER said:
I put all the blame on Dave.
Click to expand...

I got my package. Haven't tried it yet though.

So I sat down for my third listen to this album with notepad open intending to do a brief track-by-track rundown of the quad mix, but after about the 4th track I gave up because (aside from givens like lead vocals, bass guitar and drums in the front channels) literally every track is mixed differently - this is about as far as you can get from a "set it and forget it" mix, and the results are so good that I just wanted to enjoy it again, rather than have to worry about taking notes.

I think @J. PUPSTER 's description of the album as "pop funk with orchestration" is a good one, but I think the scope of the album is actually a little broader than that suggest. Broadly speaking, album is stylistically split - half of the albums is really up-tempo songs, and I can hear a lot of influence from bands like Abba, and the Bee Gees, Donna Summer, and even a bit of the disco side of Philadelphia soul, like Jackie Moore. The second half of the album contains most of the mellower tunes - there aren't any outright ballads, but the songs are a bit more intimate, ranging from slow/jam quiet storm territory ("Conversation"), to light pop-disco (track 8 "My Memories are in September"). If you're looking for more familiar comparables, track 9 ("Mr. Puzzle") has a bit of a Captain & Tennille Love Will Keep Us Together chunky clavinet/catchy vocal melody vibe (not to mention some nice pedal steel playing, of all things), and a couple of the other downtempo tracks remind me a bit at times of the feel of Nicolette Larson's Lotta Love.

I wasn't really familiar with any of the musicians on the album (aside from Ryuichi Sakamoto, who plays keyboards on some of the tracks) but man, the musicianship on this album is absolutely top notch - this doesn't sound like Japanese musicians imitating Western music, and I think you'd be hard-pressed to identify it as such in a blind listening test if it were entirely instrumental. There are some great Larry Carlton-esque ES-335 guitar leads, most notably on the title track, which has a really cool Rhodes electric piano-driven samba groove, and the following track, Contrast, boasts a great synth solo in the middle and some neat synth colourations throughout.

When I first discovered this SACD online, my expectations were very low - honestly I thought it was just going to be a curiosity, a bit like the Kimiko Kasai quads, which to me sound like interminable off-key wailing on top of half decent backing tracks. This is an entirely different beast altogether - the songwriting is strong, the arrangements are interesting, but most importantly, Hiromi Iwasaki is (to my Western ear) a more than capable vocalist. If I was going to draw a comparison, it might be to Diana Ross - in technical terms, maybe not gifted with the largest range, or most powerful voice, but someone who knows how to make the most of what they have, and how to do it with style. Also, massive shout out to whoever did the backing vocal arrangements - they're so flawlessly executed, and so lushly recorded that at times, you feel like you're bathing in them, especially in the quad mix when they're often positioned exclusively in the rear speakers.

And that quad mix, wow, what a stunner. This might be one of the most perfectly executed quad mixes ever done, anywhere - everything perfectly balanced, never a lead vocal or solo instrument struggling to be heard, and as I mentioned earlier, the mix varies so much from song to song that you're constantly surprised by something appearing somewhere in the surround spectrum that you weren't anticipating. It also features 4 or 5 songs with two drummers discretely mixed with one in the front and one in the back. I know it's sort of an apples and oranges comparison, but I'd happily put this mix up against any modern 5.1 remix for sound quality and mixing aggressiveness - I honestly don't think you'd be able to tell this was a vintage quad aside from the fact that it doesn't have a dedicated center channel. I did suffer from a bit of cognitive dissonance listening to it the first couple of times though - because I so strongly associate quad mixes with the music of the first half of the '70s, it felt weird to hear one that featured songs that were very much in the style of the last few years of the decade.

The only quibble I have with this disc is that it's mastered a little bit bright and (quite) bass shy. I'm not normally one who has to adjust levels on my AVR when I'm listening to something, but to fully enjoy this I had to crank up my sub (I think it was by about +6 or +7dB) and turn the treble down by -1dB just to take the edge off the hi-hats and vocal sibilance. Once I did that though, it really shined - sometimes when you crank up the bass on an album that doesn't have much, the result can be a hollow muddy mess, but that isn't the case here. The bass is really tight and well defined, and the bass drum has a satisfying thump to it.

So yeah, really enjoying this one, far more than I expected to, and it's actually growing on me the more I listen to it, so I anticipate more listens in the future. With the caveat that about 90-95% of the vocals are in Japanese, I can highly recommend this one. Obviously it's pretty pricey, so you might want to audition it first before you go seeking it out - the entire album is on YouTube if you want to do so, however.
You must log in or register to reply here.
Share:
Facebook Twitter Reddit Pinterest Tumblr WhatsApp Email Link