Released in August 1972, Guess Who was another single-inventory QS LP, and King's second LP of the year after L.A. Midnight. Notable session musicians contributing to the record include drummer Bernard Purdie and rhythm guitarist Cornell Dupree. 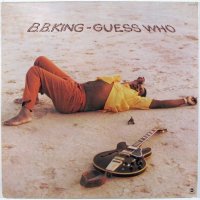 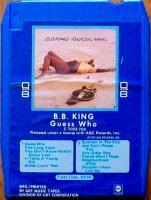 Oh crap, two of my favorite guys on this, and didn't even know -Purdie and Dupree (also Sanborn on Sax.)

I've got to hear this one!
Thanks Dave, will review as soon as am able.

J. PUPSTER said:
Oh crap, two of my favorite guys on this, and didn't even know -Purdie and Dupree (also Sanborn on Sax.)

I've got to hear this one!
Thanks Dave, will review as soon as am able.
Click to expand...

the QS decoded quite well iirc

I just tried my copy for the first time in a while and I have to agree - much more interesting quad mix than L.A. Midnight. B.B. and his guitar are centered upfront with a bit of echo in the back, and a couple of the songs appear to have piano and horns isolated in the rears. I'd love to get my hands on the Q8 and compare.

sjcorne said:
I just tried my copy for the first time in a while and I have to agree - much more interesting quad mix than L.A. Midnight. B.B. and his guitar are centered upfront with a bit of echo in the back, and a couple of the songs appear to have piano and horns isolated in the rears. I'd love to get my hands on the Q8 and compare.
Click to expand...

The LPs aren't labeled as Quad, is that right (stereo but Single-Inventory with decode to Quad?)

J. PUPSTER said:
The LPs aren't labeled as Quad, is that right (stereo but Single-Inventory with decode to Quad?)
Click to expand...

All versions of the album (LP, CD, etc) are QS-encoded. The back cover has a small blurb mentioning that it's quad, but doesn't say which matrix they used.

this new QQ Poll is very timely as i hadn't played this in quite a while (thank you for going back Jack and doing it again steelydave) and it turns out this was just the musical tonic i needed right now.

the mix doesn't do anything in the way of pyrotechnics but the U.S. "ABCX" Compatible Quadraphonic LP decodes into convincing surround sound through the Surround Master (QS) and the album is a delight; funkily effortlessly bluesily fab.

placeholder "8" carries its weight, could well nudge to a "9" in time

Much thanks to ABB for a fine QS LP conversion for me to review.
This is the first time hearing this album, but wanted to do a B.B. King review as I believe he's been neglected here on the forum and especially in the Polls. After all, he's arguably the greatest Blues guitar player ever, influencing just about every guitarist who's played (at least the Blues!)

Some of these tracks have a fairly soft presence to them compared to other tracks on the album. It's not about dynamics in the song craft IMO, but perhaps could have been mixed a little more consistently overall.

*A little side story: My wife saw B.B. King in the 70's in a Junior College Gym and thought it was fantastic; always wondered how he managed to take such a large band on the road to these kind of gigs and make much money on it. The man obviously "Lived" The Blues!

A1- Summer in the City:
This is mostly front channel action with some very soft piano in the rears; and therefore one of my least liked songs/mixes on the album.

A2- Just Can't Please You:
Piano picks up a little stronger in the R/R & Horns come out in Rears better. You can start to hear the guitar comping of Dupree in the R/R more prominently.

A3- Any Other Way:
Starts off with B.B.'s guitar in all channels and later on switches to R/R and then more to the F/R (seemed odd to move him around like this within a song), with the left channels a little soft overall. You get a little more Dupree in the R/R again. Later in the song, the bevy of horn players come into the rears with a short blast from Sanborn in the R/R (if you know his style he's very recognizable.) I count about 12 horn players on this album, lots of horns which I like.

A4- You Don't Know Nothin' About Love:
Nice snare drum in the beginning hit me in a favorable way. Nice smooth female back-up singers on this one. B.B.'s vocals just seem too faint and far off in the mix on this for me. Later in the song B.B.'s guitar comes in and cuts through everything which is refreshing.

A5- Found What I Need:
This track has a much better, punchier sound on it, with some Piano in Rears, but mostly Fronts are active.

A6- Neighborhood Affair:
Solo piano opens in rears with a lot of Horns also later. Sanborn shows up a little in the R/R as well as Dupree. I guess these guys were used primarily as equals to the rest of the band, rather than star sit ins, as they weren't really given much room to open up and shine. Given the time period that would make sense actually.

B1- It Takes A Young Girl:
More of that sweet B.B. King guitar soloing in this track; and I like his vocal performance here also.
Horns are prominently in the R/R.

B2- Better Lovin' Man:
One of my favorite tracks on the album, with a strong B.B. guitar in the front phantom center; and Horns blasting in the rears. Everything was poppin' here and seems to have a great strong presence on this track. Dupree's guitar again speaks out of the R/R well also.
As far as the style of this song; I can hear a lot of what the younger Blues guitar slinger "Robert Cray" has picked up into his style from this track.

B3- Guess Who:
Not much to say on this one except I liked the string arrangement on this song.

B4- Shouldn't Have Left Me:
The bass guitar has a certain bouncy riff in the fronts on this one that really spoke to me and kept the song moving along with a steady motion.
The Horns are spread nicely across the rears, and I like the horn arrangement.

B5- Five Long Years:
This is a cover of the old Eddie Boyd classic tune. Eric Clapton did another strong take on this song years later on his "From The Cradle" album, which is a must have if you're into the Blues IMO.
Dupree comes out to play some more in the R/R (seems like his spot) and some Piano tinkling in the L/R. This time Sanborn shows up in the L/R which is a nice change of pace.
Overall I'd give this one top marks as one the best mixed songs on the album.

For me ,side two is just a much stronger side for both tunes, mix and proper presence.