King Records in Japan was a major distributor for a lot of US labels that did quad, including A&M, ABC and United Artists amongst others. Interestingly they released quad reels of some titles that either weren't released in quad at all elsewhere, or not on quad reel at the very least.

What's really interesting to me is that Mark Anderson's quad discography only lists 4 of these releases, and they're not numbered consecutively This leads me to believe there may be more undiscovered quad reels out there, because the numbering system of these reels doesn't correspond to the catalog numbers of the quad vinyl releases of these titles that King put out, but they do appear to be numbered consecutively (ie 5, 6, 10 and 15) indicating that we're only seeing 4 of what might be at least 15 releases. I hate to spread rumours but I've heard rumblings that King Records Japan did quad reels of 1 or more titles from Quincy Jones and/or Rick Wakeman.

These are the titles in Mark's quad discography:


Titles known to exist (see posts below) but no catalog #s


Does anyone know if there are any more in this series? Was a list of releases ever printed anywhere? These reels seem to be as rare as hen's teeth - of the 4 listed above I know know that the B.B. King and Carpenters ones exist for sure, as I've never seen or heard the other two.
Last edited: Oct 23, 2015

Contact and communication with a Japanese quad fan and collector must be made in order to discern what came out on reels and the catalog system. Surprising that there have not been any members from Japan here on the QQ forums.

But I would guess that the tapes from King Records were and are stored carefully and are in good order, likely not returned to the US but remain in Japan.

Lots of great quad tapes are spread out all over the world. And with such a small market for new releases means that even phone calls to these distant countries is beyond what anyone wants to do.

I think a conversion floats around of a Carpenters - Singles reel conversion, and I've seen a Quincy Jones - You've Got It Bad Girl reel.

There's also a conversion of Wilson Pickett "Live in Japan" floating out there, which I believe was from a King Records Q4.

I agree it's a shame that we don't have any Japanese members here at QQ - there are so many mysteries about the quad stuff that came out of Japan and this is definitely one of the most intriguing. Having QQ 'boots on the ground' there would be a massive help. I'm hoping that by posting this it'll act like a sort of 'Google trap' in the forthcoming years, that someone searching for any of those catalog numbers might stumble upon this thread and provide more information.

AoQ: You're right about The Carpenters Singles album, it does circulate as a conversion but unfortunately there doesn't seem to be any information about the catalog number associated with it - it would be nice to see where it sits in that sequence of numbers. Where did you see the Quincy Jones reel? You've Got It Bad Girl is a great album and obviously a conversion of a QR would be most welcome, but I suppose that goes without saying.

Zabble: from what I gathered from a quick google, the Wilson Pickett conversion that circulates is from a CD-4 LP. As far as I know RCA distributed their own records in Japan so none of their releases would have been distributed via King. I'm not sure if RCA actually released any quad reels in Japan, but they did release lots of stuff on CD-4 records that weren't released in that format elsewhere, including some Guess Who albums, and some Japan-only CD-4's like the aformentioned Wilson Pickett title and also a Harry Belafonte Live In Japan double LP.


I went through Mark Anderson's quad discography and compiled a list of their CD-4 and QS releases, because I thought it might give some clues as to what might be in the missing series of King quad reels. I think one thing that's interesting is there seems to be no uniformity in the numbering between the albums that were released on more than one format - for example B.B. King 'Live In Japan' is #10 in the QR series but #8 in the QS LP series, The Carpenters 'Now And Then' is #15 in the QR series and #1 in the CD-4 LP series, and so on. The same goes for titles that were released by King in both CD-4 and QS, the release numbers don't correspond.

Obviously lots of these titles were released on QR by their respective labels in the US, but there are also plenty that weren't...the remaining A&M titles are especially tantalising. I'd personally happily pay a handsome sum for a QR of Quincy Jones 'Body Heat' if it exists!

steelydave said:
.......AoQ: You're right about The Carpenters Singles album, it does circulate as a conversion but unfortunately there doesn't seem to be any information about the catalog number associated with it - it would be nice to see where it sits in that sequence of numbers. .......
Click to expand...

I had a copy of that reel and posted scans in the forum. You can review it here:

Were they left at Ampex or Bell and Howell duplication services, and then dumped?

One day soon, a commercial SACD release is going to be using a Q4 like this Carpenters diamond in the haystack as it's master.

But for all the quad formats being released around the world back 1973-1976, where are even the production masters if not the original mixdowns? They gotta be in some of the tape libraries at record companies around the world like King.

I had a copy of that reel and posted scans in the forum. You can review it here:

Not only did I see it I apparently even replied to it in early 2014, which I clearly had no recollection of when I made this newer post. Interesting to see in those pictures that the reel is marked '4CHA (R) 15' and the back of the box is marked '4CHA (M) 15' - I wonder if one of them is in error or if the box and reel carry seperate catalog numbers. My assumption based on the few known titles listed in my initial post was that the bracketed letter indicated the original record company - (A) for ABC, (M) for A&M, (P) for Project 3 and so on.

Photos were too small to see the catalog number. The Vanguard didn't seems to be a King release.

Excellent digging winopener - I did some searching for that Takashi Sagai title and it turns out it was issued on quad reel on Vanguard in the US as well, although it doesn't appear in Mark Anderson's quad discography. The image I found is somewhat small, but it looks like the catalog number is either VSS 20 or VSS 28.

I'm going to amend my initial post to include the other titles that have been shown to exist, even though we don't know the catalog numbers for them (yet) - thanks Jon, AoQ, winopener, etc. Hopefully more information will come to light going forward!

Ok, so also the Vanguard sampler is a King release. The blue box got me off...

I'm pretty sure The Beatles were on Toshiba-EMI, but I didn't know the White Album came out in quad. I wonder if it's a real quad mix, or just something electronically enhanced to simulate quad (like with Mantovani).

Those are not all quad reels, nor all on King. The White album is on Apple Records and in stereo, but a Japanese set on reels is rare and tres expensive. I can only see two quads in the pile.

There's three quads, as winopener said. The Vanguard Surround Sampler (row 2, tape 3) is hard to detect as a King quad release but if you look closely the box has a blue border with gold-coloured writing that says '4 Channel' just like the two other quad reels (row 3, tapes 1 & 2) with the light brown bordered boxes.

Here's one for you. Nothing to get excited about, but it is a Japan-issue quad reel.

steelydave said:
Excellent digging winopener - I did some searching for that Takashi Sagai title and it turns out it was issued on quad reel on Vanguard in the US as well, although it doesn't appear in Mark Anderson's quad discography. The image I found is somewhat small, but it looks like the catalog number is either VSS 20 or VSS 28.

I'm going to amend my initial post to include the other titles that have been shown to exist, even though we don't know the catalog numbers for them (yet) - thanks Jon, AoQ, winopener, etc. Hopefully more information will come to light going forward!

The tape you are referring to is VSS 20.

I can add another confirmed tape to this series:

I cribbed the images from an eBay Buy It Now that just showed up - yours for the princely sum of $135.00 if you want it.

Finding another tape in this series just strengthens my belief that there are at least 15 tapes in this series (4CHA (M) 15 is the Carpenters Now & Then) - I'd really love to be able to fill in more of the blanks. It also seems to confirm my suspicion that the bracketed letter indicates the original record label, in this case (L) for London. 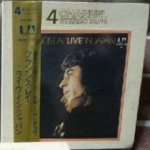 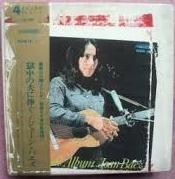