Recorded August 18th, 1973 in New York's Central Park, Between Nothingness & Eternity contains three original compositions (two by John McLaughlin and one by Jan Hammer) that were originally slated to be on a studio album by the band that year. When studio sessions recorded in London in July for that proposed album were scrapped after disagreements between McLaughlin and the other band members (I believe McLaughlin wanted to augment the basic tracks with either strings or horns, like he did with later albums like Apocalypse and Visions of the Emerald Beyond), Between Nothingness & Eternity was released instead, in November 1973.

The acrimony that started with the July studio sessions (which would finally see release in 1999 as The Lost Trident Sessions) marked the beginning of the end of the original lineup that included Hammer, Billy Cobham and by the end of 1973 it was no more. McLaughlin would regroup in early 1974 with a new lineup that included violinist Jean-Luc Ponty, bassist Ralphe Armstrong, keyboardist Gayle Moran (later of Return to Forever), and drummer Narada Michael Walden - but Between Nothingness & Eternity remains a fitting testament to the fire and power of the original lineup. 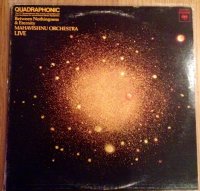 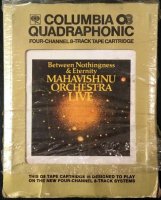 Going with a “10”. This is one of my favorite jazz fusion surround releases, and one of the best surround mixes of live material I've ever heard. Perhaps it was because of the rules of mixing for SQ, but Tim Geelan did not go for “band in the front, audience in the back” approach. Billy Cobham’s drum kit is spread across the front channels, John McLaughlin’s guitar is centered upfront, Jerry Goodman’s violin is in the left rear, and Jan Hammer’s synth is in the right rear. The audience is heard in both rear channels. I wish they would’ve mixed the Birds Of Fire studio LP with the same layout.

I’m not sure this album would’ve kept my attention in stereo, but in quad it’s entertaining and engaging. I love the effect of the solos alternating in a triangle around the listener. What’s not to like about being transported on stage with some of the best fusion players of all time at the top of their game?

My only issue with the recording--and this is not limited to the quad mix--is that the sound can be a bit murky at times, and during some of the heavier moments you can hear an occasional bit of distortion. I guess whatever equipment was used couldn’t quite capture the sheer intensity of this performance.

The other problem is that some of the mixing decisions don't carry over well on the SQ LP - Cobham's stereo-panned drum kit seems emanate all around you instead of in front of you, and the bit of drum echo in the rears is lost entirely. I also found the LP to be pressed rather loud and bright. The Q8, on the other hand, is one of the best-sounding tapes in my collection. 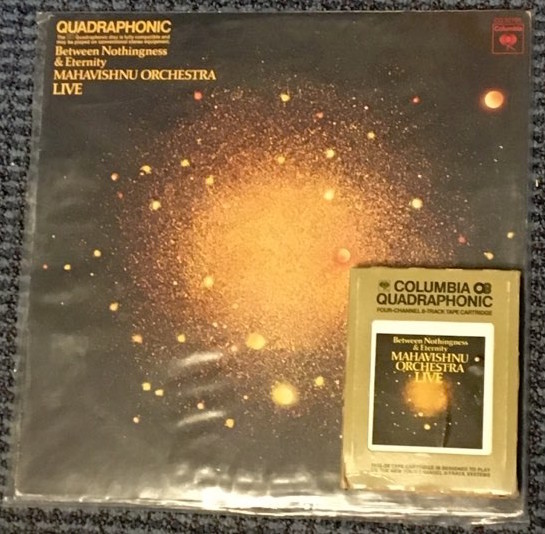 I've heard an excellent SQ decode and a pretty good Q8 conversion of this album, and I second everything @sjcorne said. I'd only dock a point for the material, which doesn't thrill me like Birds of Fire, and another for the murky sound, which weirdly affects McLaughlin's guitar and Goodman's violin more than Hammer's Moog--although I'm willing to hear that some of that is just down to the pedals they were using. Old dilemma: the LP sounds better, but the Q8's mix is better--fabulous, in fact. Waddya gonna do? Kick-ass performances in any case.

Are multis of the "Unreleased Tracks" sitting in a vault somewhere, waiting to be mixed into quad?
Last edited: May 28, 2020

Fortunate enough to have heard an excellent Q8 conversion of this great album, I can only hope for an eventual Dutton-Vocalion release in the future.

For me at least, this quad mix rectifies everything I found wrong with the Birds Of Fire mixing faux pas while putting to rest the notion that live albums can’t kick ass in surround. McLaughlin and his ferocious guitar man the front stage along with the Cobham/Laird rhythm section. Yes, Billy’s drums are too buried in the mix for my tastes, but the total effect yields an almost Cream-like power trio feel that’s fantastic to behold.

Isolating Hammer and Goodman to the right and left surrounds respectively is a simple but genius way to allow the listener insight to who’s doing what in revealing 3-D fashion. It’s exhilarating to follow the flying solos around the room knowing there are plenty more to come. McLaughlin, Hammer, and Goodman all approached their instruments as lead players and simply attacked their solos. Incredible stuff!