Please post your thoughts and comments on this 2014 Blu-Ray Audio release of the album "Aelita" by Mando Diao. 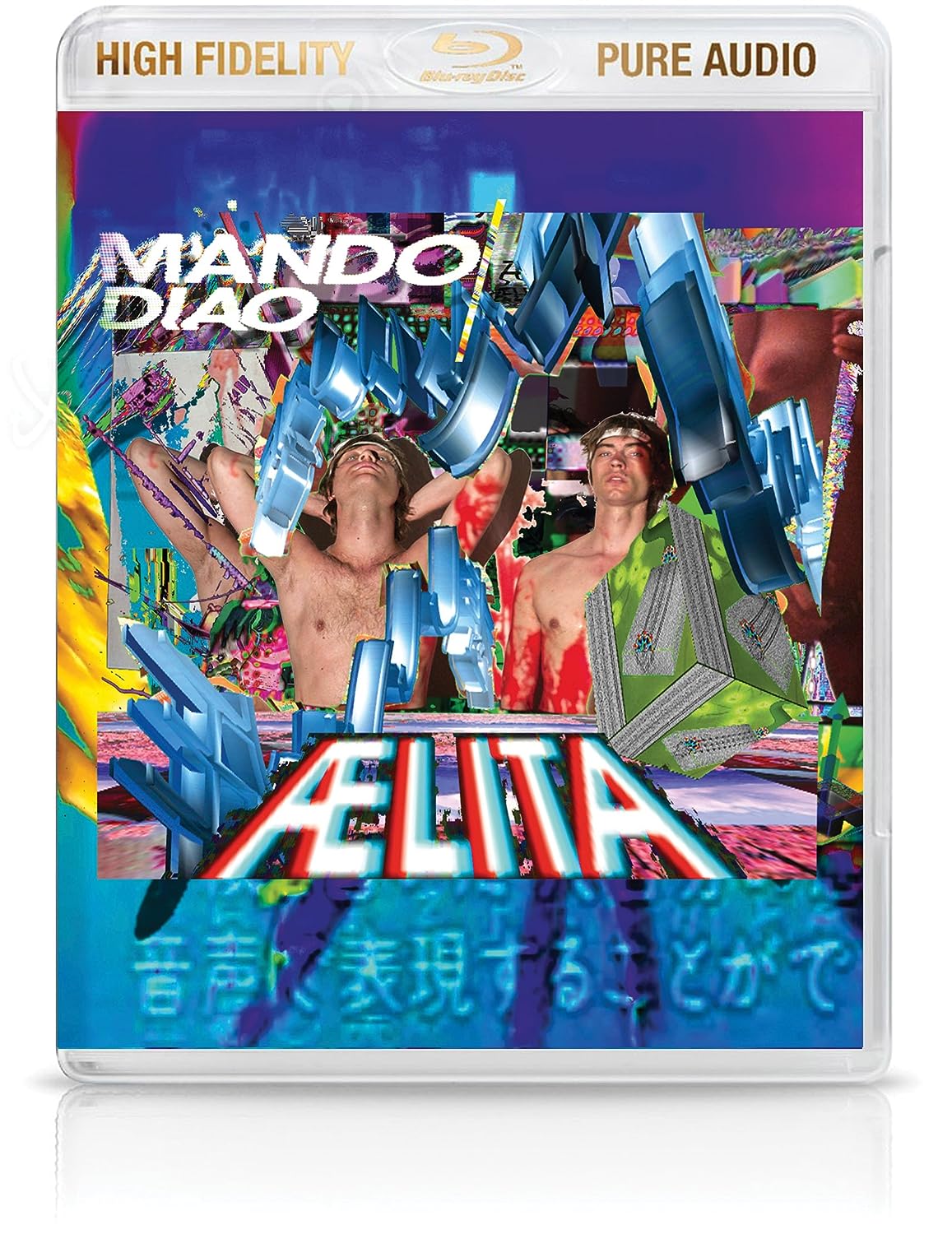 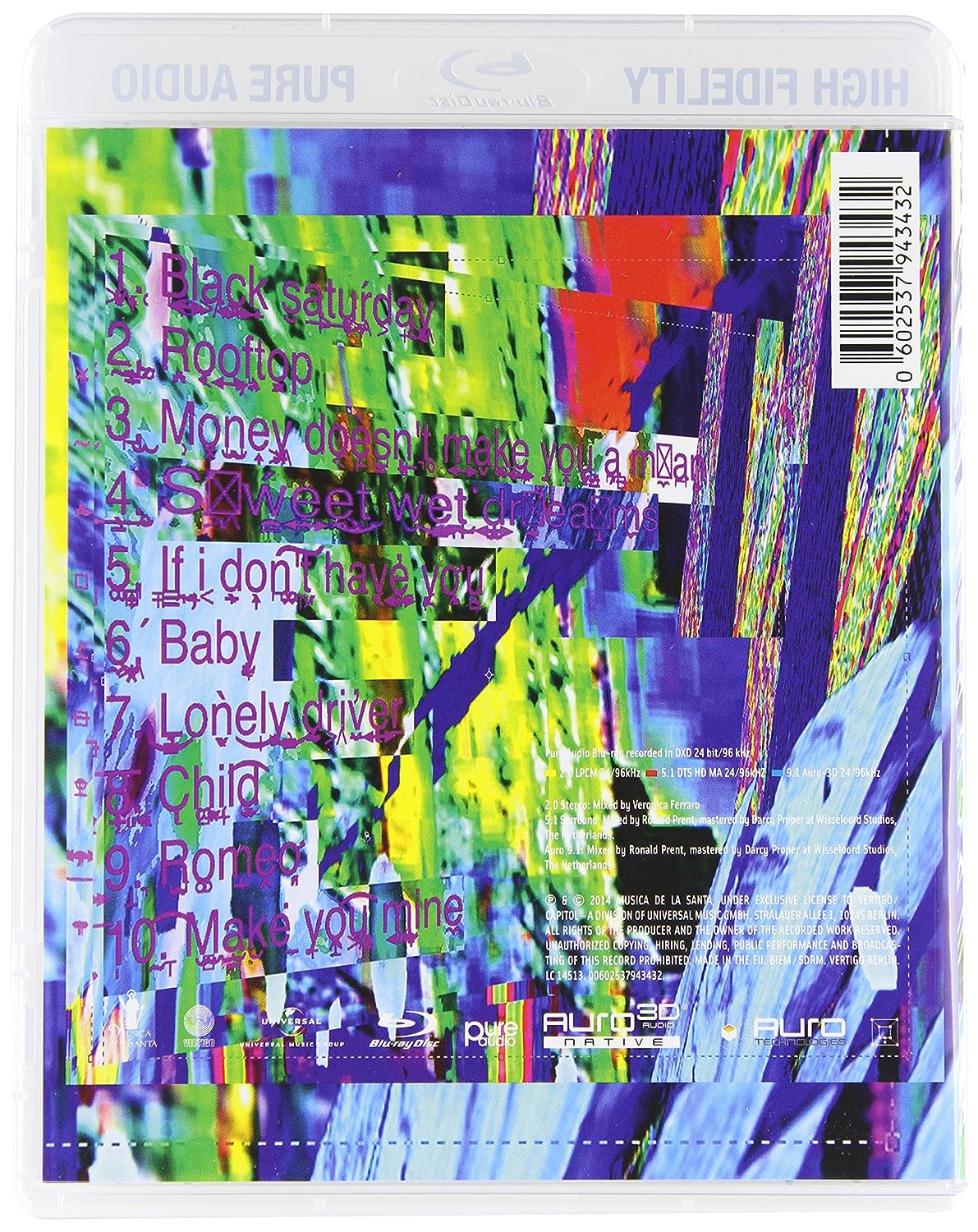 Ah, cool. Glad to see an Auro-3D title get a highlight.
I'll report back more when I can, but I like this and remember the Auro mix being very active.

I picked up this Blu-Ray a few months back based on several members’ recommendations and still have it in fairly regular rotation. It’s just that good. The music, fidelity, and surround mix are all top-notch.

I’d never heard of the band or listened to any of their other albums, but this one sounds like an intentional homage to ‘80s bands like Depeche Mode and Simple Minds. It’s a strong listen from start-to-finish with lots of catchy hooks. Favorite tracks include “Black Saturday”, “Rooftop”, “Sweet Wet Dreams”, and “Child”.

Ronald Prent’s 5.1 mix is phenomenal! It's always active, engaging, and clever in using the extra channels to enhance the listening experience. “Black Saturday” kicks off with the main guitar riff suspended between the rear channels. “Rooftop” has a great front-to-back call & response effect with the string parts in the center channel and backing vocals in the rears. There’s a full ‘ round-the-room swirl halfway through “Sweet Wet Dreams” that gets me every time. The piercing synth comes blasting through the center channel towards the end of “If I Don’t Have You”. Layers of strings burst from the rears in "Child". I'd honestly put this up there with Scheiner, Wilson, and Clearmountain's best work.

The sound quality is excellent as well. Unlike the compressed stereo mix, the 5.1 comes across as punchy and dynamic without being fatiguing. The bass in particular is a standout: powerful, but never 'boomy' or muddy-sounding. In fact, the bass drop when the full band enters in “Child” is one of my favorite moments on the album.

Very good music, superb mixes, hot mastering but overall I recommend this. I do wish the DR had been 13 -15 range to leave some breathing space so I could crank this. Do not let the front cover fool you, this is pop music, not electronic dance. The vocals are great.

its one i've been singing the praises of since it first came out (is it really 6+ years ago? phew.. time flies when you're playing Quad!).. here's a trip down QQ memory lane wee thread

Well.. many of us here have been crying out for new music on Blu-ray Audio in surround.. and here is just such an example! Universal Germany just released this week (11/8) a new HFPA Blu-ray Pure Audio of Mando Diao's latest album "Aelita" (the regular release of which came out on CD as...
www.quadraphonicquad.com

northernsoul said:
I do wish the DR had been 13 -15 range to leave some breathing space so I could crank this.
Click to expand...

Normally I'd agree, but in this case the mastering treatment seems to fit the style of the album. The drums in the front channels are supposed to be hammering out loud, repetitive beats in the style of electronic music. The opening percussive drone to "Money Doesn't Make You A Man" should immediately jump out at the listener rather than start off quiet and get louder. I think the whole thing would've lost power, intensity, and overall drive if they made it too dynamic. It's all a matter of opinion, I suppose.

Kal Rubinson said:
Gave it away.
Click to expand...

I guess the style of music is at issue here?

I do have to say, I don't know if Kal intends on being humorous, but I'm literally in tears from laughter over this post! Nice.

On a serious note Kal, do you have any knowledge you can share about @bmoura, some of us here are concerned?

I need to revisit this one before I actually cast a vote, but this and Opeth's Pale Communion (despite being polar opposites, musically) were my two favourite "under the radar" 5.1 releases of 2014.

Stylistically, this actually reminds me a bit of an updated version of Billy Idol's 80's sound, especially on tracks like Black Saturday - a hybrid of pop/rock songwriting and instrumentation with dance/electronic production. Overall I really like the album, but there are a couple of songs I have to skip (Sweet Wet Dreams is one of them) because the nightclub d-bag vibe (think Will Ferrell and Chris Kattan's characters in A Night at the Roxbury) is too strong for me, so I can't quite give it a 10, but your mileage may vary on this. For me, the highlight of the album is Lonely Driver, a soulful ballad based on just two chords that reminds me a lot of The Spinners' I'll Be Around.

Mix-wise, as previously stated, it's excellent - I've only heard it in standard 5.1, so I'd be curious to hear what it does in Auro 9.1. Ronald Prent is an interesting guy, he seems to be like the Dutch version of Bob Clearmountain, mixing all his projects in both stereo and surround simultaneously (I dug up a bunch more of these for the mch engineers thread, posts #221 and #225) and based on this one, I hope he sees more of these mixes released.

Regarding the DR, for me it's more than sufficient - the stereo version is in the DR5-DR6 range (awful, but standard for modern music in this style) and the surround mix is double that, clocking in at DR10-DR11. In the same way that limiter distortion was an integral part of Motown's 60's sound (especially on vocals), compression is part of the "sound" of this kind of music - it's an artistic choice, rather than simply a mastering engineer run amok. At the very least, there definitely isn't any brickwall limiting on this album - the individual tracks all peak at different levels, and none of them are zero. It's possible that the surround mix wasn't mastered at all, and that the compression is extant within the mix itself.

J. PUPSTER said:
I guess the style of music is at issue here?
Click to expand...

On a serious note Kal, do you have any knowledge you can share about @bmoura, some of us here are concerned?
Click to expand...

I don't have Auro 3D but I've managed to get a conversion done to Atmos and it sounds great! Really discrete up top - lots of stuff going on. Might be moving away from the spirit of the original but it's unlikely I'll have a Auro 3D system anytime soon. The 5.1 is also absolutely superb.

I can't remember when I got this (it might've been last year or the one before?!). I'm pretty sure it was on Amazon marketplace. Anyway, the reason I say that is it's quite easy for it to go under the radar - but I'd defo recommend it.

In Auro-3D it sounds really fantastic !!

I've had this one for awhile (just bumped into this thread). It's probably the main album that kept me looking for more like it. 1980s Billy Idol is EXACTLY what I thought when I first heard Black Saturday on the Auro-3D Volume 2 sampler disc and then bought the album (I like Billy Idol, especially his much maligned, but brilliant concept album known as Cyberpunk that I regularly listen to all the way through, which has Q-Sound like effects in it, making it sound like a quad album a times).

Unfortunately, Aelita doesn't sound as much like Billy Idol on the rest of the album, although the sound quality and surround use is top notch (My system is fully Auro 10.1 compatible a well as Atmos at 11.1.6).

One other disappointment is that the Auro demo disc has the full music video (which quite frankly is freaking awesome with these unbelievably cool trucks that light up like Japanese pachinko machines while the Bluray is a boring as hell "Pure Audio" style disc (don't know that It's actually that brand) with nothing but track numbers to show (god Pure Audio discs are usually overpriced when they don't even include slide shows like DVD-Audio did). They could gave at least thrown in the Black Saturday video for those that don't already have it.

Steven Wilsons The Future Bites is annoying with ultra-white backgrounds that make my eyes want to bleed, but at least it's not 100% blank and costs half the price of a typical Pure Audio disc..., but I digress.

I had never previously heard of Mando Diao, but I gather this album is an outlier for them as their earlier material is often compared more with The Beatles than Billy Idol. I think one of the founding members has left the group as well since then.

There was some other interesting artists in the Auro demo discs that apparently never got a full album in Auro-3D (Jennifer Batten comes to mind as her guitar in Auro was awesome).

Anyone got an extra copy of this one or know where I might be able to find it? I'm on the prowl for PureAudio and Auro3D titles and this thing is just *poof* gone from everywhere; I procrastinated too long. Just throwing out a Hail Mary in case.
You must log in or register to reply here.
Share:
Facebook Twitter Reddit Pinterest Tumblr WhatsApp Email Link