HomerJAU said:
No unfortunately. They are now saying it will be for Kodi 20.

I‘ve been listening to my Abbey Road 7.1 FLAC mix. Since adding my new amps I’ve removed my BD player from my rack so no Atmos Abbey Road can be played here now.
Click to expand...

It’s prob more down to an authorising problem... There really can’t be any extra audio info in there?! If there’s a way of using an an Atmos renderer to downsample then it might be solvable someday too...

MrSmithers said:
There really can’t be any extra audio info in there?
Click to expand...

Its about double the normal Atmos bitrate. Apparently the TrueHD is packed differently for high bitrate and Kodi (and other players) doesn‘t unpack it correctly so there’s missing bits in the stream sent via HDMI for Atmos decoding. I’ve only heard this issue on Abbey Road.

Every other Atmos mix plays correctly, and I’ve heard a few dozen including most Atmos BDAs and many Atmos movies. I think this is why it hasn’t been fixed in Kodi yet, as it’s only affecting a small user group with Abbey Road.

Hmm since I made the update to Kodi 19 I won’t seem to get any of the skins to work, it won’t let me update either (it’s Aeon Nox silvo 7.0.9 btw, says it’s not compatible with this version). Do I have to clear everything and install from fresh maybe? Very weird.

I have Aeon Nox Silvo on my two Kodi 19 installs. Maybe uninstall the current version then reinstall from the Kodi Repository?

Aye I will try that, I am still using Nvidia Shield, and since the original skin is working properly I doubt it’s the media player.

I tried install direct from repository but I got this message:

Rich (BB code):
When I look it up it seems that the skin author might not have updated the skin fully (in this case an android based player). I will search around some more. No problem running the regular skin and playback.

edit: a second full install from repository and now everything seems to work.
Last edited: Mar 23, 2021

Just in case anyone else has a similar setup to me (Intel NUC 7i5BNH running Windows 10) I had to change some audio output settings to get Dolby Digital/DTS passthrough to work properly after the upgrade to Kodi 19.

With v18, I was using DirectSound as my audio output device, with 'Number of channels' as 7.1. In v19, DirectSound doesn't seem to work at all (I just get silence for the first 20 seconds of playback, and then the playback gets 'stuck' there) so I switched to WASAPI which sort of worked, but I was still getting intermittent dropouts with DD & DTS tracks, for a second or two every minute. After a lot of googling, I found someone on some other message board complaining of a similar issue and said that switching the 'Number of channels' to 5.1 seems to remedy the problem.

I haven't done extensive testing, but this seems to have worked for me and pass-through is working properly, even with Atmos content, which is obviously greater than 5.1 channels.

HomerJAU said:
Now that I have some web storage I'll post more and eventually do a tutorial to help users set up a Kodi based media player for MCH music
Click to expand...

So Kodi 19.2 has been released. An install on my firestick shows no apparent change from 19.1. The biggest issue for me is still no option for automatic full screen playback for music. It could be an Aeon NOX Silvo skin issue, but I was hoping they would address this.

There’s a new setting in Kodi Settings for Music Playback in full screen.. It was added in 19.1 I think, maybe 19.0.

Here is the new Kodi 19 Setting to play music in full screen, in Media Settings: 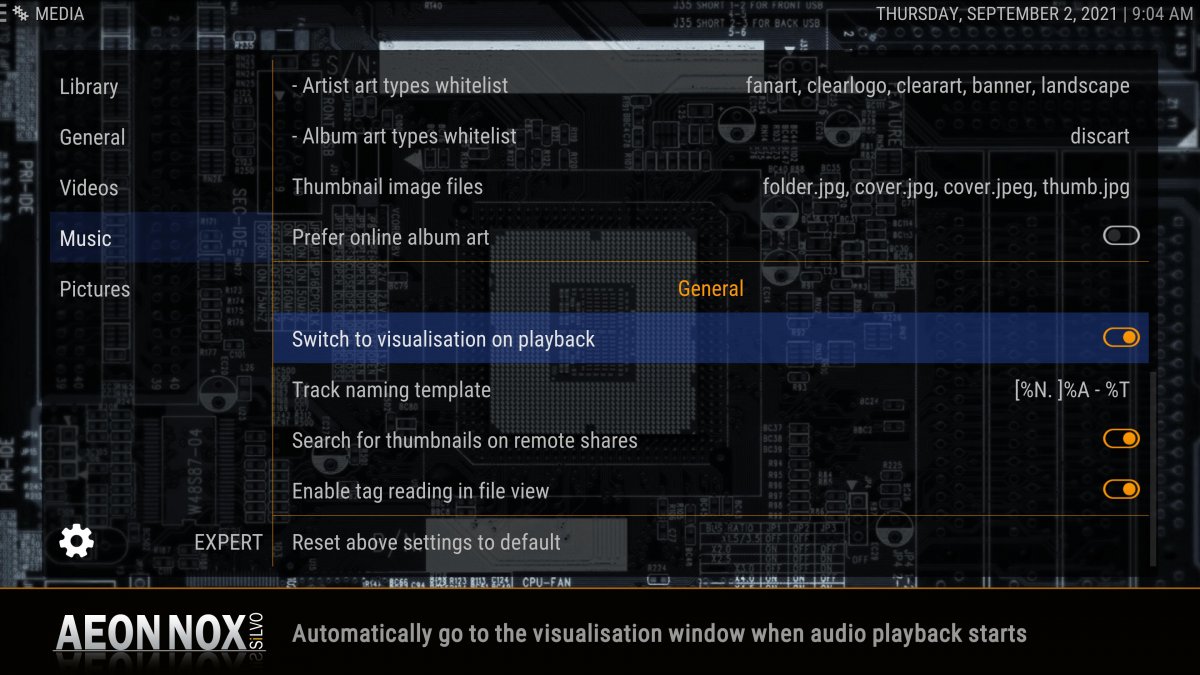 For those using Kodi on Windows there’s finally a fix for Atmos skipping on some titles (Abbey Road is the only one for me). Here’s an official pre-release build including the fix for current Kodi 19.2:

This fix will be available in next Kodi for all platforms, Kodi 19.3
R

HomerJAU said:
For those using Kodi on Windows there’s finally a fix for Atmos skipping on some titles (Abbey Road is the only one for me). Here’s an official pre-release build including the fix for current Kodi 19.2:

This fix will be available in next Kodi for all platforms, Kodi 19.3
Click to expand...

On the Kodi forum, one of the developers posted today 19.3 will be released in next few days. This will include the Atmos high bitrate fix.

HomerJAU said:
On the Kodi forum, one of the developers posted today 19.3 will be released in next few days. This will include the Atmos high bitrate fix.
Click to expand...

dabl said:
Awesome news because unsurprisingly the 'Let It Be' Atmos mix has the same problem in the current Kodi
Click to expand...