Please post your thoughts and comments on this 2019 reissue on Multichannel SACD from Dutton Vocalion of the classic MFSB album "Philadelphia Freedom".
This Multichannel SACD release contains the original 1970s Quadraphonic mix, available commercially for the first time in over 40 years!

NOTE: The SACD also contains the album "Summertime" in stereo. 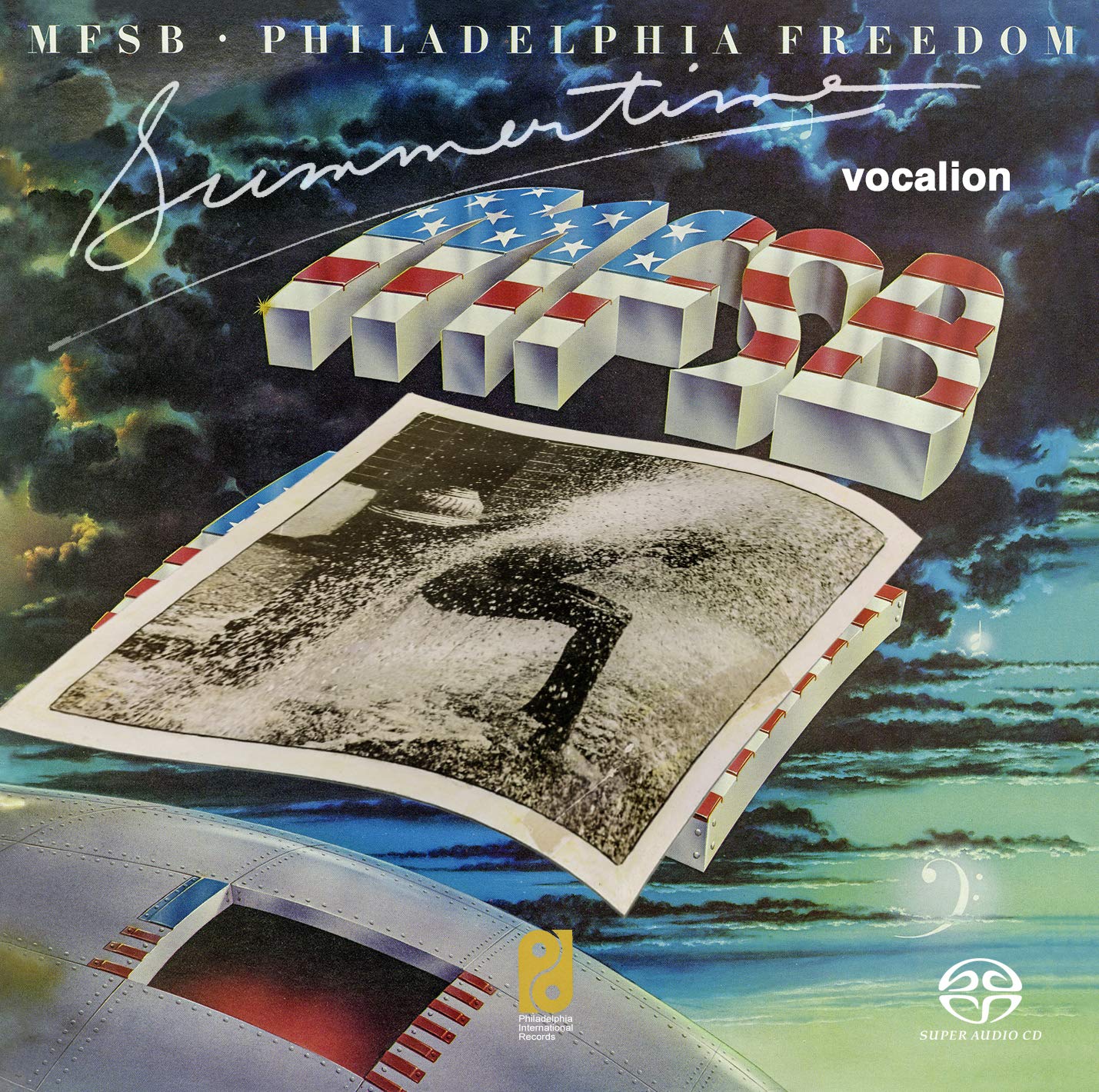 Another faultless remaster from Mike Dutton. I haven't heard the SQ LP of this one, but I think it’s safe to say it wouldn’t come close to this level of separation and detail. The phantom center channel imaging is particularly astonishing: there are moments on this disc where I could’ve sworn that the sax was coming entirely from my center speaker.

The quad mix is very discrete - as you’d expect for a CBS title - but also quite a bit less ‘showy’ than some of the other Philly Int’l quads. It's usually a pretty static presentation: most of the lead instruments (drums, bass, sax, some horn parts) are in the fronts, while the rears are used to add percussion, rhythm guitar, strings, and backing vocals. The one exception is, of course, "The Zip", which has the backing vocals flying all over the place. There are passages where the rears will go completely silent, then suddenly burst back in at full volume as the arrangements gain complexity. I actually like this quad mix better than that of MFSB’s Love Is The Message.

The stereo remaster of Summertime also sounds great, and it separates nicely into faux quad through my Tate decoder.

I suppose you could quibble about some of the content (admittedly, I didn’t love every track) - but to me, the perfect fidelity and quad mix merit nothing less than a 10.

There’s seven more PIR quads that have yet to be reissued digitally (three of which were only released as SQ LPs), and they’re all top-notch. I hope to see them all out and sounding this good someday soon

"Get Down With The Philly Sound":

i guess dreams really can come true!
what was easily one of my most played old Quad LPs (and while the SQ LP decoded well through the Surround Master, in all fairness its always going to be limited by the SQ system) the new SACD is on another level. i loved the Quad so much i went through three copies of the SQ LP (including the ultra-rare Israeli SQ Quadra pressing) and continued to enjoy it even though all the LPs had their issues (without boring you with all the details) two LPs were pressed off-centre pretty badly, strings and horns "wowed" throughout; not ideal on a horn and string-laden album and even the still-sealed copy of the SQ Quad LP i picked up more recently was "still crazy after all these cleans" through my cleaning machine.. but hey presto, here we go and an almighty "alakazam!" for the Wonderful Wizard Of Watford once again waves his magic wand and one spanky new SACD makes all the old LPs totally obsolete. ok the LPs rather lovely to look at and the artwork may be a tad diminished when scaled down to CD jewel case size but to me that's a minor gripe, it's this shiny wee SACD i'll be spinning from now on.

the sound quality is absolutely superb (and the Quad mix comes across even better in discrete surround, for the first time) there are some great liner notes and it is just my cuppa musical tea and so i have no hesitation in awarding it a perfect QQ "10".

(and i haven't even played the "Summertime" album in Stereo yet! woo! roll on Summer!

Freddie, you are making it difficult for me to wait for payday! I am soo looking forward to hearing MFSB in quad on SACD. The other 3 titles are gonna be bought too. I am glad to hear you say they sound so good. Oh well, only 48 hours to go. Lets hope there is still stock when I go to order.

Agree with all the comments before obvious 10. Please DV release Universal Love and TSOP as a 2 fer

Good mix, good music, good fidelity, totally discrete - since that was released as a SQ-only quad - so what's not to like?
IMHO it's not the best MFSB title but very enjoyable all round. Solid 9.
Me too hope to see all the P.I.R. quads in D-V sacd, i love to make redundant my old conversion, especially starting with the SQ-only releases such as this one... wake up, everybody! (hint, hint).

I think the sales or marketing (or whatever you want to call it) strategy at CBS for quad changed in 1975.

I was listening to one of those WNYC Men of Hi-Fi programs from early 1976 that had an interview with Stanley Kavan who worked for CBS, and one of the first things he said (and I'm paraphrasing here) was that "1975 was a tough year for quad". I think once the excitement of the new format wore off, people became more selective about what they were buying, and as a result CBS became a bit more selective about what they were issuing.

From 1972 to 1974 I think pretty much everything they issued on SQ LP they also issued on Q8, but in 1975 you start to see some SQ LP-only quad releases from them, and they're almost all R&B titles - this MFSB one, The O'Jays' Family Reunion and Survival, Phoebe Snow's Second Childhood, the Isley's Harvest for the World, Johnnie Taylor's Eargasm, etc. Record labels don't do things for no reason, so my guess is they probably sold considerably fewer Q8 copies than LP copies of soul, funk and R&B albums in the years before 1975, so when the belt-tightening came in '75 it seems like they were the first casualty.

I bet it was also significantly more expensive to dump unsold Q8's than LPs - with LPs they could melt down and reuse the vinyl, but you can't do the same with magnetic tape. I've also noticed (and many other people have pointed this out too) that the CBS SQ vinyl pressings in the later years of quad (especially '76/'77) are really poor, like maybe they were skimping on quality there just to get them out - I don't think a good sounding copy of Billy Joel's Turnstiles (1976) or the Isley's Go for Your Guns (1977) exists for example, they all either have horrible inner groove distortion, are pressed off-center, or both.

Good explanation. The R&B factor in the SQ-only is a excellent pointer.

winopener said:
Good explanation. The R&B factor in the SQ-only is a excellent pointer.
Click to expand...

i don't think its totally black and white because CBS continued to produce both Q8s and SQ LPs in '76 & '77 but not for all titles.

..and right when that was all happening you suddenly get the SQ-only release of B.T. Express' Energy To Burn.. yes it's R&B but still there was quite a bit of R&B on Q8 after that, iirc all CBS' R&B Quads in '77 saw Q8 release (i think Harold Melvin's Wake Up Everybody just sneaked in as a 1976 release in December?)

anyway.. this MFSB Quad was SQ-only and now it's not! yippee!!

Relaxing with my pup, listening to the Philadelphia Sound.
Very cool stuff.
Interestingly, because tracks 12 - 19 are only available in stereo, I only see 11 tracks when I fire this up (SACD MC default).
Hard to know if I'll ever spin Summertime!
Still an awesome value.

We need scores of 11 now, to really justify our gratitude to Mr Dutton.

Finally listened to this one. Wow! Just killer fidelity and Quad. I certainly did not know that this SACD has Summertime only in stereo...bummer. I sure like the 2'fers in Quad.

edisonbaggins said:
Relaxing with my pup, listening to the Philadelphia Sound.
Very cool stuff.
Interestingly, because tracks 12 - 19 are only available in stereo, I only see 11 tracks when I fire this up (SACD MC default).
Hard to know if I'll ever spin Summertime!
Still an awesome value.
Click to expand...

GOS said:
Finally listened to this one. Wow! Just killer fidelity and Quad. I certainly did not know that this SACD has Summertime only in stereo...bummer. I sure like the 2'fers in Quad.

I love the music on Summertime just as much; had my feet tapping along the whole time, even if just stereo- there’s also this nice piece of gear called a Surround Master- maybe you’ve heard of it?

Of all the discs that D-V have done this year, this might be the one that has had the most repeat listens from me. I suppose it's a moot point if you don't like the music, but the quad mix is absolutely sublime - the two Dexter Wansel tracks are particular standouts. The sound quality is also phenomenal, the only previous digital versions of this album were over-compressed and sounded like they were mastered in a tin can - this SACD is the first time this album funks the way it's supposed to.

polmac said:
I hope someone can help, as I have a strange problem! I’ve just listened to Philadelphia Freedom on my Oppo, and it sounds amazing. However, I can’t find Summertime on the disc!
After track 11, it stops. I can’t fast forward or input tracks 12 onwards on my remote. I’ve pressed top menu and pop up menu on my remote, but nothing happens.
The menu on my tv shows disc title as Philadelphia Freedom & Summertime, but only shows 11 tracks.
I’m aware that Summertime is in stereo, but surely it would give me the option to play it?!
This is driving me a wee bit crazy...
Click to expand...

Goona said:
yes hit the audio button on the Oppo remote it will change to Stereo
Click to expand...

OK I guess that works too... Actually a much better solution than my suggestion.

Thanks folks, that’s appreciated. After posting, I changed the settings as subsequently suggested and the missing tracks appeared onscreen, but this seemed a bit of a faff. So the info about the audio button is very useful!
You must log in or register to reply here.
Share:
Facebook Twitter Reddit Pinterest Tumblr WhatsApp Email Link