ummagumma said:
Well the MFSL & UK SQ I have here are both very different mixes.

I haven't gone through exhaustively, but one obvious example is "us & them": the sax intro on the SQ version is longer, and the tape head delay panning on the vocals is different & more extreme than the MFSL.

Lots of other differences on instrument levels, reverb amount & panning on other tracks too, but clearly these were not sourced from the same stereo mix.

I played them both stereo, as the claim that MFSL is a stealth quad implies the stereo mix would be the same.

Unless there are multiple SQ surround mixes. Or the MFSL is the Japanese QS encode? The SQ liner notes say Alan Parsons supervised the quad mix.
Click to expand...

No just the one quad mix as far as I know , and I to have the UK SQ mix on vinyl, in fact 2 copies of that 1973 mix.
No doubt the Australian Pink vinyl SQ copy from the late 80's would and should be the same.

As to discrete copies ,we'll I don't have the Blu-ray of the quad mix ,but I do have one of the DVDA copies made available on line (free) ,supposedly from a Q4 master.
And that copy got a review in a respectable magazine ,(even though it was a boot) so go figure, a copy not sanctioned by the Band nor their label ?
I'm actually surprised you missed that one .
Hey ? It was free .....and the vast majority of QQ 'ers including non members could download it for the longest time I think. That link was not exclusive to any website in particular.
And although I could not download that DSOTM , a good friend made me a hard copy ,no charge of course.

Anyway here's a little bit more on DSOTM specifically the track "Money" ;
providing the ultimate quad test of any release .........interview with Alan via Guitar World magazine 1993
re mix ,Q AND A .
with 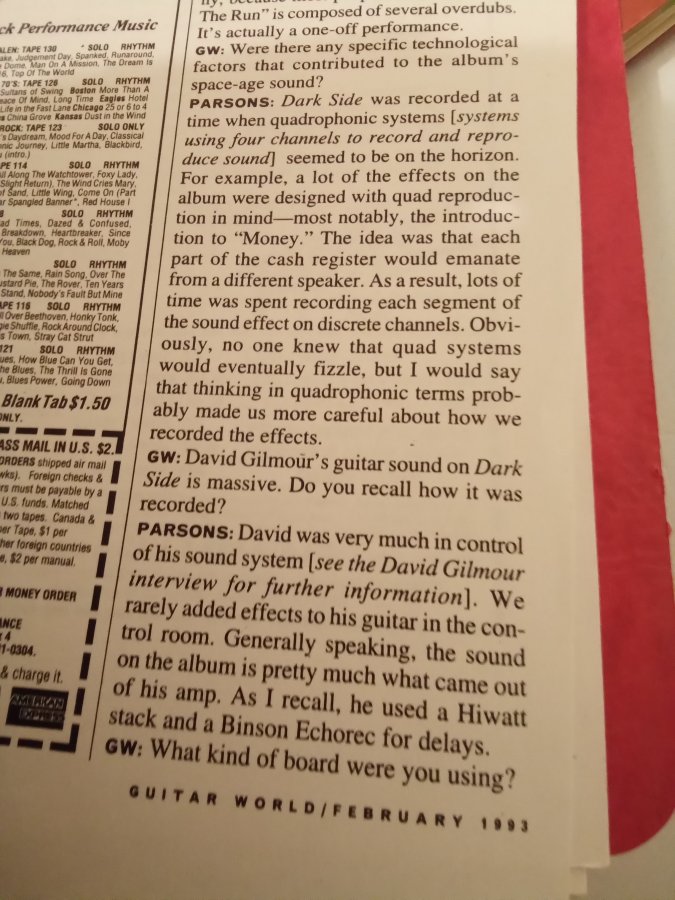 Well that interview has some interesting comments by Alan Parsons, so I thought I'd provide it completely in it's
Entirety! 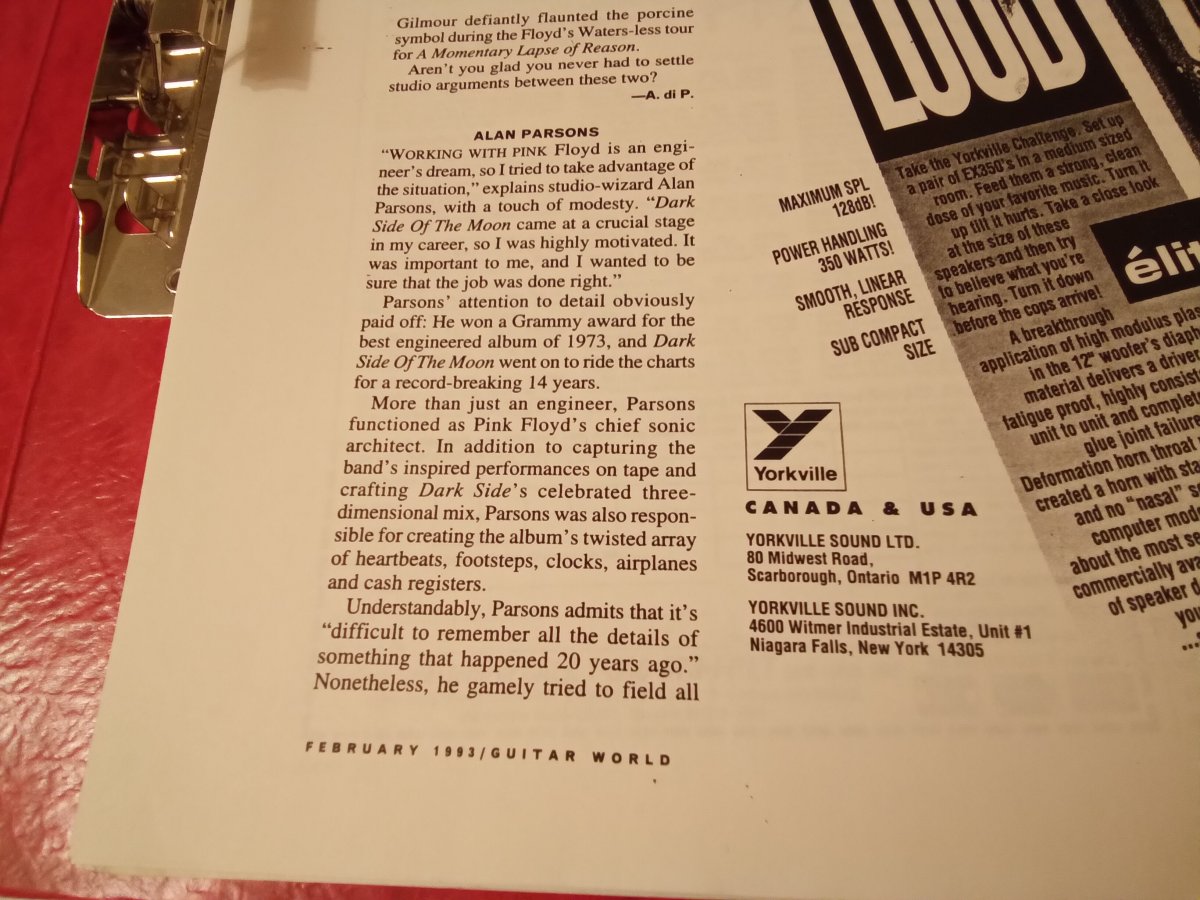 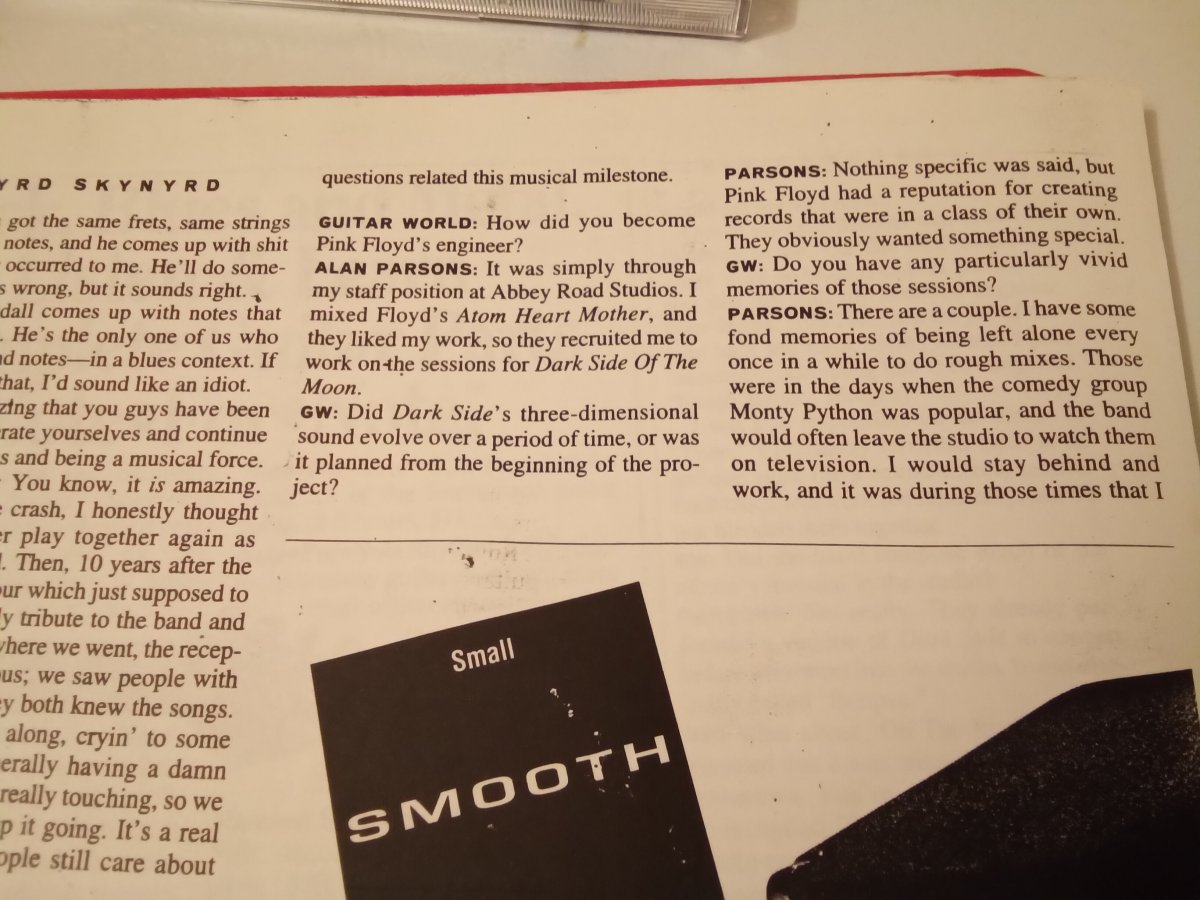 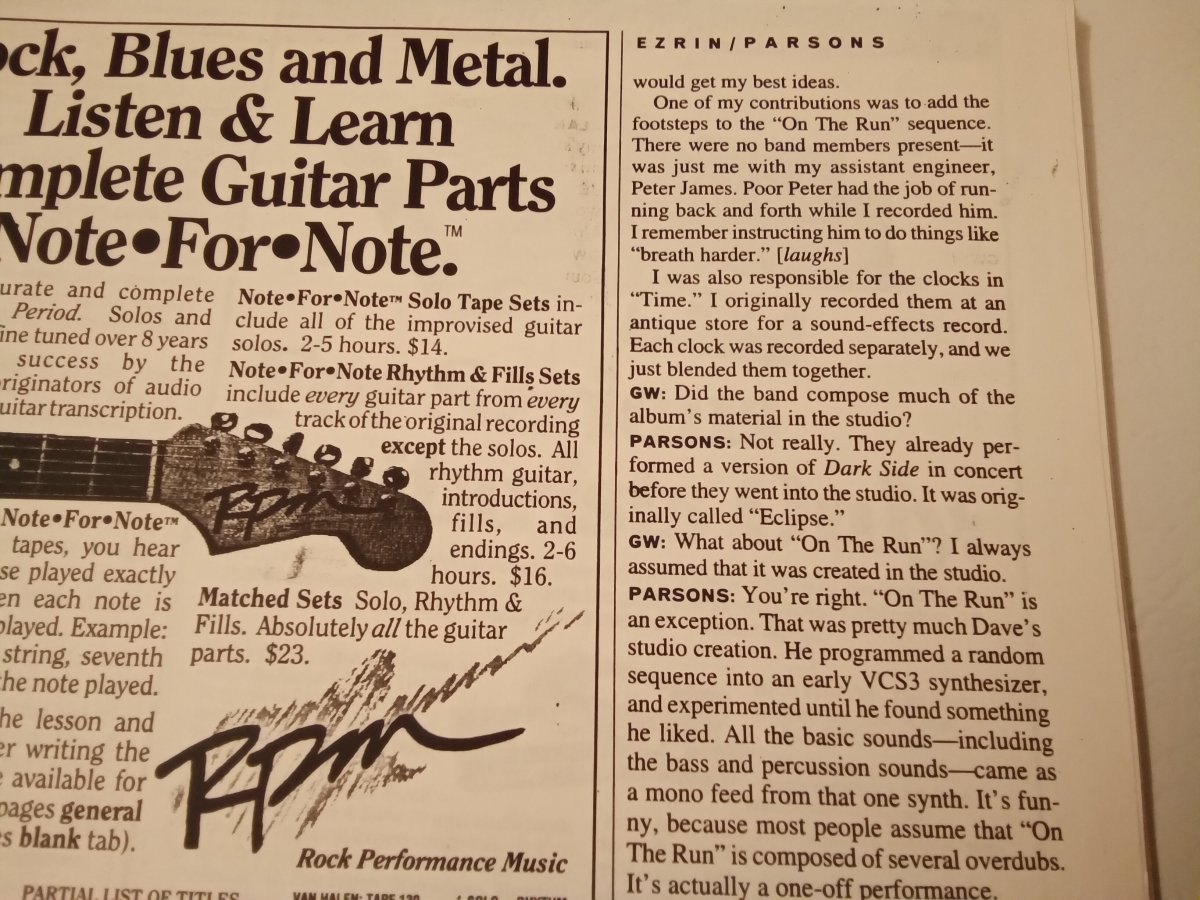 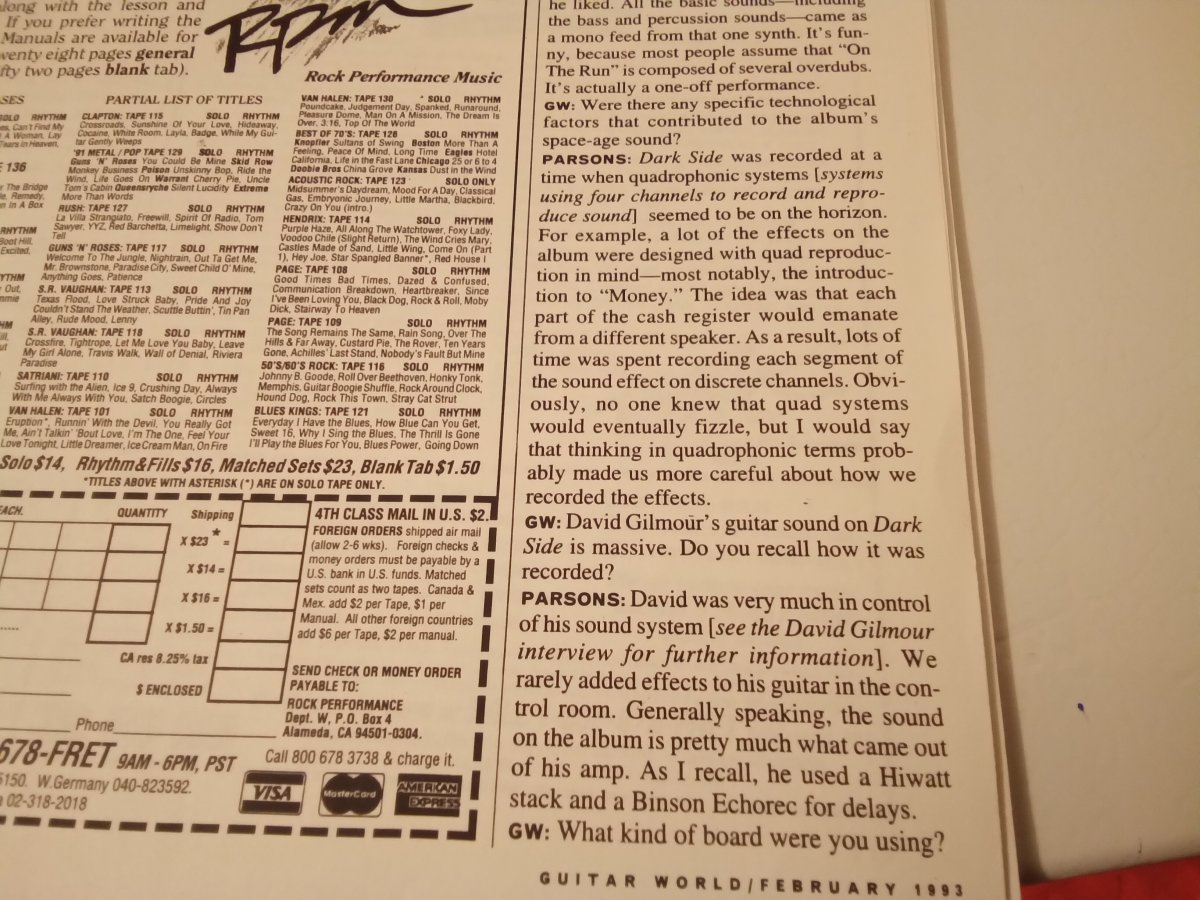 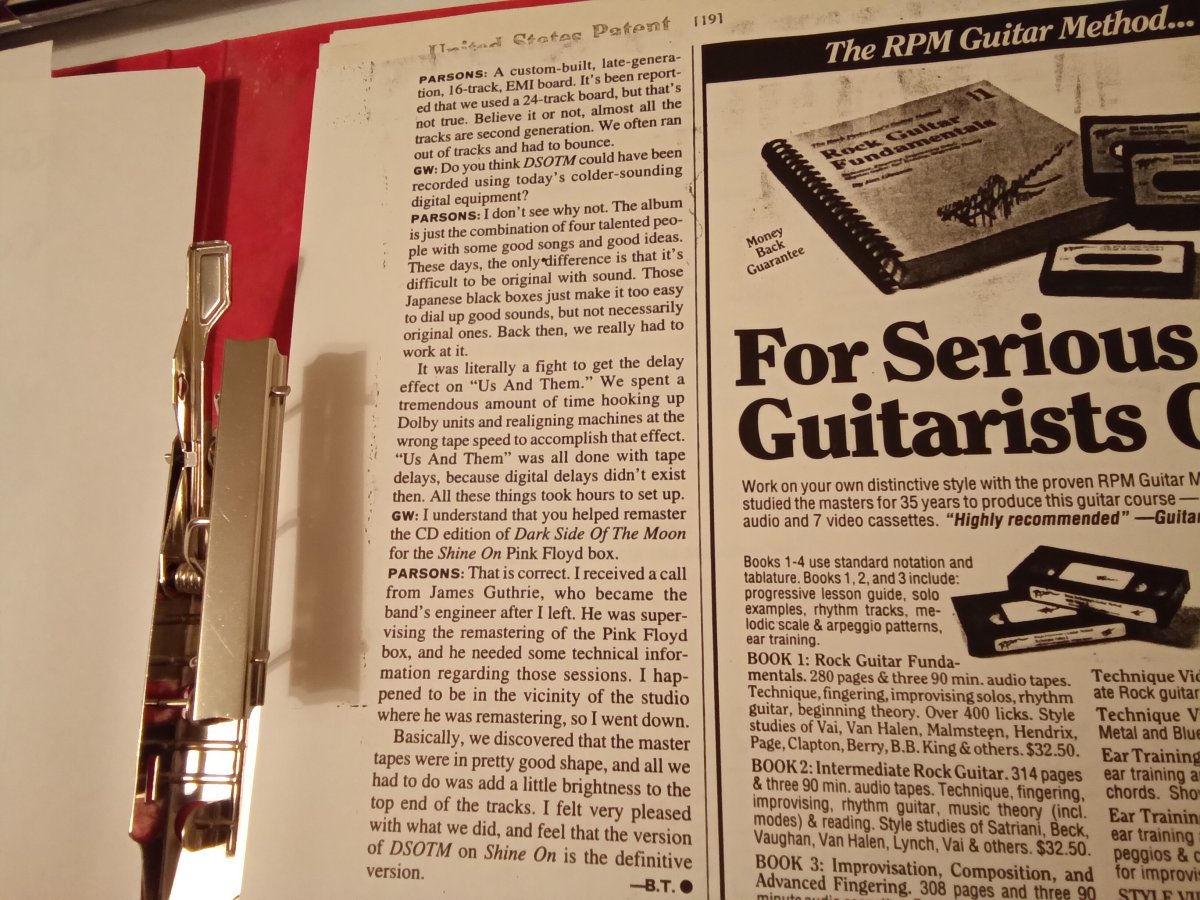 Also a tiny mention from Roger Waters on the last page or last comment ; 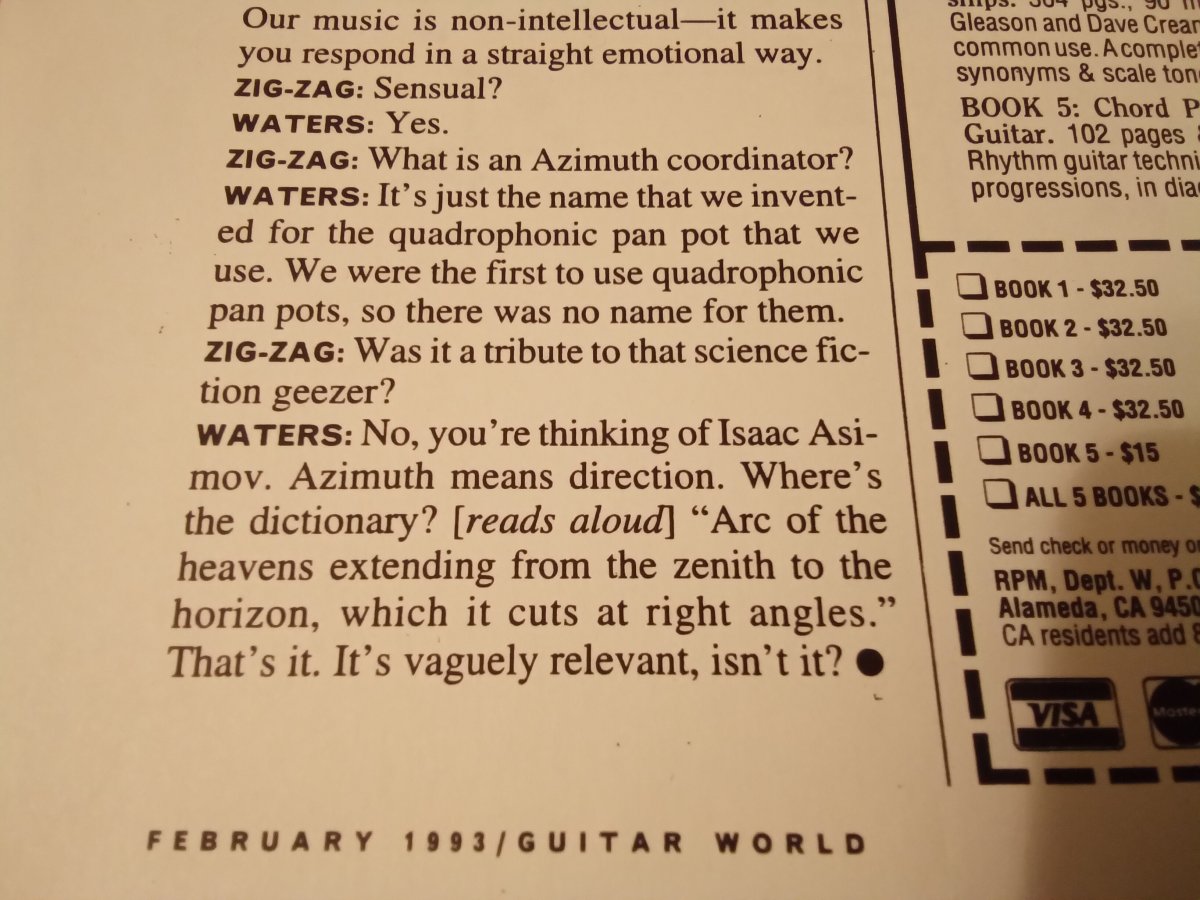 "That geezer who wrote the science fiction books" hilarious

BTW I think Isaac Asimov was one of the most brilliant minds we've been lucky to have contribute to civilization.

It's just humourous that the interviewer is so daft. Or maybe they're just having a laugh.
A

marcb said:
There is no evidence or logic to indicate DSOTM was originally a second quad mix and then folded to stereo. It is a dedicated stereo mix.
Click to expand...

My Google skills are failing me at the moment, but what's left of my brain is trying to tell me that the band wanted the press premiere of the album to be a quad mix but none was yet ready so they boycotted the event and were represented by cardboard cutouts.

Strange AP claims "on the run" was basically a live one-off performance by Gilmour, when we see footage of Waters recording overdub effects for it with the VCS3 in the Pompeii footage?

Someone on Wiki claims the album was already finished & the band did that footage just for show. But I can't see them hauling all that gear into Abbey Road to just fake a recording session. And Gilmour seems to be still working out ideas for the guitar parts too.

I recall reading the Pompeii footage was used in the legal battles to help prove Waters' contribution to the track. So I'm inclined to think the Pompeii footage is legit, and Waters was involved with writing "on the run". Or maybe AP meant to say Waters instead of Gilmour?
You must log in or register to reply here.
Share:
Facebook Twitter Reddit Pinterest Tumblr WhatsApp Email Link