I have just added a new tool for MMH that enables editing of channel volume (gain) for multiple files in batch:

This tool supports FLAC and WAV files: mono, stereo and multichannel (up to 8 channels). 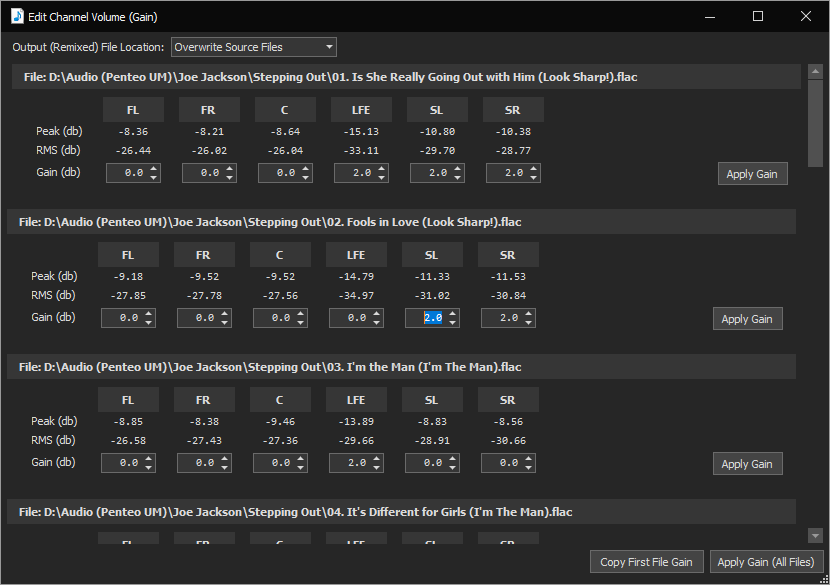 There is an option to either Overwrite the original file or to auto create an updated copy of the original in a sub-folder under each file's Source folder (any tagging is also copied).

I have also added an option to copy channel gains from the first file in the view to all others to make it easier to do things like apply same gain (volume) adjustments to all the surround channels or LFE etc.
Last edited: Jun 2, 2020

Interesting, so if I for instance have a release where the center is mixed very high, rather than adjusting my volume levels I can adjust just the volume on the track with MMH?
It’s tiresome to adjust the levels all the time depending on big mixing variations.
Last edited: Jun 2, 2020

Yes. You can use this new tool in MMH.

Select the album folder, MMH loads all the FLACs (every song in the album)

MMH updates all existing FLACs (or creates new FLACs with same file name and tags, depending on Output option) with Gain(s) applied to C channels (-3.0db)

Easy and a permanent volume change.

Thanks, will try this out.

One question, I have updated MMH and currently try out this tool, I get as far as adding the file and then try to do a manaul gain increse, but the bar below (greyed) only shows up briefly and then disappears, it does put put a new file but it is identical to the original file. Also I can't believe my old budget laptop is that quick (it's a mili second really). Small screen

Doesn’t matter if I try replacing existing file or new folder/file. Same result, a quick bar shows up after I click Apply Gain and then disappears, the result is identical as the old file, at least from what I can detect in Audacity and foobar.
Last edited: Jul 7, 2020

I’m wondering if it’s the Euro region decimal that’s the problem. Let me check that out today. It happened on another tool years ago. I forgot all about it. Apologies.

Fixed. It was the euro decimal point as a comma issue.

Existing MMH 3.x users will get a notification of an update to 4.0 using the old installer, future updates will use the new installer.

I've had a request from an MMH user to add 'Target' volumes to Music Media Helper's Volume (Gain) tool and I've just implemented something in the latest MMH 5 beta release.

This is the new Volume/gain editing dialog: 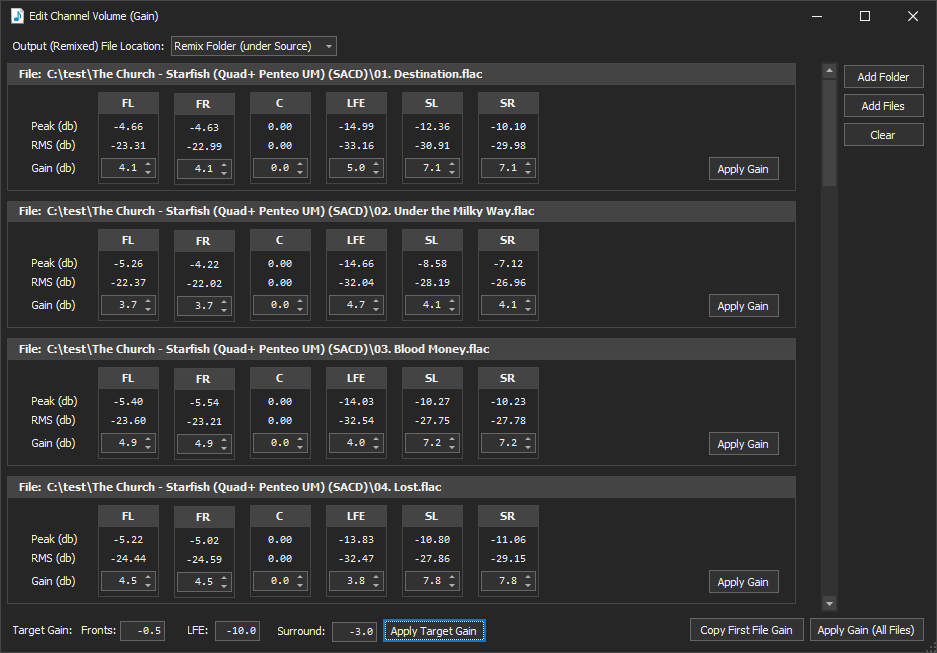 At the bottom left there are three new 'Target' inputs. Users can set a Target for Fronts, LFE and Rears.

Click the: 'Apply Target Gain' to get MMH to calculate the gain to apply to reach the Target gain.

NOTE: For Fronts and Rears MMH looks for the highest Peak value for all channels in each respective group and calculates new gain from the max peak to the Target entered. Then ALL channels in that group have same gain applied so as to keep current volume balance within that channel group.

See the above screen shot where Front Target -0.5db, LFE is -10db and Rears -3db. This screen shot shows the Gain values MMH calculated after clicking 'Apply Target gain' (that should be renamed 'Calculate target Gain' as it does not save the gain with that button... (it will change in official release).

You can get this MMH 5 beta with this new feature from link:
EDIT: MMH 5.0.4 now released

The next MMH 5 version Beta has been updated today (same link as previous post): 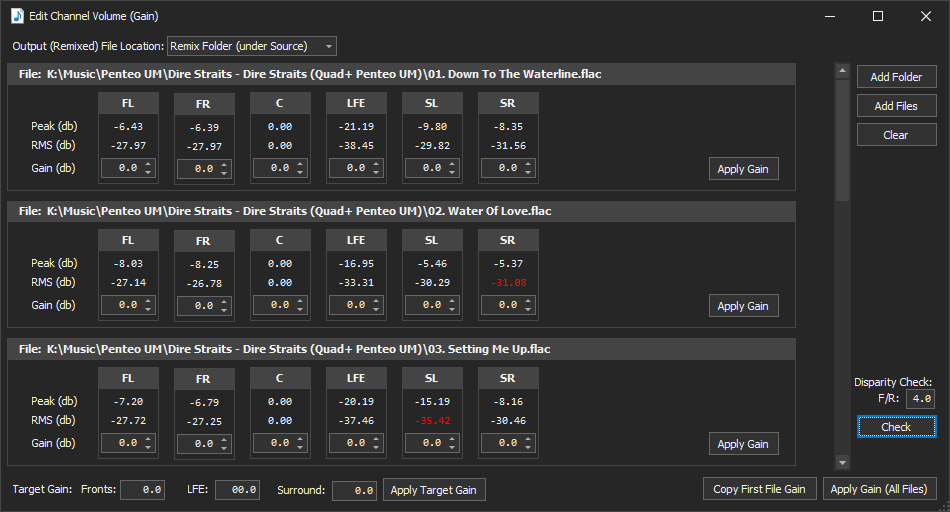 I added a new 'Disparity Check' to look at the differences in channel Volume (RMS) between fronts and rears - FL & SL and FR & SR.

I know many here like to set there surrounds 3db lower than fronts. This Check allows a user to enter any value from (0 to 9db) in the F/R numeric box and MMH will runs a quick check for all files loaded and highlight surround channels that have a disparity of greater than the entered value for each file (see red above).

Users can then apply channel gain as required. (I guess this tool could eventually fully automate this and just go ahead and apply gain as defined. Not just yet though...) 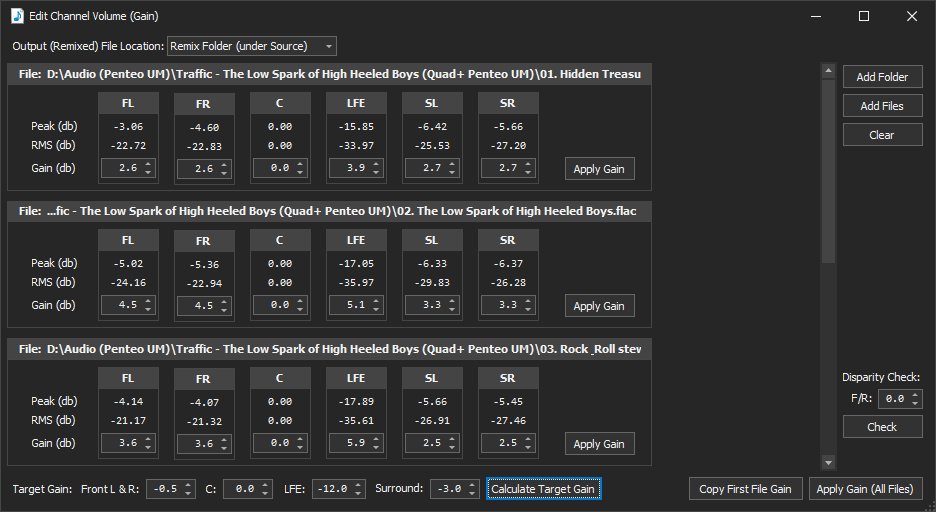 As I've implemented multi-threaded processing in this release, loading and updating volume for multiple files is now MUCH faster that previous versions.
Last edited: Jul 28, 2021

Awesome tool mate! Just one question. Can you encode to MLP? Not a biggie but it would help when creating DVD-A. Cheers.

Last time I tried encoding MLP with MMH it left a small click at regular intervals so I abandoned further work. I may try again at some stage. Short answer ‘No’.

BTW: I’m working on further improvements to the Channel Volume tool so should be one more ‘final’ version in next couple of days.

In the latest MMH version (5.0.5) just released the Channel Volume tool's 'Target Gain' calculation has been changed by user request to be similar to SpecWeb's ZAG where C, LFE and Surrounds gain is now calculated relative to the front channels. (originally this was released set to absolute values).

Here's an example to the latest version after relative Target Gains have been calculated: 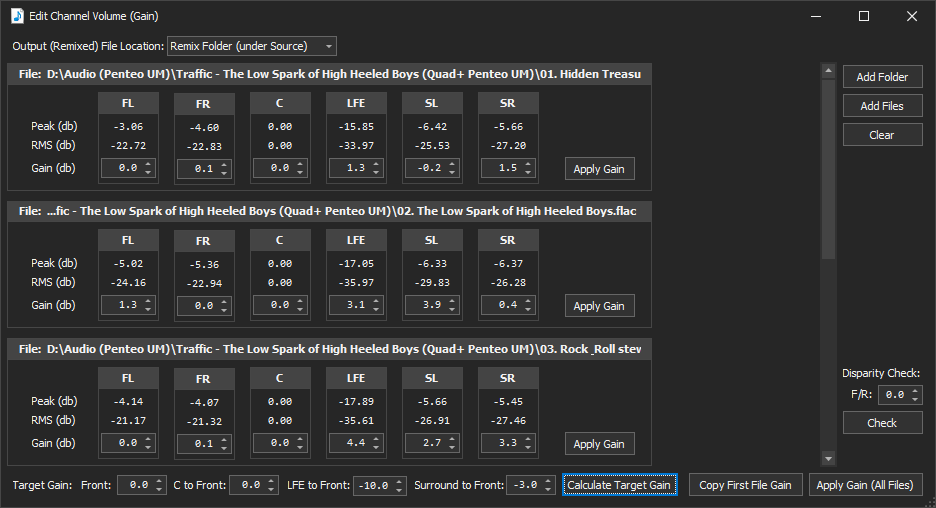 For channel groups Front (FR and FL) and Rears (SL, SR; and BL, BR if 7.1) MMH uses the RMS in the calculation and applies balance gain to all channels in the channel group. Users can increase/decrease gain manually on a channel-by-channel basis at any time.

NOTE: To maintain volume difference between album tracks it is recommended that users do not set a Front Target Gain as this would change all Fronts to same RMS value which is probably not the original artist/mixing engineer’s intention.

NOTE: Target Gain Calculation does not change any gain in a file, it only sets the Gain value in the dialog. ‘Apply’ must be used to update/save volume in each file.
Last edited: Aug 5, 2021

Another update to the MMH Volume tool's Target gain is coming:

When unchecked (off) MMH works as previous release and MMH first calculates gain required to make front L & R the same RMS volume (balanced) and uses the value as the Target RMS volume for all other channels.

To see how this works look at the second track in the previous posts screen shot vs second track in screen shot below. You can see the calculated Gain in first will make front L & R volumes same and Rear L & R volumes same. Below, with 'Target Individual Front Channels' on the calculated Gain will leave the front and rear channels with a slight difference in volume (fronts will not match and rears will not match). 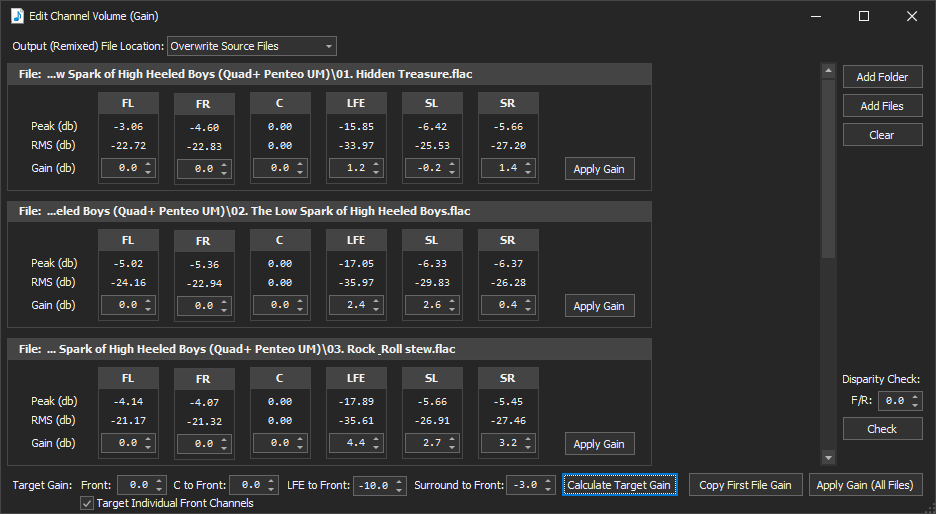 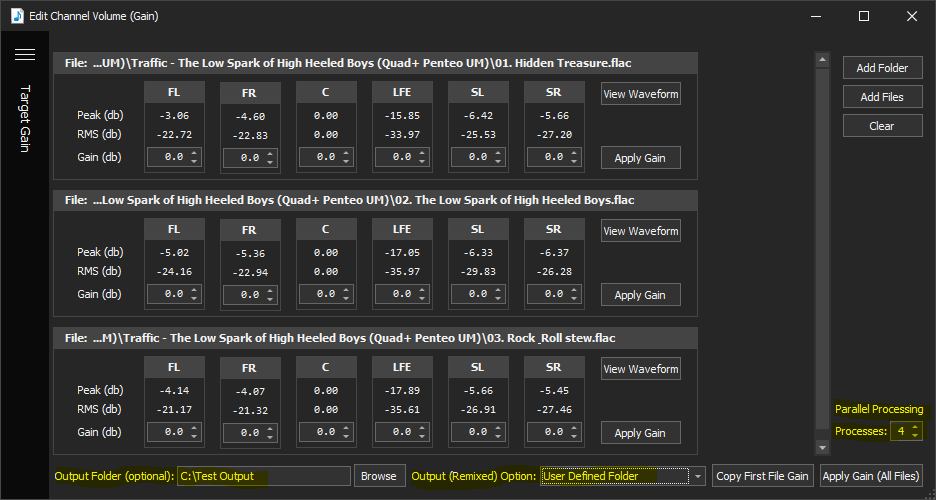 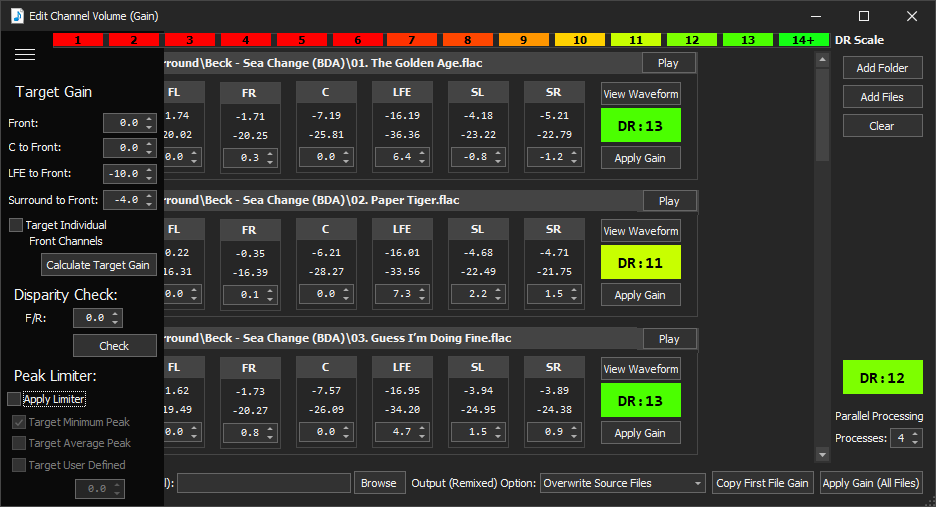 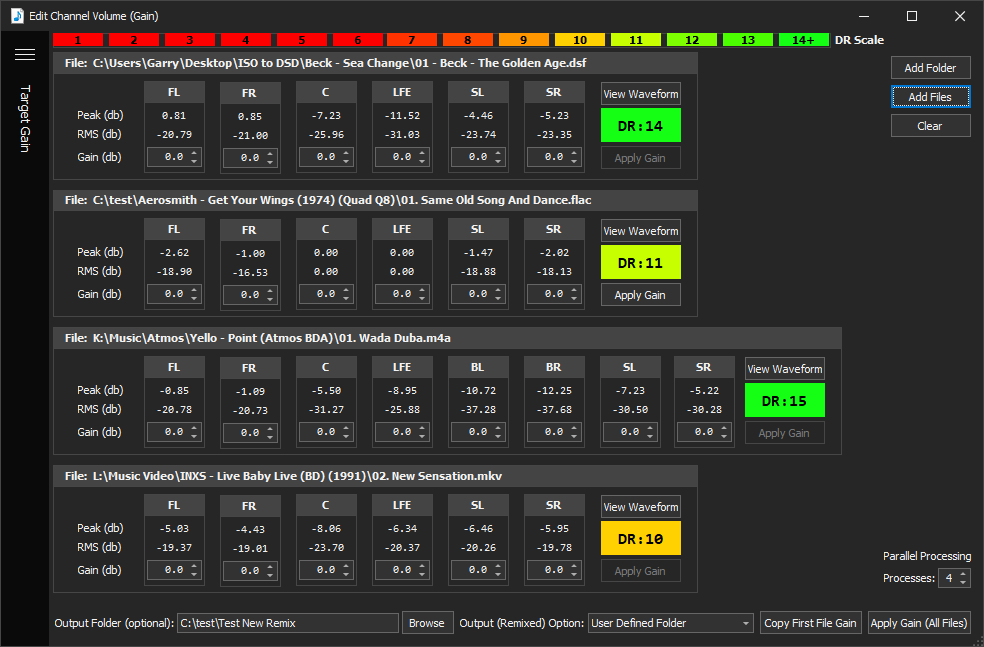 Volume can only be changed for FLAC and WAV files. (The Apply Gain command ignores all other file types).

The Waveform viewer also supports all the above file formats. Here's an example for an MKV concert video file: 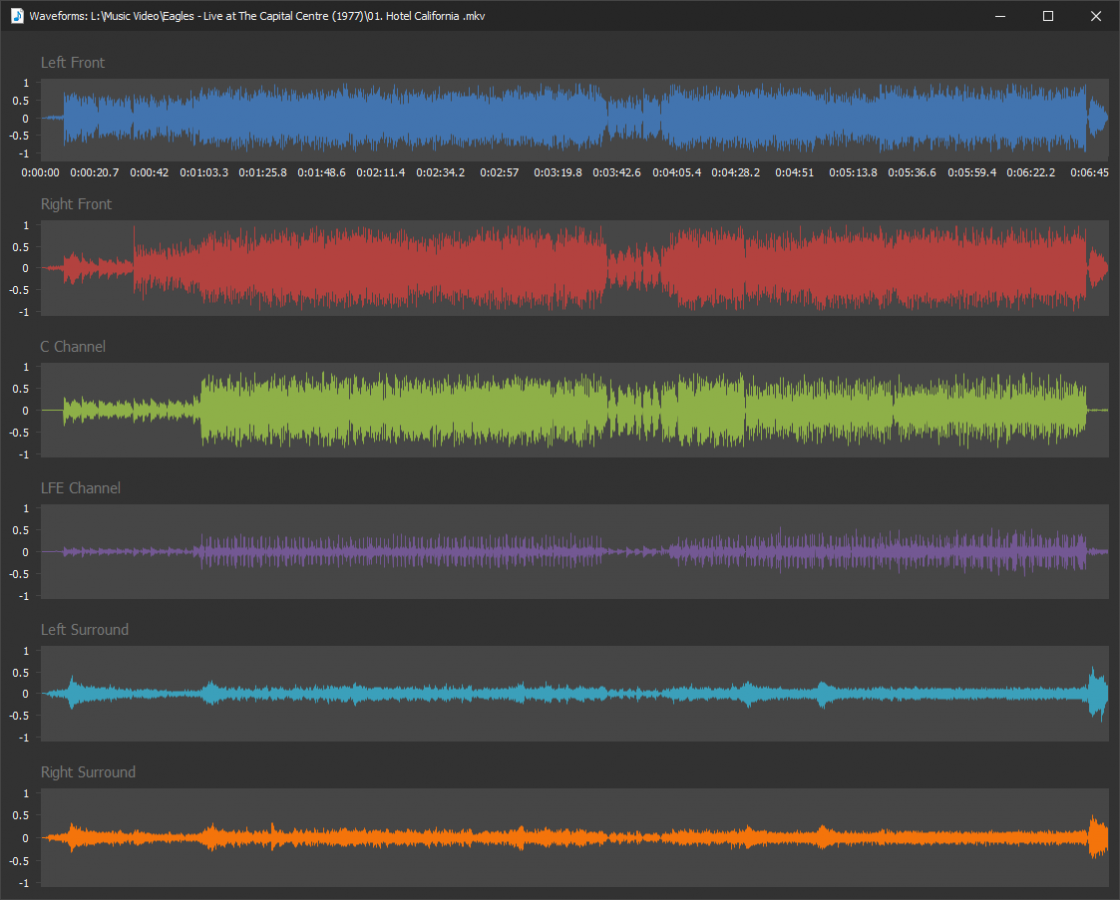 MMH 5.0.12 is now released with the new Channel Volume tool above