Over the course of two weekends I got myself an almost complete new surround gear!

I had an old Onkyo DD Receiver and a Boston Lynnfield VR speaker set. So I set out to look for a new set of speakers first.

After hearing a set of Monitor Audio Gold Signature (only the stereo setup) at a dealer I thought that they sounded really amazing. However, they come with a pretty steep price tag and the matching rears (which can be switched from dipoles to direct speakers) would be problematic to install in my room (I live under the roof and the walls are slanted).

I also wanted to try a set of Nubert speakers; Nubert is a German speaker manufacturer, and their speakers can only be obtained from them directly. The advantage is that you can order the speakers, set them up and try them out in your own home, and if you don't like them you can send them back within 30 days! Their speakers also get pretty good reviews in German Hifi magazines.

So I ordered a set of nuWave 105 front speakers, a CS-65 center, two rears DS-55 (these also can be switched from dipoles to direct speakers), and an active subwoofer AW-75.

After the speakers arrived I installed them and had a first listen in stereo: better than the Bostons for sure, but a far cry from the Monitor Audio!
Then I tried them in multichannel mode, and this sounded so much better!

The setup at the Monitor Audio dealer of course was completely different! And I knew that my Onkyo TX-DS656 was not really the best amp in stereo mode...

This prompted me to rush out to my Denon dealer the next day and get a new A/V Reveiver! I went for the Denon AVR-4306, and boy, did that make a difference! Suddenly, the stereo sounded really good and the multichannel even better!

Still the stereo reproduction was not a precise and detailed as that of the Monitor Audio (I might add that the stereo set of the Gold Signature costs about twice as much as the two 105 front speakers from the Nubert set...).

But this still didn't give me peace! There was a bigger nuWave front speaker available, the nuWave 125; shortly after a quick phone call with the Nubert hotline on Tuesday, a pair of nuWave 125 was on its way to my home

Yesterday they arrived, and so we carried them up to the living room and set them up! At first I was taken aback by the sheer size of these things! (The 125 stands for their height in cm) But after listenig to them, I knew that I could never go back to the smaller 105! These speakers were a revelation! They sound really marvellous!

One decision I still have to make though: I'm not sure I really need the active sub with these main speakers. Certainly not for music! I'll test over the weekend if I want to keep it for movie sound, or if I will send it back along with the 105 front speakers.

So, a new era of sound has begun in my livin room! :banana:

I attached two pics I just took: the first shows the front left main speaker, the active sub, and the center spreaker; the second one the right rear; it may look like a direct speaker, but it has a second driver in the back for the dipole mode. The speaker cable will be hidden in the speaker stand, this was just the preliminary setup until I knew if I would keep these speakers.

Very nice!! Their silvery finish kind of remind me of the Athena Technologies speakers, sister brand to Energy and Mirage.

By the way, those stuffed animals....are these for room acoustics purposes?

Hi soundboy,
I thought it was a nice look to have a bit of contrast for the speaker colours instead of a more uniform dark grey/black in which they come as well.
As for the teddy bears: they are the crew (did you notice that they wear Starfleet uniforms? )
Best regards,
Oliver

Always fun to have new toys! I had a listen to the Monitor Audio Gold speakers when I bought mine as well. They are really nice, but I need to win the lottery before I can have them. I don't know anything of the nuWave speakers, but if they come close to the MA Golds you'll have a great setup.

I just dicovered that I had a few close-ups of the bears on my hard-drive
I'm not sure if they are still in the right category (Hardware); they feel pretty soft to me

The Nubert speakers sound mighty fine. I'm not sure if the GS would be better for me in any way, I haven't heard them side by side with the same equipment in the same room. The Nuberts are larger than the GS, and I still think that the design of the GS is a bit better.

However, for a 5.0 set (the matching active sub is still not available from Monitor Audio) the GS would cost me about 2000 EUR more than the Nubert set! (at least when I look at the list price).

hiding the speaker cables is a bit of a project, because it requires some home improvement action to get a few holes in the cabinets and shelves

At least I got around to fill the stands for the rear speakers with sand and pull the cables through the columns of the speaker stands, so it does not look quite as wild as before...

Also, I installed the protective grates (they are made from metal) on the speakers (they can just be pulled of) because I was a bit nervous about the speakers being vulnerable to accidents; especially if my brother comes around with his 2 years and 3 months old daughter

I find that the sound quality is not noticably impaired by this and I think it still looks good.

Also, I took a picture of the front speakers framing my screen so that you get an impression what this looks like in movie mode (the screen is a 16:9 WSSpalluto motor screen with 1.2 gain and 213x120cm visible area).

And for those of you who noticed the Star Trek bears before I had some special guests pose in the pictures of the rear speakers. Let's see if you recognize them (if not: D'uuhh!) @:

P.S.: I still can't get over how much better these things sound than my old Bostons, even (and especially) in stereo! I'm rediscovering my CD collection! :banana:

And to give you an impression how this look in home cinema mode here's one shot while watching Enterprise... :banana:

I think I need a front projector.

Sorry I missed the Starfleet uniforms on the bears. I see Gromit, no Wallace?

Did the new speakers come with grates? Or are the metal ones your own customized design?

if you use your multichannel sound system to also watch movies, I can only recommend getting a front projector! It's the only way to get a picture in a size which matches the majestic sound from a good surround system

Big sound and small picture just seems mismatched (of course, this also goes for a big picture with small sound).

I only have the Gromit, no Wallace... the Gromit I once got from a trip to London at a time where Wallace & Gromit were rather unknown in Germany.

The fellow on the other rear speaker comes from a different franchise altogether (the acorn should be a dead giveaway, though... )

The grates come with the speakers by default. The manufacturer claims that the metal grates influence the sound less than fabric covers would...

Those stuffed animals and all that other stuff no doubt helps with the acoustics in your room.

The diagonal ceiling helps too as any sound waves not absorbed by the animals that bounce off the walls will diffuse more quickly than if you had a room with all right angles.

Congrats with your speakers El Guapo,
I settled for the Nubert NuLine series, one size smaller. They had a better WAF
One of their strongs points is the sense of spaciousness. I think the placement (in the room) can be difficult (distance from walls, I also tilted them a little bit backwards). Later I got the matching ATB (the older modell of the ATM) so now they reach subwoofer frequenties without dropoff. :51banana:

Ge, thanks!
Fortunately, I don't have to worry about the WAF

I find the nuWave 125 to be that much better than the 105; not just in the bass department, they also reproduce so much more details in the mids and treble.

The ATM (or ATB) modules seem to be quite popular among the Nubertists... does it really make such a difference? Unfortunately, I cannot just order one and test it, since the Denon 4306 does not have main in connectors. So I can't loop them in properly (ok, I could test it with the manual switch, but what would I do then if it really sounds better? I'm just too lazy to get up every time I want to change the source )

Have a look at this thread in the Nubert forum. It's in German, but I think you will get a kick out of the posted pics alone. These are instructions how to modify a Denon 3806 or 4306 to install main in connectors, just so that ATM modules can be looped in
The nerves some people have... :worthy

El Guapo said:
The ATM (or ATB) modules seem to be quite popular among the Nubertists... does it really make such a difference?
Click to expand...

Yeah, Rudijopp is "da amp split-up king". There is even a instruction for my amp.
But i just connect it between the pre-out(L+R) and the zone2-in. Then I connect my fronts to the outputs for zone2. After adjusting the volume for zone2 it's go.

OK, ,so I could not find the "NEW GEAR" thread (was there one?), and this is just new (used) gear...
Took MANY a message to the seller who in the end at least shipped it in one box inside another but did not use the lock for the arm nor took out the platters BUT he did tape them carefully into place.
I am a proud owner of a WORKING(!!!!) Technics SL-QL1 BLACK TT ..with a ...GRADO(???) cart!!!! I guess the cart is more expensive than the TT!!!!
The TT is filthy so I cleaned it a bit...I see filth in the outside part of the platter(silver with grooves)..what do you recommend to clean that off???

It PUUURTY!!!! (this was the fleebay pic, it's cleaner now!) 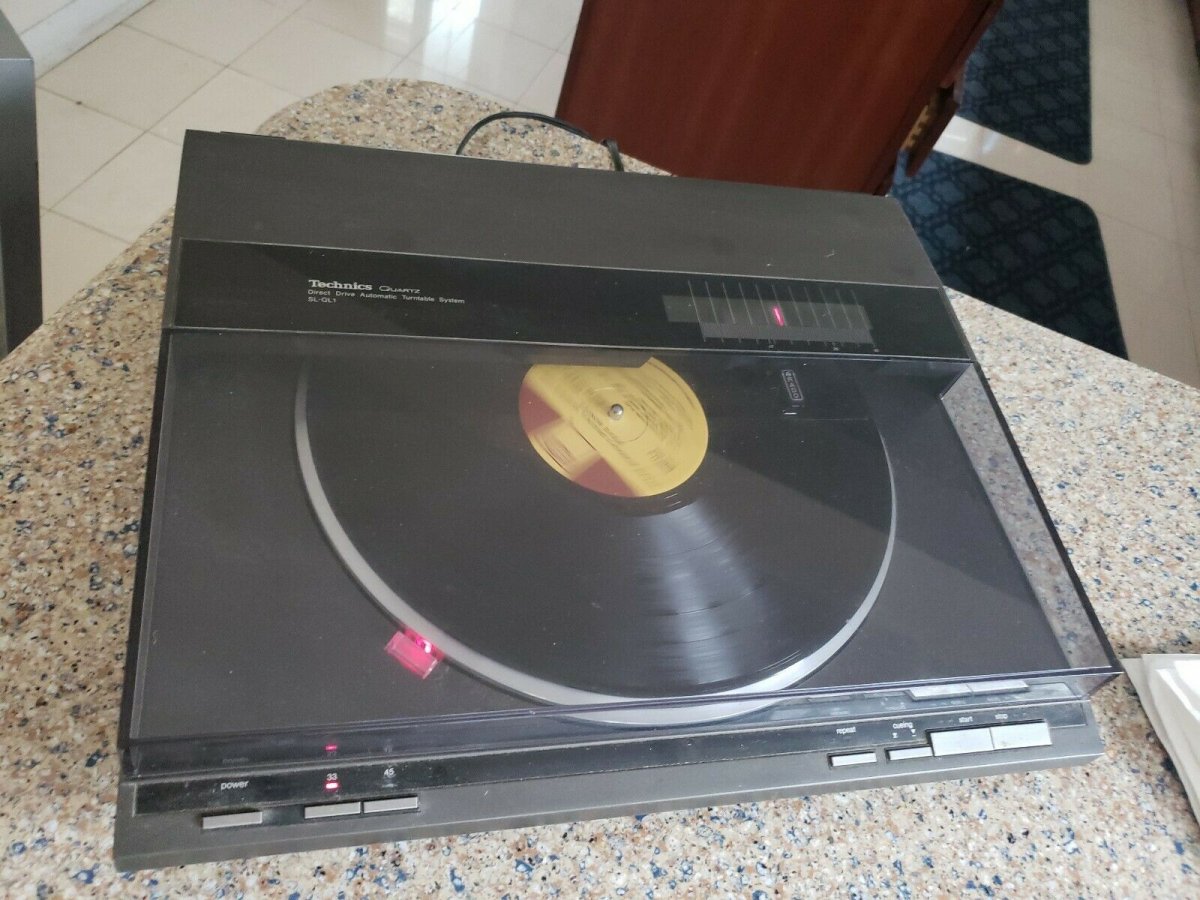