Just got mine, complete with the autographed poster nicely rolled up in a cardboard tube. Tonight's entertainment. ☮

GOS said:
Hmmm - I sort of like it. I dunno if I can appreciate these "other" musicians sort of clowning around. Not used to that I guess during PF songs. I may have to buy this.
Click to expand...

I agree with you. The vocals do not work for me just not as compelling, seems like someone having fun trying to sing like Syd and Dave

Had an email from Amazon this morning saying that my Bluray was going to be delayed again and couldn’t give me an arrival date. However it showed up in my mailbox at lunchtime! Much better than the original estimate of early November. Just need to find time to watch it.
Anybody found any Easter Eggs on it yet?

Ranasakawa said:
I agree with you. The vocals do not work for me just not as compelling, seems like someone having fun trying to sing like Syd and Dave
Click to expand...

If you mean Gary Kemp, he says on the blu-ray that he was not trying to imitate Syd, but maybe he has a bad voice, didn't listen to Spandau Ballet in the past, so I will check this today.

rugene said:
If you mean Gary Kemp, he says on the blu-ray that he was not trying to imitate Syd, but maybe he has a bad voice, didn't listen to Spandau Ballet in the past, so I will check this today.
Click to expand...

His voice or at least the way he’s sang some of the things were my only dislike both after I saw them in Indy and my first spin of the blu Ray, I must say it doesn’t bother me as much now.

I do wish he would have tried to imitate Syd’s voice more though.

Ranasakawa said:
I agree with you. The vocals do not work for me just not as compelling, seems like someone having fun trying to sing like Syd and Dave
Click to expand...

Me also. Doesn't do it for me either as it doesn't capture what the essence of the original vocal was for me

The only song the interpretation is not my cup of tea is Bike. It is too fast and has no emotion.
The rest I like very much

If you want to hear the original versions, listen to them. Why should people imitate other peoples voices? Then they get accused of pretending to be someone else. They can't win. Better not to try, I suppose as someone will always hate it.

I thought Lucifer Sam was brilliant, but it got a 'nothing' rating on iTunes for track sale popularity. I always dug that Peter Gunn-esque bass line and the live version is the dog's bollocks.

I really hope this blu ray leads to a renewed interest in pre- darkride Floyd because this could lead to releasing Andy Jackson’s 5.1 remixes of Meddle and OBC which then would lead to Animals 5.1 getting released.

Watching just the first few minutes of the BluRay using the uncompressed 5.1 soundtrack and am blown away with the surround field they create especially after Lee’s fretboard run around the room and the sound effects. Awesome mix so far. Picture is great too.
Last edited: Sep 23, 2020

Does anyone know if they included a download with the vinyl version because I might just have to get that too.

As others have mentioned, there's certainly more than audience and ambience in the rears. In some of the freakier songs (Saucerful, Interstellar, Set the Controls, etc...) Nick Davis throws some cool stuff to the back. Whereas songs like If or Green is the Colour don't employ the rears too much.

It's a great band having a great time breathing new life into some old classics.

OK. I did finally watch a good chunk of this disc. I will politely say....IT'S AWESOME! I inititially said I was taken aback by these "guys" who were having too much fun. Fuck that. This band jams, and they do a good job of it. And, this is really a great surround experience. Clearly, you can tell the Floyd roots. Some excellent moments. I absolutely, 100% stand behind this. Get it. You will not be disappointed.

Too bad many of today's kids (meaning younger Millennials and Generation Z(ombie)) don't appreciate real rock and roll (I'm sure there's many exceptions, but as a general population kind of thing, I just don't know. I don't like what I'm hearing on the radio these days). This pop stuff they crank out today is often made with computers generating patterns automatically to get started. It's probably why they all sound more or less the same. Throw in some pitch correction and you might as well have the Sam voice synthesizer from the C64 computer sing the song, IMO.... But real artists can't necessarily get anywhere in the industry anymore. They want pretty people for fans to obsess over (I think they really started to push that with Britney, maybe even before). Bands or artists that write their own music are so much more interesting. They have a "sound" so-to-speak. Yeah, kind of like the Pink Floyd Sound! And frankly, if you can't sing without pitch correction, you should find another job.

It must have been cool to grow up in the '60s and '70s (or even '50s) in terms of music happening everywhere and growing ever more experimental (ignoring politics and war and all that in those years). Now it feels kind of bland in the popular genre. I grew up with '80s music and it was still more fun than today. I kind of lost interest when grunge came out and started going alternative. But now I'm having a hard time even finding alternative music I like. I've actually gone backward and started listening to big band and what not (I'm a huge Bogart fan so I see a lot of movies with big band stuff going on in the background).

I watched this last night in it's entirety, and I must say, I enjoyed it more than I thought I would. Some of the vocals were not spot on, but face it; this is a PF cover band just like Waters and Gilmour (although I think Gilmour's shows are the most PF sounding). The band sounds tight, and for the most part, these guys sing pretty well. The singers Roger has used over the years sounded nothing like David Gilmour IMHO. That doesn't mean it's a bad show. So I don't care if the vocals don't sound exactly like Syd Barrett or a young Roger Waters, I'm just happy to hear and see some of this music played live again.

Good show, not all the songs were terrific but enough good ones to not fall asleep. The vocals were ok. The surround mix was mainly for special effects, no instrumentation in the rear.

MagnumX said:
Too bad many of today's kids (meaning younger Millennials and Generation Z(ombie)) don't appreciate real rock and roll (I'm sure there's many exceptions, but as a general population kind of thing, I just don't know. I don't like what I'm hearing on the radio these days).
Click to expand...

Don't worry my nephew who is now 20 has listened to AC/DC & Led Zep since he was 14, and one of my friends sons who is 13 has 'stolen' all his rock, blues and prog CDs along with his electric guitar! So its not all bad.

I dumped the concert and used Handbrake to enter track titles into the MKV file for KODI (2.0 FLAC 24, 5.1 FLAC 24 and a passthrough of the 5.1 DD as options). I found some of the tracks are more than one title on the track listing (e.g. Beginning + Interstellar Overdrive and Obscured By Clouds + When You're In and If + Atom Heart Mother + If (Reprise)). I sampled a half dozen tracks when I was done (an hour past when I should have went to bed) and played a few of my favorites (e.g. Lucifer Sam, Fearless and Set The Controls For The Heart Of The Sun). Excellent!

Among the delights of this concert blu ray are little quotes from other songs that pop up in the arrangements.
Like Guy Pratt inserting Entwistle's bass line from "The Real Me" during "See Emily Play."

Later he plays an Entwistle signature Buzzard Bass on "Let There Be More Light." 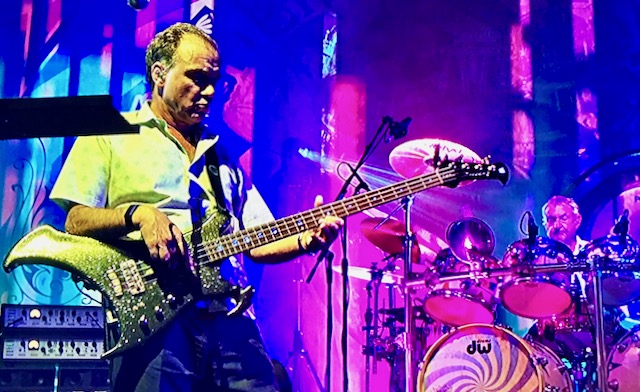 Entwistle's Buzzard collection, lined up on bar stools in the pub at his mansion: 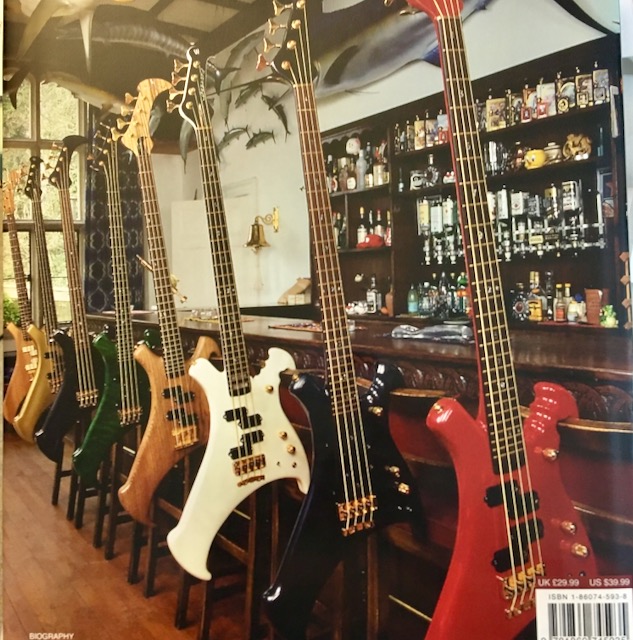 ~dave~~wave~ said:
Among the delights of this concert blu ray are little quotes from other songs that pop up in the arrangements.
Like Guy Pratt inserting Entwistle's bass line from "The Real Me" during "See Emily Play.
Click to expand...

I remember loving the Entwistle quotes from "The Real Me" and "5:15" when I saw the band live. I forget what song it was in, but when I watched the blu-ray I noticed another one that I hadn't picked up on when I saw them in person....on one of the tunes Guy plays Entwistle's intro bass line from "Getting in Tune".

I had seen Pratt play multiple times over the years on the Lapse, Division Bell and Rattle That Lock tours. I had always found him to be a decent bass player but he had never really grabbed my attention. On the S.O.S. tour he really blew me away. (As did the rest of this band). He was so energized. It was a treat to watch him play.
You must log in or register to reply here.
Share:
Facebook Twitter Reddit Pinterest Tumblr WhatsApp Email Link