Darrell, were you aware that Neil Young has a new hi-res download format, and that he's applied for a patent? This came up at dinner this evening and I began a new thread: https://www.quadraphonicquad.com/forums/showthread.php?15846-New-Hi-Res-Download-Format-Neil-Young-Applies-for-Patent! Would you care to comment on this?

Jon, what was the date on the Billboard Capitol QS article?

Thanks, Darrell, for sharing some fascinating insights.


DarrellJ said:
Like a lot of people I have for the most part adopted high bit rate mp3 as a storage medium and though it is acceptable it is a long way from audiophile. Home computers being what they are have dramatically changed how we manipulate music content. I have a dedicated media server on a home network and pretty much listen to most music from it.
Click to expand...

Yes I am aware of Neil Young's efforts to create a new "audiophile" compression standard. I admire his work. But he is a little late to the table. MP3 and OGG are both well entrenched in the network world already and efforts to bring another format into play will I am sure find adopters among the open source community. How to fund something like this yet keep it free to the everyday user is always and issue. The economic state of the music business will deny the success of any format that will require a licensing cost as they are squeezing pennies like nobody's business. The state of the cloud today and the popularity of music downloads would just about guarantee the acceptance of a better sounding "true audiophile" format. You would have about the same percentage of adopters as you have audiophiles among the regular music consuming public. So hurray to Neil and I am among those who would welcome the possibility of better sounding music files on the net.

I realize that I never answered this. As few (don't bust my chops on the quantity) CD-4's as were released, there are several great demos.

Time to wake up this thread.
On of my favorites:
Citizen Kane RCA QUADRADISC ARD1-0707
Very impressive sound by DECCA engineers. (K.Wilkinson)
Rear channel effects are abundant as are some rare instruments.
(brake drums from a Volkswagen, and the obsolete "Serpent")
Can usually be found on fleabay for around $20 US (and even some sealed ones). 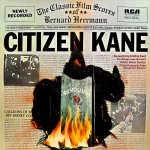 This recording features the National Philharmonic Orchestra conducted by Charles Gerhardt,
with Kiri Te Kanawa, soprano and Joaquin Achucarro, pianist. In addition to music from Citizen Kane,
there is also music from Beneath the 12-Mile Reef, On Dangerous Ground, White Witch Doctor and
Piano Concerto from Hangover Square.
B

Doobie Brothers "Blackwater" is one of my all time CD-4 demos. It has great separation in the rear channels.

DarrellJ said:
Doobie Brothers "Blackwater" is one of my all time CD-4 demos. It has great separation in the rear channels.
Click to expand...

I might add that Tadashi Hyakkan and I did the CD-4 Mastering for this LP at the original JVC Cutting Center in Hollywood.
T

Hi DarrellJ - I am new to CD-4 but I have been using SACD 5.1 for 5 or so years now. I bought a handful of CD-4 records and the one thing I notice is the levels are quite low, with the exception of Tomita's Firebird which really works very well, and sounds fulsome.
Why is there hardly any bass in CD-4 records so far? Or am I just listening to rubbish ones? The quad so far is very discrete and its no contest with SQ, which is so vague its hard to hear any directionality other than stereo left and right. However the SQ has better and more normal sound quality. I assume CD-4 got better as it evolved? When was the last record pressed?

I realize that I never answered this. As few (don't bust my chops on the quantity) CD-4's as were released, there are several great demos.
Click to expand...

Great list of some of the best CD-4 Quadradiscs. Stardrive is my #1 choice, but pretty much all of the others on your list are up certainly among the best.
T

I have Stardrive by Robert Mason. I haven't played it properly yet. Thanks for your list!

The Prof said:
I have Stardrive by Robert Mason. I haven't played it properly yet. Thanks for your list!
Click to expand...

Well, you are in for a Surround Sound treat!

You're welcome for the list. Back in '73, Stardrive was the way we preferred to demo CD-4 through four Altec Voice-of-the-Theater corner horns. Let me take you down, indeed.


The Prof said:
I have Stardrive by Robert Mason. I haven't played it properly yet. Thanks for your list!
Click to expand...

I wanted to resurrect this 6 year old thread for a couple of reasons - one is there's a volume of great insider information in the first page from Darrell Johnson ( @DarrellJ ) who worked at the JVC Cutting Center in Hollywood where the majority of US CD-4 LPs were mastered. The other is because of this snippet from Billboard that Jon posted:

Here's the Billboard piece. Do you buy it?

Jon, what was the date on the Billboard Capitol QS article?
Click to expand...

It's from page 3 of the September 7th, 1974 issue of Billboard, and I think it's one of those kind of apocryphal stories that's lingered in quad-dom for decades because it gives people hope that there's even more double-secret quad out there just waiting to be discovered. To me it just never made sense - the "spokesman" in the article sounds confused, like a kid who didn't do his homework and got called on by a teacher to answer a question.

I was recently rummaging through some old issues of Billboard online and it turns out that Capitol rebutted this article the following week: 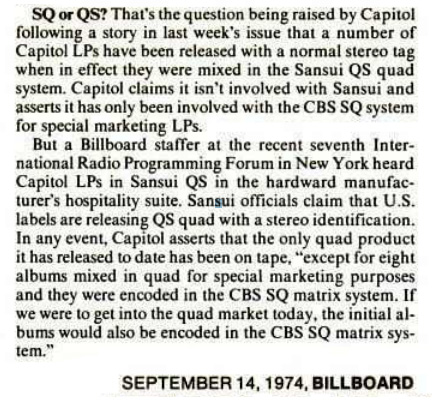 To me it sounds like Sansui was trying to bluff that QS was gaining market penetration by suggesting that lots of labels were doing this "stealth quad" thing, but it really makes no sense at all. Why go to all the trouble of mixing an album in quad if you're not going to tell your target audience so they can decode it? I saw a mention in one of the trades from 1974 that a quad mix cost about $5,000 (which is about $26,000 in today's money) to do - seems like a lot to spend on something you're going to keep a secret.

It's also worth noting that history has borne out everything Capitol says in this rebuttal article to be true - those 'Special Markets' easy listening LPs (Sounds of the 70's Orchestra, John Morell, San Fernando Brass etc.) were indeed the only SQ LPs they ever released. Both articles seem really light on details too - if a Billboard staffer heard some Capitol QS quad at a trade show, you'd think they'd be able to name at least one album or artist they heard. The only legitimate scenario I can come up with for this happening is that maybe Sansui brought some of the QS-encoded Toshiba-EMI LP's from Japan like The Lettermen Live in Japan, or they simply played some Capitol stereo material through a QS decoder in its "synthesizer" (aka upmix) mode and told the Billboard writer that it was quad.

It also seems like if either Sansui or Capitol were going to make any kind of announcement they'd do it somewhere more prestigious than the 'International Radio Programming Forum' and with a little more certainty than we got in that original article.

So while it's impossible to debunk the initial article entirely (you can't prove definitively that something doesn't exist) to me it seems pretty obvious that someone at Sansui was making it up as they went along at a trade fair, not expecting what they said to make it into print in Billboard.
You must log in or register to reply here.
Share:
Facebook Twitter Reddit Pinterest Tumblr WhatsApp Email Link