Daphne of the Dunes

Barstow--Eight Hitchhiker Inscriptions from a highway Railing at Barstow, California

Castor & Pollux: A dance for the Twin Rhythms of Gemini from Plectra & Percussion Dances 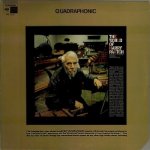 Voted "7" on this mainly since the material is fun, yet esoteric. Not everyday listening. Also, the mix is more of a sound-field experience instead of a discrete quad experience. It sounds as if you are in the middle of a very live room with the performance happening around you. Had to import a copy of this from the UK as it is pretty rare. Didn't break the bank, though and overall happy to have it in the collection!
-------- Chris

Very avant-garde stuff. Truly NOT for everyone! A Quad favorite of mine. This album turned me into a die-hard Partch fan. Although not Quad, I also strongly recommend his 2 LP/1 CD Delusion of the Fury, also originally on Columbia. Here's a piece from "World of Harry Partch":
Barstow: https://www.youtube.com/watch?v=rRXDYgYQYXM&spfreload=10

For this one, I’m joining @Quad Linda and lifting my proscription against “10s” for legacy formats. This album is just too cool, and everybody needs to hear it.

Partch was one of those American musical originals: he’s in the realm of Charles Ives and Harry Smith and Raymond Scott and Robert Ashley and…I donno…Anthony Braxton and John Zorn, maybe? The “eccentric genius” moniker doesn’t begin to do him justice.

He invented tunings and scales and systems of notation and instruments with names like the Chromelodeon, the Cloud Chamber Bowl, and the Spoils of War. (A few years ago, they were in the news when they crossed the continent, moving from their longtime home at Montclair State University in New Jersey to the University of Washington.) Paul Simon used some of them on Stranger to Stranger, and Hal Willner featured them prominently on Weird Nightmare, his Mingus tribute album.

On this record, you hear Partch’s trademark microtonality, his love of Chinese classical music, and his devotion to the “speech-music” of transients and down-and-outers. There are bell-like sounds, marimba-like sounds, and metallic-sounding strings that will put listeners of a certain age in mind of the cimbalom that colored Lalo Schifrin's 1960s TV scores. Okay, so maybe, like Linda says, it’s not for everyone, but it’s not just for freaks and eggheads, either.

I suspect the matrix format doesn’t do justice to the mix, as there’s plenty of (uber-)discrete activity on the excellent Q8 conversion I’ve heard. Seems to be the one and only quad outing for Ed Michalski, who otherwise engineered scads of classical records for Columbia, including a ton of Bernstein and Ormandy and E. Power Biggs, but who also wasn't afraid of 20th-century composers.

I can’t fathom how this album ever got made, let alone released on a stodgy label like Columbia. (Let alone remixed and re-released in quad!) But it’s a beautiful thing that it did. Maybe Columbia was counting on some spillover from the “Switched-On Bach” crowd, or from the highbrows who were snapping up the Contemporary Chamber Ensemble series on Nonesuch? “Eight Hitchhiker Inscriptions” is more Ed Sanders than Rochberg or Babbitt or Elliot Carter, though, never mind Wendy Carlos.

Linda nodded to Partch's Delusion of the Fury, re-released on CD by indie label Innova, which also put out a bunch of other Partch stuff. What they missed, CRI picked up--later reissued on New World. Here's a primer on all of it. A lot of these would upmix well, I bet.
B