I bought two vintage pieces of gear...one was a QSD-1, the other a Marantz 4140. The QSD-1 was like new, in excellent condition. I also bought a Marantz 4140, also in excellent condition. Both quite remarkable. The QSD-1 had been bought by the seller new in the late 70's...it came with box, etc.. The Marantz he had picked up along the way, becoming the second owner. Anyway, bought both pieces at different times, for a fair value, the QSD-1 at a very fair price. Now, fair to me may not be fair to others...I tend to buy exactly what I want and do not mind paying perhaps a premium to that end. Anyway, the seller's name is Carmine and he sold me some very nice units, well cared for and they were exactly as advertised and even better.

Carmine contacted me a while back and gave me first shot at his prized QX-949A. I passed....working on some Involve items, and perhaps a Wurly Scope. He listed it on eBay but it did not sell. He contacted me again yesterday. He said he will post it again on eBay on Sunday, but would like to provide the QQ an opportunity prior to that (I had told Carmine about the QQ). I can say that what Carmine sold me was top of the line. He cared very much about the units and it showed. If interested, PM me and I will provide you Carmine's email address to start the conversation. Below is the description from his first eBay ad and some pics.

Reluctantly, I have decided it is time to sell my cherished Pioneer QX-949A that I purchased new in 1976. Over time I have gravitated towards separate components and as a result this receiver has been relegated to storage in climate controlled storage for the better part of the last 30 years in it's original box. I have recently tested it and found that it operated properly in both 2 and 4 channel modes.

All lights including the ones on the scope work as well. It looks absolutely beautiful. Any potential new owner would be hard pressed to find anything more than very minor cosmetic flaws.

Even though those are accurate statements I would advise the successful buyer to have it cleaned and lubricated by a qualified technician familiar with servicing vintage Pioneer equipment. As you can see via the attached photos, it has only been serviced once in its lifetime and it was so long ago I don't remember what it went in for. Suffice to say it was nothing major.

This QX-949A will include the original:
* Pioneer Box with original cushioned side braces
* Operating Instructions
* Service Manual which I purchased separately. Has some writing on the cover
* Schematic Diagram
* CD-4 Test Record
* Rare foldout full color Pioneer advertising brochure for the QX-949, QX-747 & QX-646 models
* List of Authorized US Pioneer Service Stations in the USA at the time

* Copy of a Stereo Review test report of the QX-949 from May 1974. Not great quality but very readable

This is a rare opportunity to own an exemplary example of an exemplary piece of US Pioneer equipment which was the flagship and most advanced of all their quadraphonic offerings. It also works well as a traditional stereo receiver as well that has more inputs/outputs than most receivers and pre-amps. I have used it in both modes and in the quad version as I have a fair number of SQ and CD-4 records. For Sansui QS source material I used a Sansui QSD-1 decoder/synthesizer which I sold several months ago. Although Pioneer advertised it at 60 watts RMS per channel in stereo, the included Stereo Review test report revealed that it tested out at a respectable 72 watts per channel RMS in stereo mode. The Pioneer QX-949A was clearly one of the most versatile pieces of high fidelity equipment offered by any manufacturer.

FYI the QX-949A offered two obvious changes over the original QX-949.
1. First the SQ decoder on the QX-949 was replaced by a more advanced "full logic" SQ decoder on the QX-949A. The upgraded decoder offered better separation between the channels both from side to side and front to back on SQ source material.
2. Second the heat vent towards the back of the receiver cabinet was expanded all the way to the back end. The advantage of that obviously is better heat dissipation. I'm confident that Pioneer made some other changes inside the unit as well. 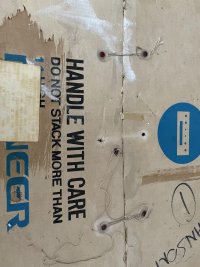 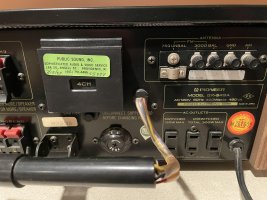 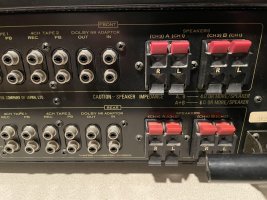 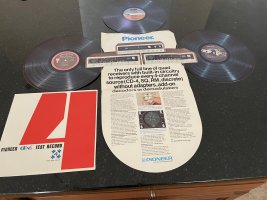 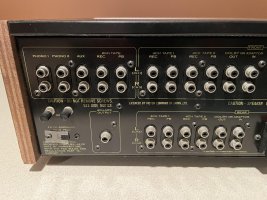 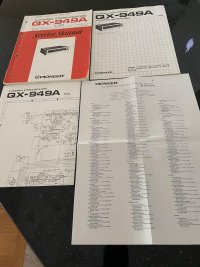 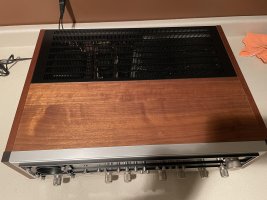 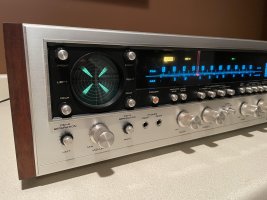 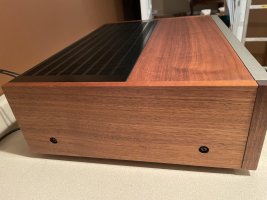 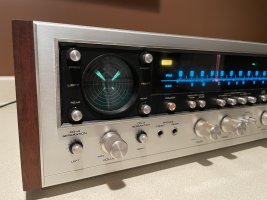 I love to see photos of gear that's be taken good care of. !

What a pretty thing. How much does he want for it??

V
Was gifted a Pioneer QX-949 that looks like It was never used in decades.