gene said:
Where did you find this date?
Click to expand... 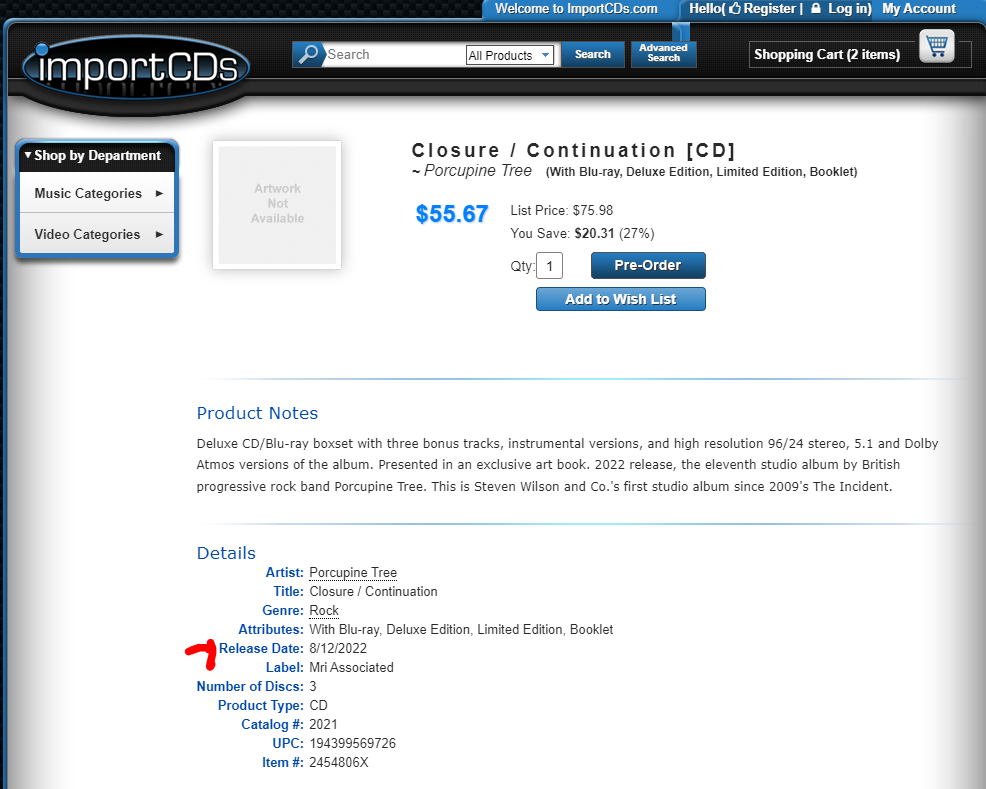 I agree with most people on here about their frustrations with stock issues and so on. I’m almost considering cancelling my order altogether. If I’m being honest this album doesn’t completely do it for me, it’s good but it doesn’t hit me the way the other records do. I’m pretty satisfied with the Apple Music stream and it should be up for the foreseeable future. I have no real use for the CD’s or the art book of white squares either.

I’m definitely liking it more with every listen, and I guess I’ll throw my favourite tracks in order:

I'm keeping my order with Importcds, but agree with your frustrations. After pre-ordering nearly a year ago only to endure another 6+ week delay for US distribution while UK deliveries are experiencing no apparent issues seems like a middle finger to US fans, specifically. I'd really like some details around the "supply chain issues" being cited as the delay reason. That common and generic excuse is sounding more and more like a whitewash for failures to anticipate demand, ramp up production and secure distribution well ahead of the release date. It's not like they couldn't see it coming.
P

I just bought ir from amazon uk and was only like 1 buck more then my bullmoose with free shipping, Fastest shipping and it will be here Monday? Amazon said Friday.. hope it speeds up .
F

My local record store had one (or two) copy but it sold quickly. I'd like to encourage them, but in this case it's 20$ more than ImportCDs (including shipping). Amazon Canada says it will be in stock on July 22nd. Amazon UK is the same price as Burningshed for me when counting shipping, which is 10$ more than locally, 30$ more than ImportCDs. I guess I'll just be patient and listen to the album in streaming in the meantime.
Last edited: Jul 5, 2022
F

Glad to hear I'm not the only one wondering where my copy is.

Happy Friday!
My copy just arrived from the Burning Shed. I ordered it last Friday and now it in my Oppo....

Sony really dropped the distribution on this one.

I have, heretofore, "forgotten" to buy this album. Tickets to the show, yes.
Just not excited about this album.
Somebody convince me that it's worth it?
E

Well, apparently my package from Burning Shed is lost in the mail, somewhere in LA. DAMMIT
G

Perpendicular said:
Sony really dropped the distribution on this one.
Click to expand...

Why did the US get no distribution?

If you order it now, it probably won't arrive for a month anyway

Seriously though, why not pull up the Atmos mix on Apple Music and check it out?

Just sent an email to DeepDiscount about cancelling my order, so we’ll see what comes from that. They really dropped the ball on this one and it’s not something I’m going to support, but to each their own.

I also think the art design of the white squares is utterly ridiculous and not something I’d expect from PT. When they announced the album I honestly thought the cover was just a placeholder and we’d see the actual cover later on, but it’s just pure laziness.

If they release a CD/Blu-ray combo down the line, I’ll probably spring for that. The deluxe edition might even be on sale in the coming months and I’ll grab it then, but not at full price.
F

I'm thinking of cancelling my ImportCDs because my local record shop has it in stock, although it's 20$CDN (~15$USD) more expensive... I like supporting my local record store (they often have surround editions and boxsets), but it pushes the price above my personal limit. I'm really torn, especially with the album being good without being excellent and with the lack of extras or other things that add value.

I just canceled my order with Amazon. I’m tired of waiting and can now divert the funds to other music I’d rather have. Someday, if it’s still available and dirt cheap, I may pick it up. For now, I have plenty of PT and SW to hold me over.
G

Totally agree. If you look at all of Steven Wilsons ltd editions, Porcupine trees The Incident ltd edition and Arriving Somewhere ltd edition which have all got quality artwork and content, this release is very flimsy and extremely poor on amount of content and artwork. The album is great but 80! euros all up is daylight robbery. Where is a making of dvd? Why not have the three extra tracks also in Atmos and 5.1 and where are the demo’s?

I thought the white square was only on the cover. On every picture is very strange. Perhaps SW is aiming for a picture book rerelease (limited edition of course) later on.

I think what’s disappointing to me is that there is enough stuff out there that would have easily made this into a much better package.

The online “Complete Air Studios sessions” plus the band interviews could have been on the blu ray. They could have used Anil Prassad’s Innerviews Interview and put that either on some extra pages or in the white boxes (I get the white box concept as an artistic things because … well it is what it is).

The bonus tracks even if they’d been on the disc in hi res stereo would have filled some of the space.

Ultimately anyone with a blu ray burner could make up that disc for themselves and it would take the box set to the next level.
You must log in or register to reply here.