Porcupine Tree - Did you discover them because of Surround Sound?

Please post your thoughts and comments on this 2014 5.1 release from RoadRunner Records. Pre-release comment thread can be found HERE :thumbsdown::phones:thumbsup:

Thanks, I forgot about that album, and I was never sure if SW did the mix for it or not.
C

View credits, reviews, tracks and shop for the 2015 CD release of "Deliverance & Damnation" on Discogs.

View credits, reviews, tracks and shop for the 2011 CD release of "Heritage" on Discogs.

View credits, reviews, tracks and shop for the 2014 CD release of "Pale Communion" on Discogs.

I didn't know about the DVDs in that re-release of Damnation and Deliverance.

AYanguas said:
The next two 5.1 Opeth Albums were not mixed by Steven Wilson and they are clearly mixes of an inferior quality.
2016-Sorceress seems to be an upmix and 2019-In Cauda Venenum, although a little better, not as good as the previous three mixed by Steven Wilson.
Click to expand...

I think In Cauda Venenum is better than it gets credit for--it's a 4.1 mix with plenty of discrete activity in the rears ("The Garroter" in particular has pretty extreme separation of instruments).

Porcupine Tree were a recommendation from fellow nerds about 16 years ago; before I discovered surround sound. In Absentia was my first album; in modest CD format. I have never really been crazy into PT but the surround mixes are obviously great.

I have been pretty successful turning people onto PT and Steven Wilson over the years.
And why not? it’s pretty awesome progressive rock music and he has never had a bum album as far as I’m concerned. Over 20 years of excellence and awesome concerts!

No, the opposite.
Found a stereo copy of The Sky Moves Sideways in an HMV discount bin, gotta be 15 years ago at least.
Knew the name but not their music, bought it anyway.
Great album.
Gave me the confidence to start buying the surround albums when they came out later

CoMiGa said:
I am curious what Opeth DVD-A and/or BD you are referencing as I thought Steven never did any surround for Opeth.

I never heard of the Japanese mini-lps before and now I need to pretend I never did because they don't look all that affordable to start trying to collect. I believe I have the DVD-A/BD for all of the Porcupine Tree and Steven Wilson releases. I wish they would do just BD releases for the Tull as I don't want to buy the boxsets just for the BD, and now most are just coming with DVDs which is disappointing.
Click to expand...

Sorry for the delay, I saw some othe people answered to this question. Beside that, I think SW got involved in the production an stereo mixing of some other Opeth's albums, I can't remember what of them now. And Bruce Soord did some other 5.1 remixes. For me Opeth is one of those bands you will always be able to find quality in any of the records.

About Jethro Tull, I suppose that when SW began to remix their albums, BD-Audios weren't so popular as they are nowadays and they decided to keep the same book format for all of them. Something similar with King Crimson and the DVD-Audios production.

And about the mini-lp editions I recognize it's more a freaky collector hobby than a sound matter. I think they're really nice. The first albums I bought from Porcupine Tree were their DVD-Audio, from Stupind Dream to Fear Of A Blank Planet, but I wanted their first albums too so I decided to buy the Japanese editions because I could find them not too expensive at Ebay and almost all of them had extra tracks and bonus CDs. Once I had all of them, some reissues of their DVD-Audio were published (IEZP-54/58), they were cheaper than first editions (IEZP-7/11) and the Euro/Yen exchange was really good at that time. I only had the DVD-Audio editions, not the CDs, So I decided to make me a Christmas present. 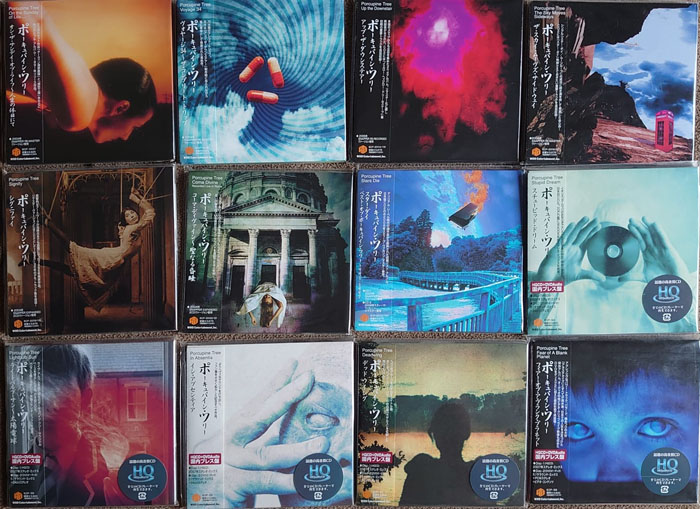 I bought one of their albums back some 30 years ago and have been listening to them ever since........I met the band and got their autographs[minus the keyboard player who was setting up their equipment at Martyrs at the time]at their first in store performance at Vintage Vinyl in Evanston back in 99.
Last edited: Apr 29, 2021
J

Kinda got into them concurrently while (re)discovering Quad. Ie Had some quad albums back in the day but did not have a quad system to play them on...
Friend of mine turned me on to Lightbulb Sun and Stupid Dream as I discovered QQ. I subsequently bought the DVDA reissues along with the other Porcupine Tree releases.

hwkn said:
I bought one of their albums back some 30 years ago and have been listening to them ever since........I met the band and got their autographs[minus the keyboard player who was setting up their equipment at Martyrs at the time]at their first in store performance at Vintage Vinyl in Evanston back in 98.
Click to expand...

I was at that show at Martyr's in Chicago, which I believe was in 1999. Was just starting to get into them. I even got to shake Steven's hand as they exited the venue. Little did I know how big he would become! (Well, relatively.)
H

Yes it was in 99 when Stupid Dream was released[I had them sign the cd case at Vintage Vinyl].

I was browsing ebay 'bout 15 years ago and kept seeing DVDA titles for this band called Porcupine Tree (never heard of them prior to that). I finally relented and did a quick google search and thought this sounds like something I'd be interested in.

I can't remember the first title but I was instantly impressed with both the surround mix and the music. I quickly bought the other surround titles available at the time and of course any subsequent releases from both the band and Mr. Wilson himself.
F

The drummer in my band at the time (about 2005) was big into PT, and that was my introduction. I liked the earlier, more-Floyd-ish stuff, and also the bent towards more metal influences on the IA album and thereafter. It was at some point after that where I saw the IA DVD in the Best Buy music racks and bought it, thinking, "Oh that might be cool to hear it that way." I had long been a fan of 5.1 movies and had a system setup for that, much to the chagrin of my neighbors below when I lived in an upstairs apartment. Oh how I miss the days of coming home from the bar and throwing on Saving Private Ryan at 2am.

fetchmybeer said:
Oh how I miss the days of coming home from the bar and throwing on Saving Private Ryan at 2am.
Click to expand...

Why do you no longer experience them.
F

Sal1950 said:
Why do you no longer experience them.
Click to expand...

Got married, had a kid. Plus, once you get to a certain age, the prospect of staying up late and/or dealing with the hangovers associated with said bars loses its appeal.

I don't know why PT stayed off my radar for so long...but it was all the talk on here about their surround releases that piqued my curiosity I suppose.
And at first it was more the music, the overall sound, that grabbed me....getting into the lyrics came a bit afterward. They managed to explore teenage angst and drug abuse with some thoughtful yet catchy lyrics. "stoned in the mall the kids play, and in this way wish away each day". At first I took it all as social commentary but now I wonder...well whatever the reason I'm glad to have made their musical acquaintance.
And my ashes find a way beyond the fog
And return to save the child that I forgot

fetchmybeer said:
Got married, had a kid. Plus, once you get to a certain age, the prospect of staying up late and/or dealing with the hangovers associated with said bars loses its appeal.
Click to expand...

Brother, that's the definition of growing old.
"Do not go gentle into that good night,
Old age should burn and rave at close of day;
Rage, rage against the dying of the light."

I knew Steven Wilson for the remixes of other bands record but never paid too much attention to Porcupine Tree.

Finally I ended up loving them. The way SW creates music thinking about it in surround takes it to another dimension

In ‘99 a coworker had a couple of boxes full of progressive rock CDs a friend of his wanted to unload. Surprisingly, he allowed me to take them home and give them a spin. I spent a few weeks checking them out and really liked one in particular - Signify by a band called Porcupine Tree. I then bought IA when it was first released on CD. Totally loved it.

My personal surround journey had already begun, so I was super excited to hear that IA was coming out on DVD-A, because I thought it sounded amazing in stereo. I remember calling my local Circuit City on the day of its release to reserve a copy for me to pickup on my way home from work. Thought I’d died and gone to heaven when I got home and gave it a listen!
You must log in or register to reply here.