As I've mentioned in a couple of other threads, both my Oppo 103 and AVR have kicked the bucket in the last year so I'm trying to clear out some of my duplicate and unwanted quad stuff and turn it in to some money to help me finance the purchase of new (hopefully Atmos-ready) equipment, along with some new speakers that don't make everything sound like crap

So, I have the following tapes for sale - I haven't listed any prices but I'd be looking for something in the ballpark of 10% less than eBay prices, although I'll consider further discounts if you're interested in enough tapes to make it worth my while. I have enough spare shipping material that I won't charge anything for that, and shipping will be charged at whatever the exact rate that the Canada Post shipping calculator provides. Items are located in the vicinity of Toronto, ON if that makes a difference to anyone.

Tapes are sold as-is (the majority haven't been played since most are duplicates or unwanted) but I may willing to open and inspect, and possibly re-splice for a small fee that reflects the amount of, time it takes to do so.

In the next few days I'll also be listing a handful of quad LPs (including a couple of Japanese CD-4s) and a few digital discs as well, but I figured I'd do that in seperate threads to keep everything simple.

Inquiries via private message, please. Photos of everything are available at the end of this post. 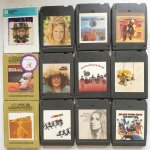 Would you have any other Q8 tapes for sale?

Would you have any other Q8 tapes for sale?
Click to expand...

Trying, once again, to thin out my collection of Q8 tapes - prices are somewhat negotiable, (especially for bulk buys) but everything here is priced lower than what you'd currently pay on eBay. America 'Hearts' $15 Argent 'In Deep' $20 Art Garfunkel 'Angel Clare' $15 Barbra Streisand 'Live...

I have many other tapes in my collection that aren't really for sale, but if you're looking for something specific and can make me an offer I can't refuse, I might consider it.
You must log in or register to reply here.

A
8 track quad tapes for sale