QQ Member 'popshop', Ian Dougherty, has graciously offered a copy of the new Ian Cooke release - The Flight I Flew - on CD/DVD as a QQ Door Prize 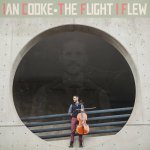 Respond once to this thread (all subsequent posts will be deleted, so no commenting please), and we will use the magic QQ Excel Random Number Generator to pick the winner by post number sometime Sunday Evening, October 22, 2017. Ian will ship the discs directly to the winner. Drawing is open to all members and mods.

For more info on this release, check out https://iancooke.bandcamp.com/
For the lyric video here's a YouTube link: https://youtu.be/wF1bKATxo2I

Here's a blurb about the album, and credits:

Ian Cooke's fourth release, The Flight I Flew, is a full-circle album that began with The Fall I Fell, his premiere work from 10 years earlier. These new cosmos-inspired songs transcend from the unrequited love songs of his debut album to the personal struggle with love lost and then refound. Showcasing Cooke's signature cello, piano, and voice, this progressive folk pop album illustrates a battle with inner demons which led to an awakening of self and a realization of love.

If the UK is OK for this wonderful prize, count me in please. Thanks!

As another Ian, I'm in, too, please. Thanks Ian!

Count me in please. Thanks!

Please count me in.

Cool.
Let me in, please!

Me also when you spin the wheel.

Very Groovy, put my name in the hopper and thank you!

I'd love to take a shot at this, thankyouverymuch!

Count me in please, Thanks!