I've been fairly vocal on here about my dissatisfaction with the matrix decoding of my QRX-9001, and I'd just like to say that it may be early but I seem to have found my solution. Having recently brought my 9001 in to the shop, having had some connection troubles repaired and the double sided board re-capped while he was at it, my tech asked me if i was interested in any of the mods from QRXRESTORE.com (R.I.P. Jim). And of course after a little research I happily agreed to having the three blend resistors removed as well as the "Holy Grail Alignment" performed. I've only spent a single night with it, but having listened to the entirety of Quadrafile, comparing the SQ, QS and CD-4 sides, as well as a minute or two of each Sextant and Aerosmith's Rocks at the end of the night, just to confirm it wasn't just the exquisite quality of the Quadrafile disks and mixing that misled me, I feel that my life with matrix quad has been reborn! I was BLOWN away. Actually noticeable separation and a legitimate sound-field were created using the SQ decoder. I was even more impressed by the QS decoder, but I had my thoughts it was doing an okay job before. This has me feeling as if all the matrix quad listening I'd done before was a waste (indiscernible messy semi-"sound-fields") of time and that its time to revisit the collection with a fresh perspective! Between member sstevee00 and I we've got quite the collection to revisit. Some first visits that come to mind that never quite got their due are The Cosmic Jokers and Galactic Supermarket by The Cosmic Jokers as well as Inventions for Electric Guitar by Manuel Gottsching. A (very) quick (and single minded) list:
The Cosmic Jokers - The Cosmic Jokers
The Cosmic Jokers - Galactic Supermarket
Eberhard Schoener - Meditation
Harry Partch - The World Of Harry Partch
John Keating - Space Experience
Message (3) - From Books And Dreams
Mythos (4) - Dreamlab
Omega (5) - 200 Years After The Last War
Stomu Yamash'ta - Red Buddha
Popol Vuh - In Den Gärten Pharaos
Klaus Schulze - Irrlicht
Klaus Schulze - Cyborg

Some of these, among other, Kraut releases have been somewhat iffy on whether or not they were actually encoded in quad. I feel that, now with this upgrade, I may be able to make a better judgement of my own. I'm very open to additional cool quad music suggestions, though I do find I often don't have quite the typical "classic rock" taste of most members here.

Anyway, I'll check back in at some point to confirm whether or not things have improved as much as they seem initially.

I guessed I missed this. When did Jim pass away? That is so sad. I have a full up round QRX 999 restored by Jim with the Holy grail and other stuff done. Hey/they do fantastic work, but I currently am having a problem with my phono input. One side is higher volume than the other, even though the VU meters show the levels are equal. Anyone have an idea about that?

I just came back from a trip up to QRXRestore to have my QRX9001 refurbished. Can't wait to get it back! I've been using a 7001 which has been great . But the 9001 is the top! Shaking hands with Jim's son at the shop. 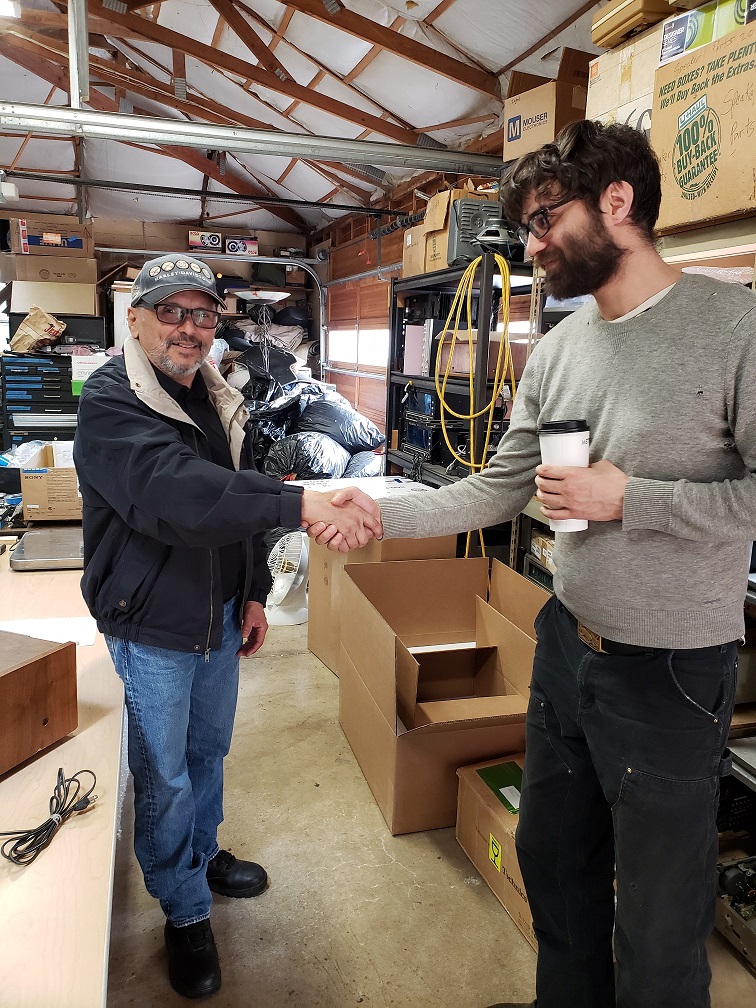