J. PUPSTER said:
It is sort of a PG-13 screen shot I guess, but since it's about the music, start the play, turn off the screen... and "Listen To The Music!"
Click to expand...

No doubt. I’ve never understood this thing 70s musicians had with thinking so many fans wanted to see them in various stages of undressed.
F

keywhiz said:
not sure I want to look at a UHD shot of John Hartmann’s massive thigh on my 65” screen for 40 minutes though.
Click to expand...

At least you're not paying for it by the pound, Whiz! 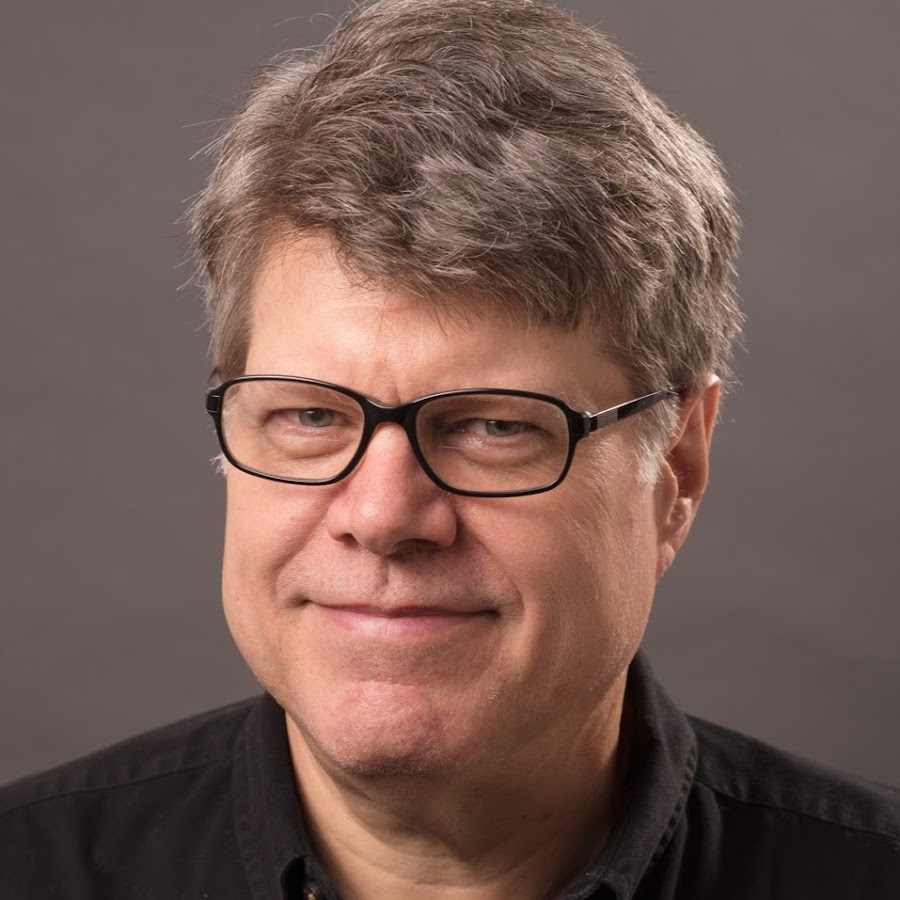 Whoa, late to the party. Looks amazing! Thanks to ForagingRhino, Jon, and anyone and everyone involved in this release. It is more than a grail-shaped beacon - it is now a grail! Very much looking forward to this one!


Why they could even be the artist's in the Zap Comix Collective
Click to expand...

Funny. I was just talking to my wife a few days ago about missing my old "underground" comics; Zap/FFFreak Bros, etc etc R Crumb Etc. And now mentions by both you and Quad Linda. Super!

Thanks so much Jon for showing us what's coming. Got no order made yet but I will....I will.

JonUrban said:
Can I just interject here for a moment, you know, interrupt the obvious joy filling the place.

It's just that sometimes we, as a collective, the QQ membership, get all flustered and annoyed and sometimes go overboard when it comes to beating on "The Labels", or the industry, when we don't get the quad reissues or new 5.1 stuff we want, or hear about, or even might know is there. Hey, I've done it at times here. It's easy to do.

The few industry folks that are brave enough to create accounts and login here to interact with us, those guys are very special types. They are a LOT like us, want the same things we want, yet they are only employees of super large corporations. We are to that industry guy as he is to the chairman of his company. Mostly Harmless.

We want stuff, and most of the time, industry guys like Universal's "Jimby" (who no longer posts here), John Hughes (from Rhino), Steve Woolard and others, these guys want this stuff out, almost as badly as we do - but they cannot do it on their own,

Yet sometimes when they attempt to interface with the public, we take an adversarial position with them like it's their personal decision that will make or break a release. We want the Eagles so why can't we have them? Well, Steve or John or Jimby probably want the Eagles just as much as we do, but no matter how bad we want them, or how hard they try within their company, they just are not going to be available, for a myriad of reasons.
It's not their personal fault.

When this release was announced by Steve in a BOLD MOVE, which probably was done out of happiness and after much hard work on the Chicago Quadio, the announced release got delayed - a few times. I have no idea why. We can speculate but we'll never know, because they'll never say.

Still, folks here and around the internet became very negative, despite being told by some that it would be coming out, eventually as opposed to "soon". It's one thing to be disappointed in a delay, it's another to say "F it, it's never coming out. Where can I download the conversions..." or something of that sort. It's even worse to antagonize the poor company guy who comes here to interface with us only to have him get argued with by the masses.

Well, sorry, I am rambling, but the whole point here is that Steve Woolard, aka ForagingRhino, and also Steel Woole, was kind enough to announce this project 2+ years ago, and he came here to tell us about it, and he continued to tell us that yes, it was coming out, and it took a long time. If indeed it never did come out, it would not be his fault, and he'd probably be even more disappointed than we would be.

Well, now it's almost out. I have one. It's real. It's tangible. It sounds great!

This forum owes a very large debt of gratitude to Steve for getting this thing out. I do not know for sure, but I doubt seriously this would have ever made it as far as it did without him. Who knows if it's delays were really cancellations that were somehow salvaged by Steve or others who had an interest in it. Again, we'll never know.

So I would like to send a very strong QQ Thank You to Steve, and I don't want to hear anyone say "Why? He's just doing his job!" Enough of that shit.

This place has been around a long time, and many industry folks have passed through, from Neil Wilkes to Steven Wilson, from Bob Vosgien to Michael Dutton. There are many others who have dropped by as well, but right now, our thanks should go to Steve.

As for the release, it sounds like you would expect it to. I will go into that in detail tomorrow, but for now, as you wait for the box to arrive at your door, take a moment or two to understand how amazing it is that in 2020 we can get four 45+ year old quadraphonic recordings released in a 2020 format so that they can sound light years better than they ever could have sounded when they were released. And wonder at the astronomical odds that something like this could actually happen, and what kind of behind the scenes work had to be done by people who are a lot like us to make it happen.

OK - Rant over. Now, you can go back to ooggling the above pictures and scans
Click to expand...

Jon,
As a former 'one of those guys', I appreciate the sentiment. We weren't ALL slimeballs .....

curious if anyone knows how the preorders are selling? If this could somehow go OOP before the actual release date, I suspect more companies will get off their asses and release more packages...

Tubelicious said:
curious if anyone knows how the preorders are selling? If this could somehow go OOP before the actual release date, I suspect more companies will get off their asses and release more packages...

Oh wow I hope they don't go OOP before I can order. Just had several things come up lately that demand cash and I might be closer to first week September ordering. Think I'll be OK though.

Same here, the veterinarian is getting all my free cash this month
C

Oh it's graphic all right

I like the "new" name "fabulous furry freak brothers"

keywhiz said:
No doubt. I’ve never understood this thing 70s musicians had with thinking so many fans wanted to see them in various stages of undressed.
Click to expand...

Reminds me of how I'd love to have a 5.1 or even quad version of James Gang's BANG . . . but not for the cover

So I've been thinking about the audio. Of course it's perfect. Clear highs, strong lows, no brickwalling whatsoever (on the quad anyway). I mean, these discs sound great. Perfect. I really can't say too many positive things about them without sounding like a shill for crying out loud.

So - instead, our own artist/critic/military hero Mike Vieira (aka EdisonBaggins) will be getting a review copy and will do an unboxing video and one of his excellent "Life in Surround" reviews. He does it WAY better than me, and his ears are better too! So stay tuned, it should not be too long before he goes up with a YouTube video of the unboxing and listening.

Face it, you all ordered it already anyway, so unless I was going to come on here and say it sucked, it really didn't matter what I said.

But, just so that you all don't think I'm shirking my responsibilities, here is a look at the wav files, in this case the first 45 seconds or so of "Listen to the Music" from "Toulouse Street"

You can't tell, but there is NO hiss, NO wow and flutter, NO tape noise, the Quadio is straight from the master, clean as a whistle, and YES, you can CRANK IT!! (You better!)

THIS IS FROM THE BLU RAY

AND HERE IS THE SAME SECTION FROM MY QUAD REEL, INCLUDING THE DOLBY TONES AT THE BEGINNING (Of course, the levels are a function of how I recorded the reel into my PC, but you get the idea) 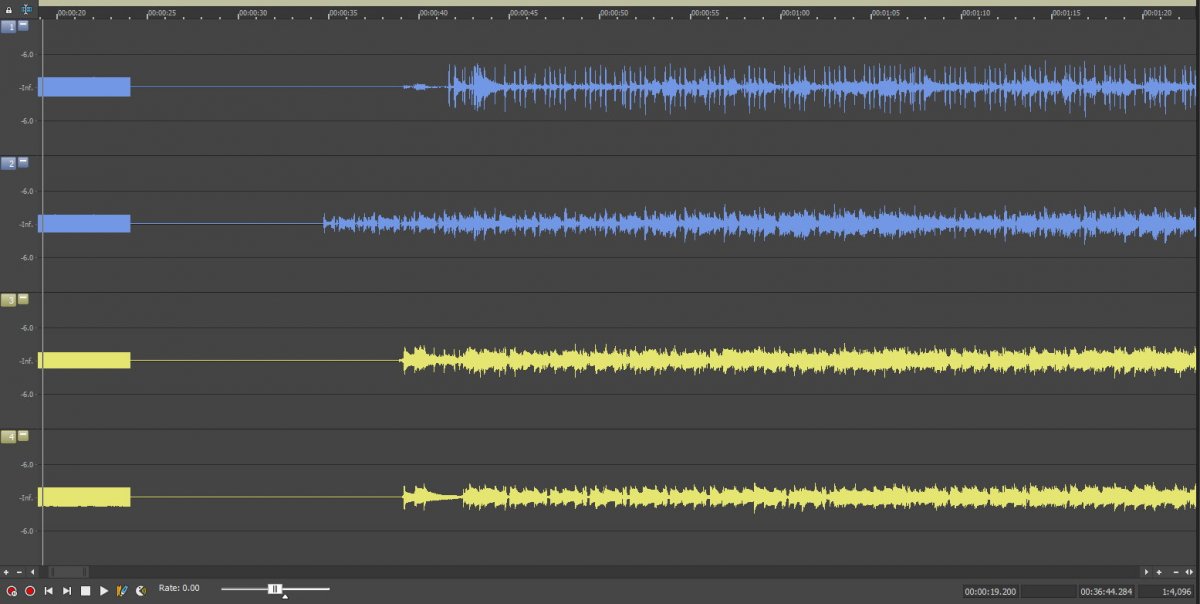 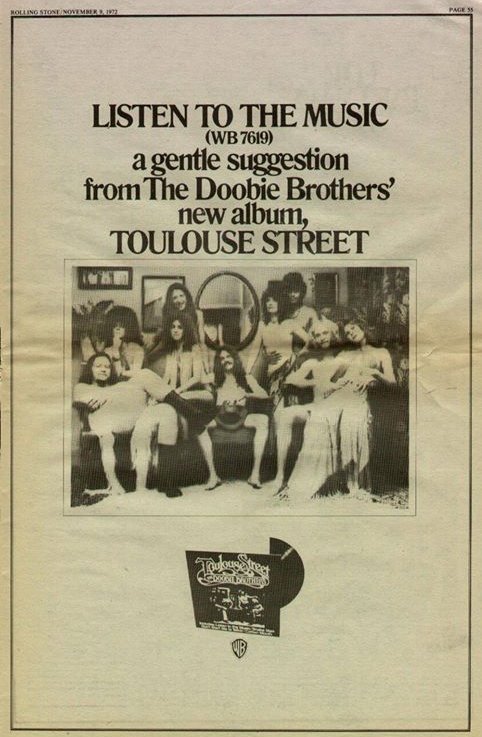 I'll never forget the first time I heard Toulouse Street in Quad. When the rear speakers came to life on the second riff of Listen To The Music, geez! I was expecting the guitar in the left channel, but the bass in the rears! Breathtaking.

Or was the quad LP of that one always on the “street” label?
Click to expand...

Keep in mind that Toulouse Street came out in quad AFTER Captain & Me and Vices were out. So the label in this instance is likely accurate.

I have been a huge Rhino fan from the earliest days even before they became a part of the Warner family. This package is just another example of the great things they do. Thanks to Steve for making it happen. It took two years but it did happen. I cannot wait to get my hands on the box. I still play my Chicago Quadio box all the time. I'm sure this will get the same use.

Also, thanks to Jon for posting the pics. Now it's even harder to wait for.
S

This is going to be great. No surprise on the sound quality....even their early albums had the superb production by the elite combo of Ted and Donn.