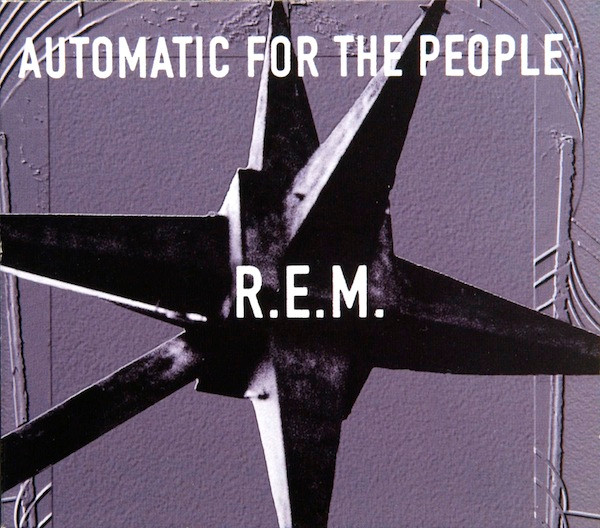 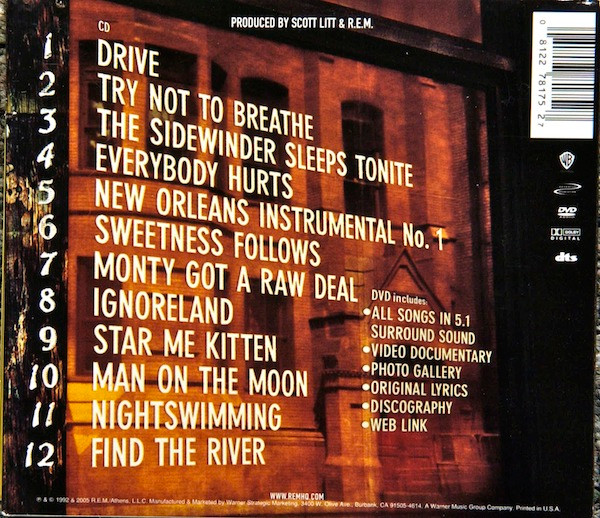 I loved Automatic for the People when it first came out in the early 90’s. IMO, this is easily the best of their Warner Brothers stuff, and among the top 3 of their entire catalog. As far as the surround mix, I only hope the rest of the new double-discs are in this ballpark. Elliot Scheiner’s mix is a winner (as usual), full of beauty, warmth and nuance - - very suitable for the rich, organic instrumentation and personal lyrics, and making elegant use of the surround space. For those not familiar with R.E.M. and wanting to give them a try, this is the one I’d recommend to get first. Note: I own the 2002 Dvd-Audio release, not the new double disc - - I’m assuming they’re the same sound surround disc. Can anyone confirm?

I really liked this DVD-A. I have the single disc version. I thought the surrounds were used just perfectly. I used to play this DVDa when cleaning house, but found I always ended up sitting in the sweet spot just enjoying the music instead of cleaning.

bugdaddy said:
Note: I own the 2002 Dvd-Audio release, not the new double disc - - I’m assuming they’re the same sound surround disc. Can anyone confirm?
Click to expand...

Yes, they're the same discs as the original DVD-A releases. It's just Warner's lower-cost (and greatly preferable) answer to "Dualdisc"

Thumbs Up for this one for sure. Great mix.
A

I own R.E.M.'s entire catalog and, though I don't place this album in their top five, the mix is great, the sonics are great, and well, this disc is a revelation for those who have only heard the CD or vinyl. Highly recommended. 10.

Finally found a sealed copy on Amazon for $20 and jumped on it... fantastic album, one of their best, and the mix and sonics are fantastic. A "10" all the way. (But you already knew that.)

I've finally snagged myself a copy of this masterpiece and yet again, Elliot Scheiner has excelled himself. My only quibble is that in the intro to "Try Not To Breathe", just as the instrumentation comes in over the percussion, it seems like the disc skips. In fact, it is best described as something getting stuck and then playing catch up. It lasts a split second but is noticeable and clearly an error as it doesn't occur in the 2 channel mix. I've verified this with other owners of this disc.

Nonetheless, this perfect in every single way

This was one of the first DVD-As that I got... and still remains one of my favourites.

I also think Elliot put a bit more effort into this than some of the mixes that he did later....just my view though.

I must admit that I hadn't really noticed the issue on "Try Not To Breathe", but after Rob pointed it out, it is really noticeable..

the surround mix is mostly great but (from memory, not played it for a while) there a couple of tracks where the bass seems to have less oomph than the stereo mixes.. though this may be due to mastering and the stereo has had low-end boosts, etc.. anybody else experience/notice this?

fredblue said:
.. anybody else experience/notice this?
Click to expand...

Yes, I was just listening to it last week and found it disappointing in the low end -- though I had just been listening to the "Raven" before that.

Not a huge R.E.M. fan, but this is one of their best albums. Immersive and warm. Impressed they decided to reissue their catalog in surround.

Not my favourite R.E.M. album, but the high points are very high.

The lyrics show up while the tracks play on the DVD-A layer, but sadly not the DVD-V layer, where they are - for some reason - stored in a separate menu without the accompanying audio!

Drive: Excellent. Good use of space, and there seem to be some elements with greater emphasis than the stereo mix - in a good way too.

Try Not to Breathe Okay. There's the strange percussion mis-timing on the intro. Michael's vocal is over exposed and phasey. Never a favourite, so there's little recollection of the stereo mix to compare it to. Mike's backing vocal level really drops as it pans across the rears.

The Sidewinder Sleeps Tonite Verging on poor. Like Stand, Get Up, and Shiny Happy People, it sounds over basic. Stuff is far too low in the mix, and it lacks cohesion. Backing vocals mix sounds over isolated. I found the track actually dragged with this mix, although I liked the pizzicato strings in the rears. Sounds like a rough mix.

Everybody Hurts Very good. Didn't quite reach excellent for me, not sure why - might be the balance levels of the strings and vocals in places...

Sweetness Follows Very good. I've hardly played this at all in stereo over the last 20 odd years, so I'm taking this at face value rather than comparing to the stereo mix.

Monty Got A Raw Deal Excellent. I've not listened to the stereo mix much, but not bottom of the list like Sweetness Follows. Definitely a different feel to the stereo mix, but I'm liking it a lot. Nice bass, and I like what ES has done with the drums too. Room filling. A nice surprise.

Ignoreland Very good. Another that I don't listen to much, less than Monty, possibly more than Sweetness. Different to how I remember it - I don't recall the harmonica on the intro.

Star Me Kitten Very good. Clearly not the intended title if you look at the lyrics. Again down down the bottom with Sweetness Follows, so taken at face/ear value. I like the vocal/ (sampled/vocodered) backing vocal balance, and as a whole it seems to work well.

Man on the Moon Not very good. Uh-oh, this feels quite different. The vocals feel over exposed in places to me. I'm hearing backing vox on the first verse I haven't noticed before which I like(I haven't heard this on a half decent stereo for years) - but Mike's backing vocals are almost gone on the pre-chorus, and also too far back on the chorus. Mix on middle eight sounds a bit clumsy compared to the stereo, and into next verse the vocal mix just isn't working for me. I don't like the guitar solo section either. This loses the cohesion of the stereo mix. Verging on Get Up territory.

Nightswimming Very good. Sounds nice and generally faithful to the stereo mix in feel, although the lead vocal mix jars a bit at one point. Cohesive mix, with the strings sounding nice in the rears.

Find the River Good, let down my the lead vocal mix/balance. Some subtle organ more prominent in the mix, verses sound great, although the vocal is a bit phasey, a bit boxey and too high in the mix for me, and lets down the choruses.

A longer period before the intrusive menu audio comes back on.

just upgraded my sys to B&W CM5 S2 Fronts (Bi-amped) and I'm hearing things I've never heard before, and I've listened to this disc quite a bit over the years

Some say this album is not "true" R.E.M because it's not "Pop" but that's what makes it great for me. I love their Pop songs but I also love the fact that they are great musician's, similar to Tom Petty and the Heartbreakers. The Heartbreakers also have great "Pop" but so much more depth when you really dig down, especially with a system that can "Reveal" such.

and what can I say, I've always been in love with Michael's voice

Picked this up after reading through Bluray thread as I have a 5.1 setup and . I have long enjoyed REM and loved this album back in the day. I was somewhat worried as I own the In Time DVD-A and really don't care for it - or the Automatic For The People selections on it. However, I am glad I made this purchase - the mix is great and I've enjoyed hearing some of these great songs have new life for me. It's a 9 for me.
M

Though this was one of their most popular releases and, for that reason, some dismiss this album, I think it's their best. Every other REM album (to me, at least) has at least one or two throwaway tracks. But not so on AFTP. Elliot Scheiner's mix is (as almost always) superb. The surround format really brings out some nuances in the music, particularly where John Paul Jones' (yes, that one) orchestral scores are concerned. Also, there is some really exquisite feedback guitar work provided by Mr. Peter Buck. It's an odd juxtaposition with the most acoustic material; but it works (think Velvet Underground). The guitar feedback squalls on this disc sound amazing. Great separation and great songs make this one a 9 for me. It's not perfect, but it's excellent all the same.
You must log in or register to reply here.