There's been a bit of chatter over what possible surround mixing can be done on the pre Sgt Pepper Beatles albums. This has come after comments in a couple of recent articles by Giles Martin. The comments in the Let It Be poll thread in particular are very interesting but should probably feature in a thread of their own, so here we are.

"Again, there is little difference between Pepper and Revolver except fewer stems. They both have similar co-mingled pre-bounce stems - except Revolver was limited to one generation of bounces and thus fewer elements to work with.

Of course, if combined elements could be isolated transparently, that would give the mixer more to work with. But that’s true with even with some Abbey Road stuff. The bigger problem IMO with earlier albums is more the lack of elements regardless, not the isolation (or lack thereof) of them.

Taxman is just the worst example because the entire rhythm section is entirely on one stem - and the other 4 pre-bounce stems mostly consist of some guitar, vocals and the “Mr. Wilson, Mr. Heath“ bit. But even if you isolate the bass, drums & rhythm guitar, you still don’t have much to work with."

Taxman is typical of recordings from the Revolver album in its approach to bounce-downs and track allocations. Here's a diagram from Jerry Hammack's excellent "The Beatles Recording Reference Manual Volume 2 (Help! through Revolver)" from 2018. 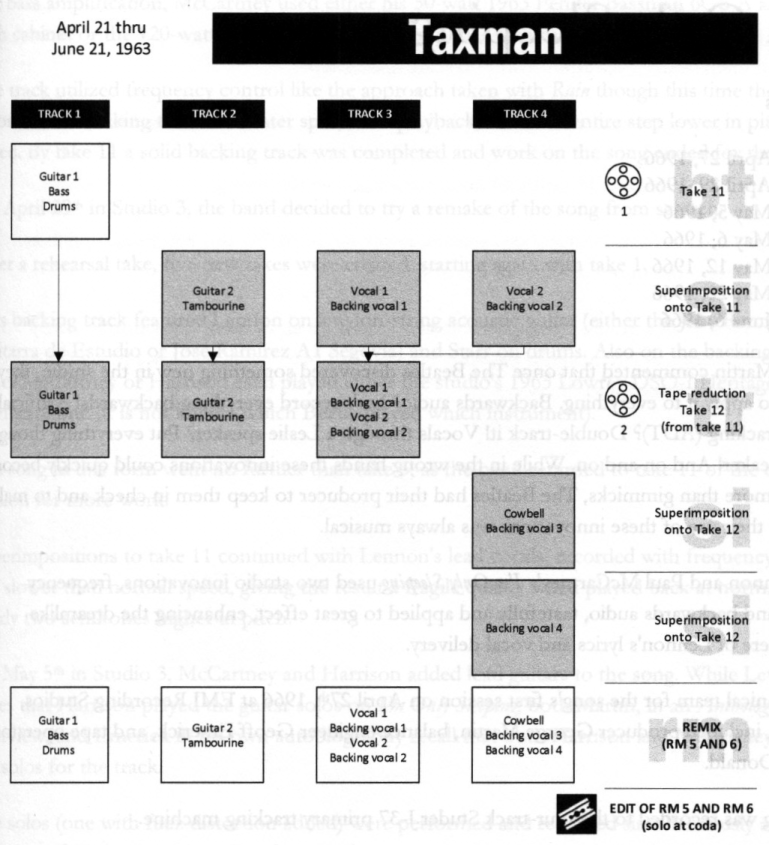 Following the track allocations from top to bottom shows the contents of each of the four tracks through the progression of the recording.

So the original 'best' take consisted of just Guitar, Bass & Drums on track 1 only. Following this you can see the superimpositions added to tracks 2,3 & 4.

There is then one tape reduction combining tracks 3 & 4 onto track 3 of a new 4 track tape. To this further superimpositions were added to track 4 of the new tape adding Cowbell & two sets of backing vocals. This second tape then contained all elements that were used to make the stereo master.

Given that they have access to the pre-bouncedown tape as well as the final 4 track tape the individual elements available for a surround mix would be:

I guess the "de-mixing" technology Giles talks about would enable him to do things like split the three elements of track 1, but he does express doubts as to whether the technology is up to it just yet. On the other hand Steven Wilson was able to work wonders on the 4 track of Jethro Tull's "This Was".

Thanks for pointing out this reference. I did not know that this information was so readily available. On Amazon for $35 for each volume: