Riperton's follow-up to her 1974 smash Perfect Angel, Adventures in Paradise was released in both stereo and quad in the summer of 1975. Co-produced by Riperton and her husband Richard Rudolph with Stewart Levine (who produced all of the Crusaders albums through 1977's Free as the Wind) the album sees him bringing in Joe Sample and Larry Carlton from that band, along with session aces including Dean Parks and Jim Gordon (both known for their work with Steely Dan) and sax players Tom Scott and Jim Horn. The album also saw Riperton and Rudolph collaborating with the underrated Leon Ware (who penned almost all of Marvin Gaye's 1976 album I Want You) on three tracks, including the slow-burning first single from the album, Inside My Love. 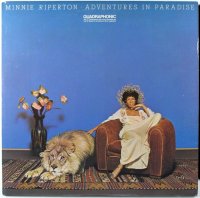 One of my favorite ‘never would have bought it or heard of it if not for quad’ discoveries. I have no idea how well regarded it is amongst her wider catalog, but I really dig this album. The overall mood is a bit somber, but there are some funky upbeat tunes sprinkled throughout and the production is lush and sophisticated. I’m not surprised to see a lot of Steely Dan alums played on this as the performances are spot-on. Minnie does some really amazing stuff with her voice as well - the high note at the end of the chorus in "Inside My Love" blows my mind every time I hear it.

This is another CBS quad mix that places the drum kit in rear right and bass guitar in rear left. I know a lot of people don’t care for this mixing style, but it doesn’t bother me too much and I like being able to zero in on exactly what the bass player's doing. There’s all kinds of other elements in the rears as well - horns, strings, piano, keys, sax, rhythm guitar, etc. Standout moments for me include the demo-worthy intro to “When It Comes Down To It”, where each instrument enters from a different corner (drums in rear right, bass in rear left, guitar in front right, and piano in front left) and the sax solo blasting from left rear in “Feelin' That Your Feelin's Right”.

Though the SQ LP is pretty good, this is one of those cases where the Q8 sounds quite a bit different - almost too extreme at times (I posted some samples comparing the rear channels here).

Going with a “9” overall. Feels redundant to say at this point, but I’d love to get this on a modern format someday.

As a side-note, I found this interesting blurb from the album's Wikipedia article. What a shame this never happened...

Epic Records anticipated a soul funky sequel, using Family Stone and Tower Of Power horn section, which would have been released in November 1975. However, the sessions were never released due to legal issues.
Click to expand...