Rufus's third LP, and second release of 1974 (after May's Rags to Rufus), Rufusized was released in stereo in December of that year and in quad in early 1975. A top-10 hit on both the pop and R&B charts, the album produced the hit single Once You Get Started, written by Gavin Christopher, who (in addition to penning three songs for the next Rufus album) would also go on to collaborate with Herbie Hancock on two of his early-80s albums, Monster and Magic Windows. 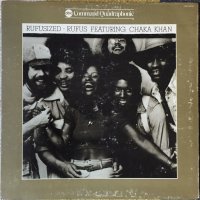 Okay; I'll start. Hard to decide whether I like this album or Rags to Rufus better. This is not factory-produced, assembly-line funk: Khan and the other writers aren't afraid of modulation and jazz voicings, their arrangements are never run-of-the-mill, and even though this was their second album in the space of a year, there's very little filler here. (Okay: the soul anthem "Please Pardon Me" doesn't do as much for me as the rest of the album, although it doesn't make me hit the "advance" button, either; same goes for the proto-disco "Stop On By," even if it is Bobby Womack). But everything else is fi-i-ine, from the exuberant opener to the sultry "Your Smile" to the kick-ass "I'm a Woman" to the chooglin "Half Moon." Production and sonics are great, and while I haven't heard the Q8, I think the Command Quadraphonic gets a respectable amount of separation. 10 for content, 9 for sound, 8 for mix. "9" overall.
Last edited: Nov 12, 2021
You must log in or register to reply here.
Share:
Facebook Twitter Reddit Pinterest Tumblr WhatsApp Email Link