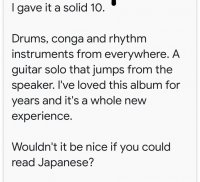 I now stand corrected Santana is a 10 for sure but Abraxas is a 12......I've only ever heard the Stereo version and this is like something I've never ever heard and absolutely LOVE LOVE LOVE it!!!! Talk about no LOUDNESS WARS WOWEEEE!!!!!! Sends chills through my whole body!!!!!!!!!!!!!!!!

musicmemorabiliashoppellc said:
I now stand corrected Santana is a 10 for sure but Abraxas is a 12......I've only ever heard the Stereo version and this is like something I've never ever heard and absolutely LOVE LOVE LOVE it!!!! Talk about no LOUDNESS WARS WOWEEEE!!!!!! Sends chills through my whole body!!!!!!!!!!!!!!!!
Click to expand...

SOUNDS LIKE THE SPACEWARP PLANET WILL NEVER BE QUITE THE SAME!

4-earredwonder said:
SOUNDS LIKE THE SPACEWARP PLANET WILL NEVER BE THE SAME!

OMG you got that right buddy!!!

Greg Z said:
The original album in stereo was a masterpiece. Now, having it in its original quad mix with the fidelity of SACD
is just a dream come true. The packaging of these Japanese releases is also fantastic. I wish I could read japanese though.
An easy 10.
Click to expand...

On my phone I use a little app called Photo Translator. With the app you take a picture (optionally crop the image to reduce the 'noise') and then it scans, recognizes the language and translates the content. The app has a lot of pop-up adds which you need to navigate through. But it works fine and is a tremedous help when shopping in asian food departments .

Abraxas arrived earlier today. Of course, the first thing I did was ripping the disc. I'm one of those, I can't resist .

I've only sampled four tracks so far, and I like what I'm hearing. Fidelity is great compared to the previous rip I had, even though it's not great in absolute terms. I find the bass to be tighter on the stereo mix. For the mix itself, panning is extreme on this one. It's not the first time I listen to it, but I'm not sure I like such an extreme panning. The entire solo in Samba Pa Ti comes from the FR channel, and I would have preferred it more centred (or not so extremely panned on the right). The beginning of Black Magic Woman is great. Se Acabó is also great. I'll have to listen to the entire album a few times before casting a vote, but I'm happy so far. Packaging is also great.

I was also surprised by the stereo remaster (the SACD layer). I have the 1991 MFSL as my go-to version. I am aware there are other favourite versions amongst members at SHF, but I'm very happy with that CD. The stereo remaster on this SACD doesn't differ too much to be honest, even though it's a tad warmer (fewer mids/highs). I think I prefer the MFSL, but this stereo remaster is a great alternative (from a quick A/B comparison.

This is an order of magnitude better than the previous Satana SACD quad. If we need that extra push over the cliff, you know what we do? Put it up to eleven.

I had the DTS/CD (which I just managed to sell prior to this release), and all I can say is there’s just no reason anyone should ever purchase another copy of that monstrosity again (sorry, whoever bought my copy). Comparing this SACD to a Quad Reel conversion I’ve heard, this has better balance of all the channels and elements (I’m not sure why that would be)... the bass sounds fine to me... not weak enough to require any tinkering, but I can understand how some people might prefer a little more bass prominence. This is a wonderful, discrete classic four-corner quad mix with the best fidelity I’ve heard. Classic music as well. Gorgeous packaging. For me, these Japan 7” releases are the pinnacle of Quad releases and the jewels of my collection. 10.

That's of course the definitive edition and one of the two conversion that can be trashed for extremely good.
Being a early SQ mix, it still suffer from the extreme panning that was done in order to "show that something moves on the soundstage despite 3dB of separation" inherent of early SQ decoders, but i have to say that it seems less echoey of the previous quad releases so far (have it all).

The only problem with these Sony Jap releases is that are not only expensive but very limited quantities, so grab it while you can and before paying collector's price.

Now we have a precise idea of how it can be good a Caravanserai quad sacd next year.

skherbeck said:
For me, these Japan 7” releases are the pinnacle of Quad releases and the jewels of my collection. 10.
Click to expand...

It’s remarks like these that make this forum the most expensive online community I have ever been part of Read this while preparing dinner and listening to both Santana and Abraxas on Spotify. Headed for jpc.de and ordered both SACD’s. Ouch! Thanks for all the recommendations though, keep them coming.
J

4-earredwonder said:
WHY did I give it a 10? Let me COUNT THE WAYS: Finally having the full kilibuck sound of the original 70's QUAD 15 ips MASTERTAPES in gorgeous, lavish, custom 7" packaging with sonics to match is more than ample reason to retire your Columbia SQ Vinyl, Q8s and that ridiculous DTS~CD from the late 90's which bombastically turned this Santana masterpiece into a shrill, bassless mess.

BUY THIS DISC. YOUR EARS AND IMMORTAL SOUL WILL THANK YOU!
Click to expand...

Not much to add to that!
Seems to be spot on mastering. Just exactly like you want.
A pristine copy of the master all the other troubled copies came from. Right out of the spring that feeds the river instead of downstream past the factories.

JNL said:
It’s remarks like these that make this forum the most expensive online community I have ever been part of Read this while preparing dinner and listening to both Santana and Abraxas on Spotify. Headed for jpc.de and ordered both SACD’s. Ouch! Thanks for all the recommendations though, keep them coming.
Click to expand...

You will not regret it, they are both in my opinion in the top ten best surround discs
C

Such an improvement on DTS disc in terms of the heft and presence of the overall auditory impact. But it didn't quite knock me off my seat in the way the Santana disc did. In fact, Abraxas in quad doesn't didn't quite hang together as well at that version of the first album. And, sorry, but the quad mix of Samba Pa Ti remains such a disappointment. The guitar sounds like it was recorded, badly, in another room with the doors closed, and where's the bass? Better than the DTS disc, but it still doesn't gel the way entire first album balances discreteness with integration throughout. Compare the quad Samba Pa Ti with the stereo version on the new disc - the latter blows the 4 speaker version away on every level. So an 8 from me overall.
C

In fact, having listened through a few times now in Quad and Stereo, unlike my experience with first album, I am actually enjoying the stereo version more. Maybe a lot more? Anyone else having a similar reaction? BTW - statement of the obvious - isn't this music just wonderful?

I never listen to the stereo on any MC disc I buy and never will!
C

perzon57 said:
I never listen to the stereo on any MC disc I buy and never will!
Click to expand...

Oh I know - usually the same for me. I just wanted to check how Samba Pa Ti sounded - and was so taken by the improvement that I indulged the stereo on the SACD. And it IS rather wonderful. But don’t be tempted as your ears might win. Ha!!

I voted 10. I have a lot of discs that arrived while rebuilding my rig and going to take awhile to get some votes in but this I have listened to a few times in MCH and once in stereo.
Fortunately I know this music intimately being from San Francisco and all the rage that Carlos brought to SF and then the world.
When I was a freshman in high school my English teacher let me bring my Fleetwood Mac US version LP "English Rose" along with Abraxas to share with the class, I was obviously tricking the class as to who the original band was Peter Green's Fleetwood Mac. Everyone was stunned.
Percy Faith has a Black Magic Woman via Dutton Vocalion 4.0 if you would like to hear the Easy Listening version.

This release brought new sounds to my ears, little things here and there. It amazes me how the Japanese can be soo good at these remix releases. I had the DTS back in 2014 and hated it, where was the bass. This release captures all and then some. The percussion placement was exquisite, Greg Rolie's voice with has little voice noises was superb. I really liked being able to hear the overdubbed guitar tracks, acoustic rhythm rear left and electric lead front right, brilliant.
I have to admit I have received a few surround up mixes over the years, and happy to say ditched them all out of my player as this Abraxas is the only one I will ever need. Glad I have it.

cornwall198 said:
In fact, Abraxas in quad doesn't didn't quite hang together as well at that version of the first album.
Click to expand...

Like @winopener mentioned upthread, it's important to remember that Abraxas was one of the first CBS quad titles and that a lot of the mixing decisions probably had something to do with matrix LP compatibility. The swirling intro to "Black Magic Woman" is somewhat perceptible even with an entry-level SQ decoder. The team responsible for the quad mix (Larry Keyes & Al Lawrence) were not involved in the album's production and weren't given an edict to carefully replicate the balance/panning/effects/EQ of the original stereo mix like Steven Wilson attempts to do today with his 5.1 remixes. That's not to say the quad mix was a rush job, it's just different. I agree with you that the debut album quad mix--also by Keyes & Lawrence--is a bit more refined.

When ever I play Quad disc I set all my speakers to Large and turn of the center channel. I not sure it helps turning it off but I figure there is more power for the 4 speakers left on?

cornwall198 said:
Oh I know - usually the same for me. I just wanted to check how Samba Pa Ti sounded - and was so taken by the improvement that I indulged the stereo on the SACD. And it IS rather wonderful. But don’t be tempted as your ears might win. Ha!!
Click to expand...