Please post your thoughts and comments on this Elektra release from 1975, Carly Simon's "Playing Possum"

Originally available on a CD-4 Quadradisc and Q8 tape 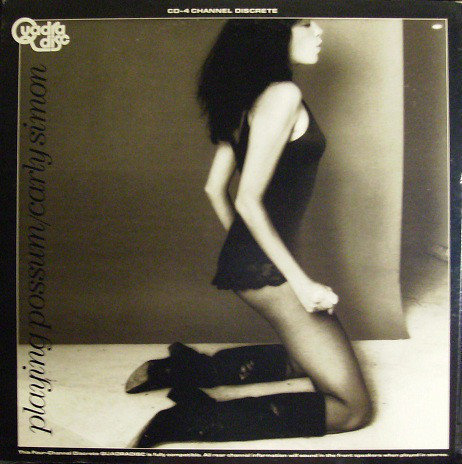 Her fifth studio album, is an album I'd describe as 'Sultry Pop'; which is reinforced by the looks of the cover photo.

The production on this album is by Richard Perry who I know more from the stuff he did with Harry Nilsson. His production style from my experience is with lots of orchestration and some horns etc. (per song style of course) which is present on this as well.
Mastered by Doug Sax at The Mastering Lab.

It generally takes time to get to know an album well, and I'll admit I've only heard this one a few times, so there's probably more I can pull from it with a few more listens. The songs here are mainly about Love and the rocky road of relationships, comfort and defiance and loss.

I felt the overall sound here was very immersive with lots of well placed elements in the rears as well. Sound wise (from the recording) I felt the drums could have used a little more punch/presence though. There was good phantom center presence, especially with vocals, which is something I'm always listening for in these old Quad recordings, as sometimes they just seem to get lost too far back in the mix (or mastering.)
Plenty of great players backing Carly on this one also, as I'll note below.

Some instrument placement I'm hearing in certain songs are as follows:

8: Waterfall
*this sounded like it could have been a Carol King song to me (makes me wonder if she was influenced from hanging out with King on 'Attitude Dancing'.
Acoustic guitars (Carly S. & James Taylor)
*Layered Vocal Harmonies with nice James Taylor vocal movement in the mix, that sounded like it went from Right/Rear to Front and then to the cross field to the Left/Rear.
Electric Guitar (Lee Ritenour)
Drums (Russ Kunkel)
Bass (Leland Sklar)
Clarinet – (Lon Van Eaton)
Flute – (Derrek Van Eaton)

Not sure any of the songs have really grabbed me substantially yet as to their overall staying power, but I believe there are some very nice tunes here to like. With the rich, production qualities of Richard Perry and layered vocals harmonies on many tunes there's a lot to dig into still. And with all the great players on this album, I know I'll be checking it out more with appreciation.

I love the WaterFall song...a real earworm and Russ Kunkel plays fantastic drums on this one

aludra said:
I love the WaterFall song...a real earworm and Russ Kunkel plays fantastic drums on this one
Click to expand...

Yes indeed Mr. aludra; and that makes me think of the old Aristotle saying, “The whole is greater than the sum of its parts."

Which is why it's interesting to catch a moment in time for all these great players, and relate each song back to their style, on their instrument. That then is also affected by the arrangement and the style of the producer, which creates and focusses the imagery that is tied to the wishes of the artist and the poetic story they want to convey. To know something of each musician's style of play (or can learn from it), and combine it with the meaning of the song and how that might emote certain phrasing from that artist for their part in the song, is important IMO.

So that's why I like to include the more recognizable players in a review; sort of a study of the musical artistry of it all.
And when I go back to listen the next time, I'll have those players in mind which helps me better feel the intent of the song.
A

I think that is great the way you're recognizing the musicians and artists and producer as a synergy and in a very poetic way I might add.

I also happen to love the layering of JT's background vocals along with carly's with the clarinet playing on top of them both...brilliant arranging.