It's a one track lp and the sound quality of all the Q8's I've heard are...terrible.... Wings up the front and the orchestra in the rears is not a bad mix for the title song.....apart from that the rest is heavy going...especially when the sound quality is average

I'd have to agree, unless you're a die-hard Bond fan, you're only getting this for the McCartney song. I don't know what it is about the UA/Liberty tapes, but the thing that annoys me the most is the bleed-over - - and it's NOT due to head alignment. There just always seems to be bleed from other instruments in all channels, albiet in varying degrees of volume. Good definition, but could be much more discrete.

I give it a 9, but I'm only rating the title track. Everything else is cheesy elevator music.
P

I agree the title song is the best part but the rest of the album grows on you with time. The bleedthrough (crosstalk) mentioned only seems to be a problem with either white or black carts. I have a number of UA titles with gold carts that have virtually no crosstalk. These are different in design and similar to RCA type.

Philip Spinner said:
I agree the title song is the best part but the rest of the album grows on you with time. The bleedthrough (crosstalk) mentioned only seems to be a problem with either white or black carts. I have a number of UA titles with gold carts that have virtually no crosstalk. These are different in design and similar to RCA type.
Click to expand...

I don't think the cartridge type has anything to do with it. It's not so much crosstalk as just a muddy mix. Similar to the early Guess Who Q8's. Mono all around you. Clear as mud, etc.

Short Take: Well worth seeking out, especially if you are a Bond fan.

OK, so I "grew up" (for better or for worse) on James Bond movies, and Live & Let Die was right is the sweet spot of my early adolescence, at age 11. I saw many of the old Bond movies on the big screen. Always lots of explosive action and tantalizing innuendo. I first owned this soundtrack on an officially released Philips cassette, so the music was more than familiar to me by the time I first heard the quad mix in the 2010s. Yes, VERY late to the quad party!

The conversion of the Q8 I listen to was done by Tab Patterson. He had a Fostex open reel machine which he modified to play Q8 tapes that had been removed from the cart. For those of you who are curious about this setup, here is a good thread:

The fostex was Tab's lab experiment, and I consider that to still be the correct status of it, a lab experiment. I'm not sure of the details of what tab did to modify it, but 2 Q8 heads have been mounted in place of the playback and sync heads on the unit, with one head outputting on outputs...
www.quadraphonicquad.com

Here is also a link from February of 2011 when Tab sold his Fostex to Army Of Quad:

I'm done. Can't do no more. 707 conversions... I am going to be selling off some of my equipment. I think I am getting rid of my custom Fostex "Q8" reel to reel player and probably my Sansui QSD-1. The Fostex was still cranking them out as of last week. I haven't used the QSD-1 in many...
www.quadraphonicquad.com

Tab did many amazing conversions, and I personally owe him my gratitude for the enjoyment he has brought me in the form of preserved classic quad mixes.

OK, so back to the review.

I personally love this soundtrack music, and have no problem listening to the album from start to finish. Someone else here referred to it as "elevator music," and all I can say is that would be one cool elevator! Of course this is all a matter of taste.

Concerning the fidelity, well, firstly it IS from an 8 Track tape, so I am grading on a curve. It's not gonna be 24/96, and we all know that. I would say my conversion has very little hiss - much less than the old 8 Track conversion I had of Dark Side Of The Moon. So fidelity wise I would call it clean for an 8 Track. Even above average. Not sure if this would be true for every source.

As for the mix, Q8 calls it muddy. The words bleedthrough & crosstalk were used. I actually do not believe this to be the case. I think this was "mix choice." By including a small amount of info from the fronts in the rears you shift the position of a given sound to forward of the fronts - more out in the room. True this is less discrete, and not necessarily my preferred choice, but not a technical flaw as seems to be inferred.

The mix itself is adventuresome, with many elements that - while maybe not fully isolated - are clearly placed strongly in one position in the soundfield. Take track 3: Just a Closer Walk With Thee/New Second Line. There is a part where the dixieland funeral all but disappears from the rears. This is where you might really judge the amount of bleedthrough, which ain't much. And then as the song progresses the music moves into the rears to give you the sense of the passing parade (if you know the scene in the movie).

My favorite demo track from this album (yes, I use it as a quad demo) is Baron Samedi's Dance of Death. Super cool percussion!

So to reiterate, I urge you to not overlook this one based on the shrugging reviews above. This is actually a frequent flyer in my Oppo. I gave it an 8, because it is in lesser sound quality. I would LOVE it if Dutton could release this. And I was bummed that the Blu-ray did not include this as a bonus feature. How easy would that have been to do?

Check it out! IF it were in perfect quality I would rate this a 10.
P

So did anyone here win the gold cart that sold on the bay last week.

Philip Spinner said:
So did anyone here win the gold cart that sold on the bay last week.
Click to expand...

Wow. It went for $50 or so. Here are the pictures taken from the listing (for posterity) 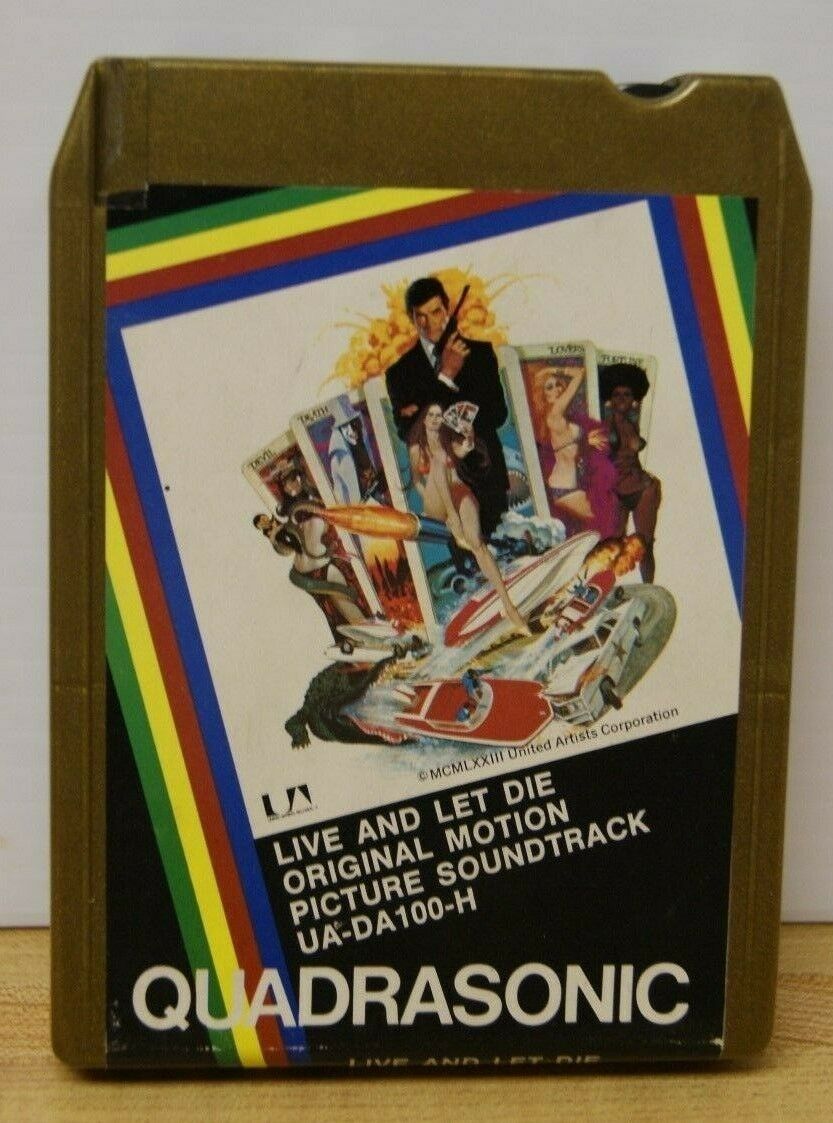 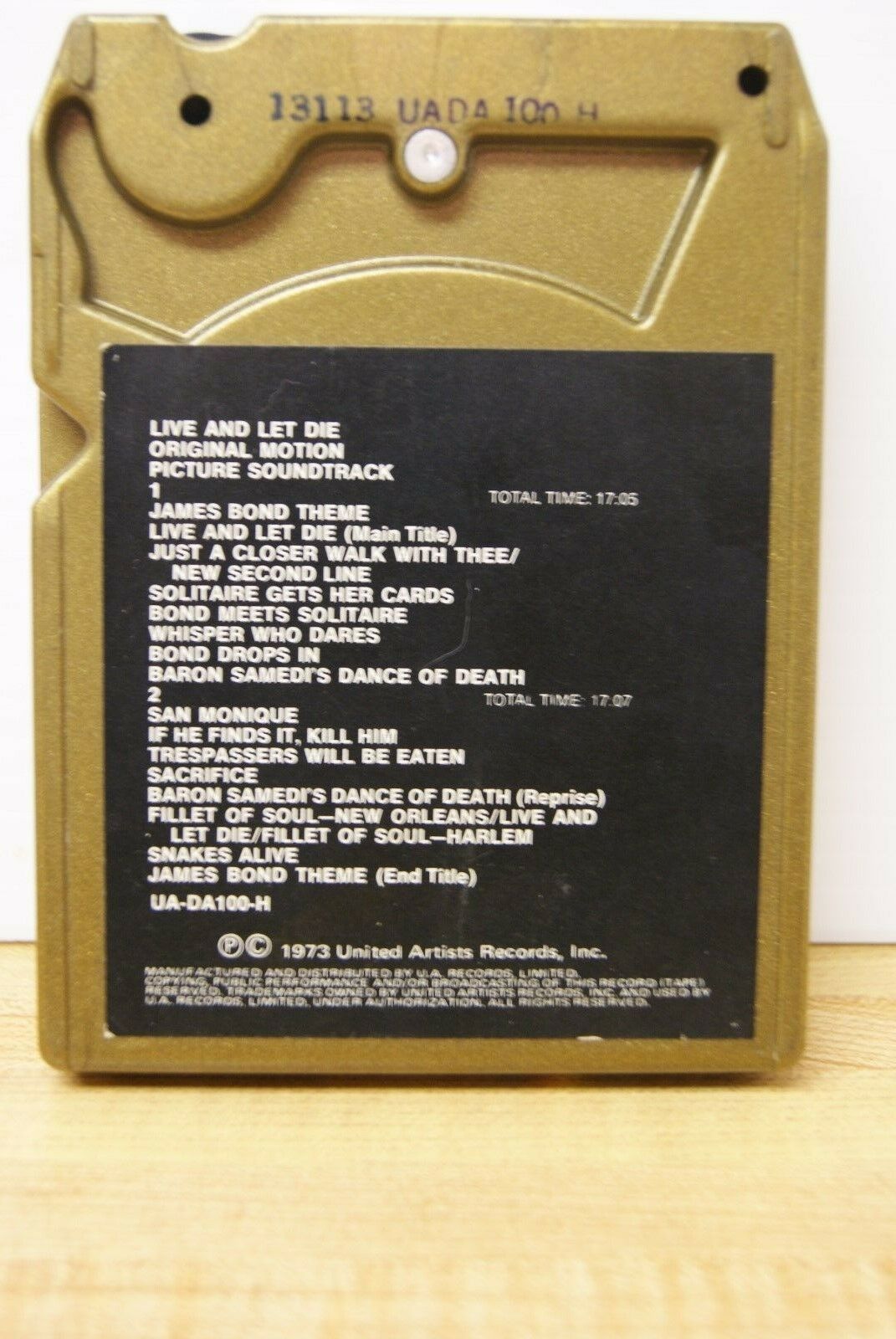 I think that since it's become common knowledge that the Canadian gold carts sound significantly better than the US white/black ones (primarily thanks to chat here on QQ) the prices of the gold shell tapes has escalated significantly. I have two or three that I managed to pick up in the $10-20 range when no one was talking about them, but nowadays I don't think you'll get any of the non-easy listening ones for less th

It's funny, you see these price trends over the years and it only takes a little community like this to make it happen - all it takes for these driven-up prices to occur is two deep pockets collectors or someone who will pay whatever it takes to complete a particular set and you get silly prices. I remember when Tab Patterson lifted the lid on the quality of the Tate decoder with his old website some 15 years ago or so, all of a sudden the price of Tates went through the roof - I sold mine for near enough $900 - and the price of SQ records shot up too. Then when he started doing his Fostex conversions, the price of Q8 tapes shot up as well. There's always something 'trending' as a result of chatter online - for example if Involve did a $50 software VST plugin version of the Surround Master and/or a software CD-4 decoder, I think the price of quad vinyl would shoot up as a result of new adopters suddenly wanting content to run through it.

After hearing how great the shorted, opening credits version of Live And Let Die available on the Blu-ray of the film sounds, the Q8 is even more underwhelming. Although, I doubt the transfer I have was sourced from the gold cart.
D

I purchased a gold cartridge version of this quad 8-track last week (not the one above though) that is in excellent condition and it is the best sounding quad 8-Track I've come across (I have about 20, only 3 or 4 I consider very good sounding). Very clear and no crosstalk at all.

One odd thing though... whilst listening to program A I kept having the urge to turn 90 degrees to the left to listen to it as the tracks didn't seem correct. Did some searching (which is how I discovered this thread) and sure enough there is a mention about this issue (although that person says the problem is with program B, not A). So FL & FR are actually RL & FL, etc. I rewired the outputs of the player and recorded to quad reel-to-reel tape. Program B is normal though so had to put the cables back to finish copying.

Yes the Gold shell Canadian made UA Cartridges were about the best quality of any of the Q8's. I really enjoyed this tape right from the time I first got it back in the seventies. I'll give it a 9!
You must log in or register to reply here.
Share:
Facebook Twitter Reddit Pinterest Tumblr WhatsApp Email Link