1. Prelude and The Sound of Music
2. Overture and Preludium
3. Morning Hymn and Elleluia
4. Maria
5. I Have Confidence
6. Sixteen Going on Seventeen
7. My Favorite Things
8. Climb Ev'ry Mountain

Like some other, older RCA Quad8 titles, this one suffers from being remixed--such as it is--from the 3-track session tapes; at least, that's what the mix sounds like to me, for there isn't a lot of discrete activity in the years. Rather, we get good separation in the front speakers and some discrete sounds in the back, but there is also a lot of ambience in the rears, too, and not a lot going on otherwise. The listener immediately picks up on these limitations, and while the choice on RCA's part to release this was understandable--it was the label's best-selling album not only of the '60s, but up to that point in their history--it wasn't, if listening is proof, worthy of a quad release (if you're a fan, though, fascinating for what it is). I give it a '5' for effort, but most quad fans would probably be well to steer clear of this one, it's no big deal.

was this released as a q4 back in the day? i can't seem to find any info as to its existance.

i have a 4 channel copy of it but i don't remember if the source (37 years ago!) was the 8 track or reel version.
on the audiotape box the tape is in i didn't note the source player, darn it.

if a tape is copied from an 8 track tape wouldn't the 'clunks' at program changes be audible? i haven't heard any yet.

Having just listened to an 'updated' (ahem) 'version' that sounds far superior to my old beaten Q8, the limitations are obvious but whoever remixed this one made sure the sonics filled the room. One notices, for instance, when there are orchestral passages without vocals, it's like being in a concert hall with different resonances in each channel, offering that cavernous sound you only hear under those conditions. Hearing "Do Re Mi" again, however, reminded me of why the only "Do Re Mi" I care about (aside from cold hard cash) is the song of that title that Lee Dorsey and Dusty Springfield recorded. In other words, while there is a charm to "My Favorite Things" I remain confounded by why people bought the original album in droves and kept it in the charts for well beyond four years.

Or maybe seeing Julie first as Mary Poppins (a far, far superior soundtrack that might have made an interesting quad title) as a nine-year-old spoiled me. She was so good in that film and the singing just right. Here, she and everyone else overdoes the enthusiasm AND the volume--almost everything sung is enervated, as if even the kids had been dosed with too much caffeine (or uppers). When one compares these renderings to the original 1959 cast album with Mary Martin, well....Mary might have been a better musical choice but of course Julie was hot at the time (and how could she have been declined as Eliza Doolittle for the film version of MY FAIR LADY? Stupid, but it opened the door for her to play Mary Poppins--and snag an Oscar for it. Which remains a rare example of Justice at the otherwise dubious movie Academy).

And like the film, the album is too long to sustain what little it has going on. If anyone can explain its strange allure and why it played well beyond any expectations--essentially rescuing 20th Century-Fox from liquidation--this is one viewer/listener who would like to know. For almost fifty years its charms have eluded me...REALLY eluded me. A lot of trendy slop--from Ssgt. Barry Sadler to Vanilla Ice and beyond--can at least be explained to some degree. But THE SOUND OF MUSIC is a lavish, colorful, hopelessly bland load of piffle that should have been reasonably successfully for a time and then gone away. But like that Energizer Bunny......

westgate said:
if a tape is copied from an 8 track tape wouldn't the 'clunks' at program changes be audible? i haven't heard any yet.
Click to expand...

Can't believe I missed this query. Of course, since stereo 8 track is 2 tracks and 4 rotations of the tape (8 track) and quad tapes 4 tracks and 2 rotations of the tape (8 track) there would not be that odd 'click' sound of the tape splice/trigger for a quad tape except for Program 1/2 compared to a stereo 8's 1/2/3/4, which is why so many 8-tracks would make perverse listening today if only to hear a fade for longer tracks that move from one run of the tape to the next. Of course any 'transfer' or 'conversion' of such a tape would remove the splice. Which can also be done for stereo 8-track transfers, but what would you do about the fades or abrupt cuts (without fade) from one track to the next? Simply put, 8-track sucked and was doomed from inception, but ran roughshod over the commercial landscape until it was finally killed in the late '80s.

Aside from the generally dubious quality of the tape used for 8-tracks, the fact that any tape runs a minimum of two times over the head and with the wear and tear of the mechanics to get it to move, coupled with the inherent heat some players gave out, and a lack of cleaning the deck heads, capstans, etc....a regularly used 8-track tape--let alone a quad, which received half the punishment--was doomed to an early obsolescence.

My problem with the Q8 of this album is that it was used when I bought it (no way in Hades would I've bought it sealed!) and had been used a bit...hissy, a bit 'jerky' at times (slight changes in pitch)..and I didn't SOM to begin with.

Ed Bishop said:
Like some other, older RCA Quad8 titles, this one suffers from being remixed--such as it is--from the 3-track session tapes; at least, that's what the mix sounds like to me, for there isn't a lot of discrete activity in the years.
Click to expand...

Hmm, I wonder if this one wouldn't be a good candidate for a 3 Channel Stereo remastering by Analogue Productions?

bmoura said:
Hmm, I wonder if this one wouldn't be a good candidate for a 3 Channel Stereo remastering by Analogue Productions?
Click to expand...


Not being a fan of the film (to say the least! ) I've never really compared the stereo Lp to the Q8 beyond the fact that the latter sounds much different from the former, at least in ambiance and separation (which is to say, it ain't bad, but doesn't seem 'right' somehow). It's possible that some (maybe all?) of the material was culled from the multi-track tapes used to assemble the 'roadshow' movie mix back in the day, when the movie first appeared at 'premium prices' before being sent out nationwide to any theater worth the trouble at 'popular prices.' But as we know, original cast albums were rarely recorded 'remote' from 'the stage' but in a controlled studio environment, as any mainstream recording artist would be subject to. Movie soundtracks, in general, tend to be different and sometimes very much so, though there are obvious exceptions like the monaural ZORBA THE GREEK (stereo Lp rechanneled) which sounds just bad but genuine enough to have been dubbed from what was used for the actual soundtrack (edited for length, of course).

Had the soundtrack of WEST SIDE STORY been issued in quad back in the day (which would have made sense; a mystery why it wasn't done) it might have been a delight, at least to this kid (the whole project was a glossy fraud, but I still embrace the fraudulence). THE SOUND OF MUSIC remains simply 'nice,' which would be Ok if it weren't so loud and insistent with all its bloated sonic grandeur. The Q8 exaggerates the relative banality of it all. If I did like the music, though, think I'd just pull out an old mono vinyl pressing and put up with that. Flat but very even sound.

Just curious: has anyone checked out the vinyl edition of this? I assume the mix would be the same, but maybe there was clarity to the sound compared to the Q8 and reel releases. (I don't have this - this is just a picture from my archive.) 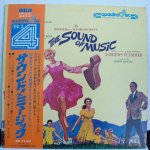 The reel tape would be the best reference, although a well cut CD-4 in top condition should come near matching it.

The Lp went for $50 on eBay this past March, so it's not an expensive title to land. Presumably all the tracks from the album are included (unlike, say, the Guess Who's AMERICAN WOMAN). Typical of Japan releases, there is an enclosed Lp-size booklet, which is probably nothing like the original that came with the old '65 mono/stereo album editions.

Ed Bishop said:
The reel tape would be the best reference, although a well cut CD-4 in top condition should come near matching it.
Click to expand...

I wonder if the American reel and Japanese CD4 would be the same mix? Would it be 4 channel simulated from a 3 channel source like the Van Cliburn 8-track? Or different performances or takes?

The thing to remember is that soundtrack album versions and film versions are often two different creatures. As some classical fans caught right away, some of the material on the 2001: A SPACE ODYSSEY MGM Lp didn't exactly jive with what was heard in the movie, though that didn't stop it from becoming a million-seller (and 120 weeks on the charts--the album was kind of a sleeper, as the movie was after the controversy died down).

Not being a fan of TSOM, I'm nonetheless interested in hearing the quad mix in a decent (rather than muddy) light. The songs *seem* to match up fairly close to the movie versions in some instances, though mix and edit are probably different for many. My guess (that's all it is) is that RCA made one quad mix (probably in NYC) which was then used for all subsequent versions, including the Japan quad CD-4. How Japan mastered that tape, though, could be different than intended if the channel placement was changed (easy to do). Either way it shouldn't be like the Cliburn situation or, for that matter, similar concert performances (the upcoming Belafonte release would be essential just to hear, whether or not you're a fan).

As for AF, I doubt this would be a title for them. Popular as the movie has been over the years (and the soundtrack Lp may well have sold more copies than any other US album of the '60s, and that includes any Elvis or Beatles), can't imagine much of an audience for a stereo reissue, let alone a quad audiophile edition. But, you never know, maybe Marshall's a fan?

Ed Bishop said:
As for AF, I doubt this would be a title for them. Popular as the movie has been over the years (and the soundtrack Lp may well have sold more copies than any other US album of the '60s, and that includes any Elvis or Beatles), can't imagine much of an audience for a stereo reissue, let alone a quad audiophile edition. But, you never know, maybe Marshall's a fan?